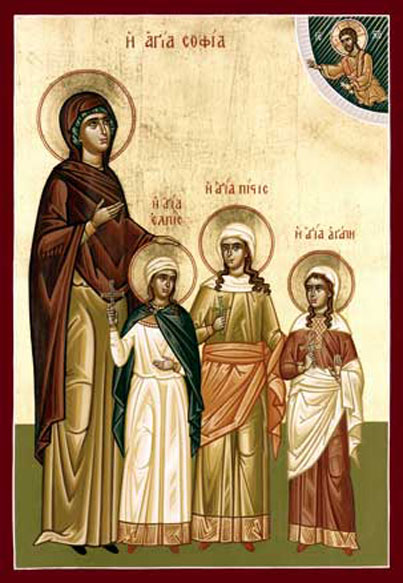 In the same way, any child who grows up surrounded in an atmosphere of prayer in the home will, almost certainly, find himself drawn into that pattern of regular and effortless prayer.

You may think it odd of Fr Gregory (Fr.Gregory Hallam is the priest-in-charge of St. Aiden’s Church and the Web Editor of The Orthodox Web Site – Ed.) to ask someone with no direct knowledge of the subject to speak about the Raising of Children, but he is really being, as usual, very astute. Not only does the outsider often see more of the game, but this particular aspect of the Eastern religion was the main cause, many years ago now, of my initial interest in Orthodoxy. I say this, because it didn’t take me long, as an Anglican parish priest, to see that in the introduction to, and raising of, children in the Christian faith, the Eastern Churches were approaching the subject in a much more intelligent manner than the Western Churches.

On paper, the differences do not appear to be great, but in practice there is all the difference in the world. As you probably know, the Western Church has generally speaking, a three-step approach to Christian initiation. A baby is baptised and then waits a good number of years before being confirmed and in my early days, then had another wait of perhaps days or even weeks, before receiving Holy Communion. The results of this in practice were :–(1) Most parents expected “someone else” to inform their child about the Christian faith—day or Sunday school teachers, the parish priest,–any one, but them. (2) If a baptised child was brought to Church, he/she could not receive Holy Communion and so came to regard themselves as second-class Christians. (3) A lot of children, baptised as infants, were never brought back for Confirmation and Holy Communion. This meant that in any parish there was a significant number of half-baked Christians.

That system, good in theory, failed in practice. When someone explained to me the Orthodox procedure of dealing with Christian initiation, I realised at once its advantages. First, there are no gaps—the child is a complete Christian like his peers and a vessel of the Holy Spirit as soon as he is baptised and chrismated, and this in itself, is a real source of strength. Secondly, the service makes it quite clear to the family that as a result of Christian initiation it is THEIR responsibility to see to the child’s Christian formation ie to teach him as much as possible in the home, but also to bring him to the Liturgy where he can learn both from the action and the atmosphere and also receive the saving Gifts of Holy Communion, so that Our Lord and the Holy Spirit may play their proper part.

And this, I believe, is the bedrock of the whole Orthodox approach to the raising of children. But notice one interesting feature: After the baptism and chrismation, the focus concerning the raising of children as far as Orthodoxy is concerned, changes from the church to the home. This is because so much responsibility for the Christian formation of the child has been placed on the shoulders and in the prayers of the parents and god-parents. As St John Chrysostom says “their example is everything” He is being careful there to guard against any form of co-ertion. He is stressing that the words they use; their manner of speaking to each other and to their child, will have decisive influence on the child’s own way of speaking.

In general, three main elements are stressed in the raising of Orthodox children. The first obviously is the need for a loving background to the child’s whole life and this is shown to them as an image of God’s love for mankind. This will be apparent in very many aspects of life but the most testing will come when the child misbehaves. Obviously, every child has to learn the difference between right and wrong. Children are very sensitive to the meaning of “justice” and cannot understand when their parents are violently angry over some small misdemeanour. Often this arises when the child is thought to have “shown up” their parents in public. The parents should remember that when they warn the child and threaten punishment, they should keep the warning within the limits of what they will really do. And after reprimand there must come a readiness to forgive. Often children are left with the lingering thought that their parents do not love them because they are naughty. As in all areas of forgiveness, we do not like the sin, but we love the sinner, and children can be brought to see this.

In the same way, if a child owns up to a misdeed, or shows repentance, the response must be tempered accordingly. This does not mean that we even seem to condone the sin, but encourage them not to hide it. Deceit is a much more serious condition than any amount of naughtiness and deceit between parents and child, either way, will make it increasingly difficult to maintain a loving relationship in the family.

In the same way, any child who grows up surrounded in an atmosphere of prayer in the home will, almost certainly, find himself drawn into that pattern of regular and effortless prayer. By “effortless” there, I don’t mean that we don’t have to put effort into our prayers; I mean that sort of home where time spent in prayer is taken for granted without some great up-heaval of routine. “Now we will have our time of prayer” always seems to me to be more of a threat than a promise.

By the example of love and prayer in a home, a child’s heart will be touched and without any long winded explanations, he will be drawn into prayer as a recognised activity and without asking for proofs of God’s presence. The key here is loving persistence with lots of variations:—use of icons and singing; plenty of actions like the sign of the Cross; reading and drawing and miming all of which can be employed at different time to focus on the one thing necessary. What is that? Surely it is to teach them to love God as God loves them, and slowly, as they grow up, to go on to help them find what God wants for them in this life.

The big question and one which many fear to face, concerns obedience. But again, the example of the parents is over-riding importance. If they are seen as not showing respect for each other’s will, their child can never come to terms with obedience. All pilgrims of the Christian life have to realise that obedience is spiritually vital, and children who do not get this point in their earliest days will find it very much harder later in life. Children who develop tricks for getting their own way will never learn to love, for true love is always a by-product of obedience. Probably it has to begin with variations of “do as you are told” but as the child grows, it must come to mean “prefer the will of another out of love”.

St John Chrysostom also urges parents to watch over the senses of the children. We can’t put blinkers on them but it is possible to ensure that they see something other than the negative scenes which too often appear on TV. We can help them to appreciate the beauty which God has created in His world. This can be done through taking them from the cities into the country but also by having some items of natural beauty in our homes. Moreover children have to be shown how to appreciate the beauty of music and the arts. Sometimes schools will tackle this but parents will do well to supplement what is taught there.

The possibilities are endless and each child is different, anyway. Perhaps it is best to try to ensure that children are conceived, born, and brought up surrounded by love and prayer and truth and beauty, so that they will grow up as spiritual persons and in due course, fulfil their human vocation as children of God