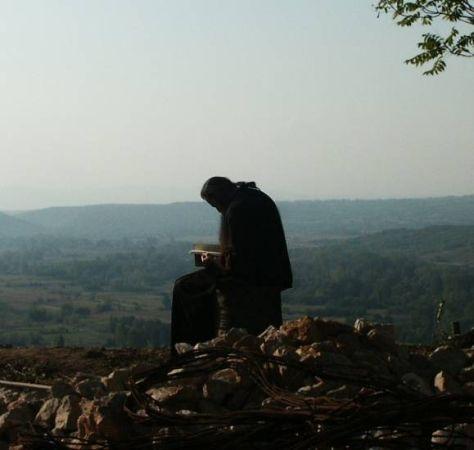 This presentation is based on the research that I undertook for a book titled Imagine That… : Mental Imagery in Roman Catholic and Eastern Orthodox Private Devotion, published in paperback in February of 2009 with the blessing of His Eminence Archbishop Kyrill of San Francisco. The work is an analytical comparison of Roman Catholic and Eastern Orthodox attitudes toward mental imagery. In this presentation, I wish to focus specifically on the Orthodox tradition of prayer.

Eastern Orthodoxy displays a great degree of uniformity in following a path of stillness of thought and silence of mind to achieve the prayer of heart in private devotion. Saint John Climacus writes in The Ladder (28:19) that “the beginning of prayer consists in chasing away invading thoughts…” (285) The mind is to be freed from all thoughts and images and focused on the words of prayer. Further in the chapter on prayer (28), St. John instructs not to accept any sensual images during prayer, lest the mind falls into insanity (42; 289); and not to gaze upon even necessary and spiritual things (59; 292).

Unlike Roman Catholicism, the Orthodox Tradition does not encourage the use of mental imagery. In fact, it almost appears to forbid sensory imagination during prayer altogether. In the words of one of the contemporary Orthodox elders, Abbot Nikon (Vorobyev) (1894-1963), “that, which sternly, decisively, with threats and imploring is forbidden by the Eastern Fathers—Western ascetics strive to acquire through all efforts and means” (424).

One of the best summaries of the Orthodox patristic tradition of prayer is contained in the works of Bishop Ignatii (Bryanchaninov) (1807-1867), a nineteenth-century scholar, theologian, and saint. Having studied the works of both Eastern and Western saints in their original languages, St. Ignatii was also known as a man of prayer, and his writings breathe not only of academic vigor, but of personal practical experience as well.

St. Ignatii certainly acknowledges that there are visions from God which are shown to those “who are renewed by the Holy Spirit, who put off the old Adam, and put on the New” (Works 2004, 1:86). “Thus,” he writes, “the holy Apostle Peter during prayer saw a notable sheet descending from heaven. Thus, an angel appeared to Cornelius the centurion during prayer. Thus, when Apostle Paul was praying in the Jerusalem temple, the Lord appeared to him and commanded him to immediately leave Jerusalem…” (1:86) But St. Ignatii (Bryanchaninov) categorically forbids seeking or expecting such “supernatural states”:

The praying mind must be in a fully truthful state. Imagination, however alluring and well-appearing it may be, being the willful creation of the mind itself, brings the latter out of the state of Divine truth, and leads the mind into a state of self-praise and deception, and this is why it is rejected in prayer.

The mind during prayer must be very carefully kept without any images, rejecting all images, which are drawn in the ability of imagination… Images, if the mind allows them during prayer, will become an impenetrable curtain, a wall between the mind and God. (1:75)

Saint Isaac of Syria (d. c. 700), a bishop and theologian, writing centuries earlier, conveys a similar warning to those who desire visions, saying that such a person is “tempted in his mind by the devil who mocks him” (174).

Specifically addressing devotees’ visions of the Lord and the saints, St. Ignatii points out that human imagination can lead to fake sensory experiences, falsely recognized by the person as originating outside of his or her mind:

Guard yourself from imagination, which can make you fancy that you see the Lord Jesus Christ, that you touch and embrace Him. This is empty play of puffed-up and proud self-opinion! This is deadly self-praise! (1:33)

If during your prayer there appears to your senses or spontaneously in your mind an image of Christ, or of an Angel, or of any Saint—in other words, any image whatsoever—do not accept this apparition as true in any way, do not pay any attention to it, and do not enter into a conversation with it. Otherwise, you will surely suffer deceit and most serious damage to your soul, which has happened to many. (1:75-6; see also Philokalia 5:233)

Imagining the Lord and his saints gives to the mind as if materiality, leads it to the false, prideful opinion of self—leads the soul into a false state, a state of deceptive self-praise. (1:76-7)