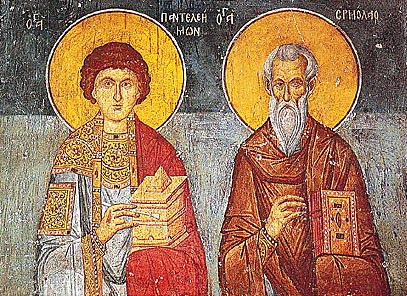 Saints Panteleimon and Hermolaus. Byzantine wall-painting of the late 13th century at the Church of Panagia Olympiotissa at Elassona, Greece.

Pantaleon was born in Nicomedia of a Christian mother and a pagan father. His mother was called Eubula and his father Eustorgius. As a young man he studied the science of medicine. The priest, Hermolaus, invited Pantaleon to be with him and taught him the Faith of Christ and baptized him. Pantaleon miraculously cured a blind man whom the other doctors treated in vain; he cured him by the power of Christ and baptized him. Out of envy the doctors accused Pantaleon of being a Christian and he went before the Emperor Maximian to stand trial. “He stood before the earthly king in body but in thought he stood before the heavenly King.” Before the emperor, he freely declared that he was a Christian and, before the eyes of the emperor, he healed a paralytic of a long-standing illness.

More…This miracle drew many pagans to the Faith of Christ. The emperor subjected him to torture but the Lord appeared to him on several occasions and delivered him whole and unharmed. Saint Hermolaus with Hermippas and Thermocrates were then martyred. Sentenced to death, Saint Pantaleon knelt for prayer. At that moment the executioner struck him on the neck with a sword and the sword broke as though it were made of wax. The executioner was unable to execute him until the saint completed his prayer and until Pantaleon told him to behead him. His relics possessed the ability to heal. Pantaleon was executed under an olive tree which, after that, became all adorned with fruit. Panteleimon [as he was named] means, “all merciful” “all compassionate.” The All-merciful God received his righteous soul and glorified him among His great saints. This wonderful martyr suffered honorably for Christ in his youth, on July 27, 304 A.D. Saint Panteleimon is invoked in prayers at the time of the “Blessing of Waters” and in the blessing of the holy oils used in the “The Sacrament of Holy Unction,” together with Saint Hermolaus and the other unmercenary saints and wonder-workers. A most beautiful church dedicated to this saint is located on Holy Mount Athos.