Where Are Those Who Say There is No God?

Where Are Those Who Say There is No God? 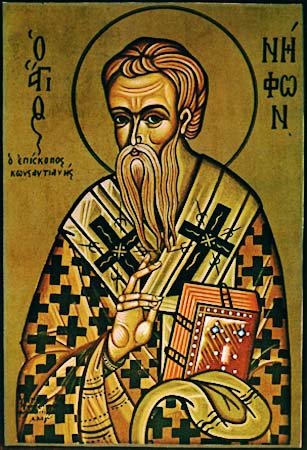 St Kronid, in his remarkable first-hand account of his long struggle with severe depression and blasphemous thoughts, writes: “My only consolation and joy was, in my free minutes, to open the book of The Lives of the Saints to read about Niphont, the wonder-worker of Cyprus, who suffered similar thoughts for the course of four years.” He is here referring to the following incident from the life of St Niphon (the Russians call him Niphont), Bishop of Constantia in Cyprus (commemorated December 23):

The Lord allowed a special affliction to come upon Niphon, so that tried like gold in a furnace, he might be proved worthy of divine grace. The man of God was delivered into the power of Satan, and for four years was out of his mind. Once, while keeping an all-night vigil in his room, the saint heard a sudden, frightful noise, moving from right to left. He was terrified and wondered what it might be. Immediately the devil appeared, raging and roaring and filling the blessed one with such trepidation that his thoughts bebecame utterly confused. Coming to himself a little, Niphon tried to pray and make the sign of the Cross. Seeing this, the devil screeched, “Leave off your entreaties to God, and I will put an end to my attacks!”

Niphon answered, “I will never obey you, unclean spirit. If God has given you permission to destroy me, so be it; I submit gratefully. If not, then know that you will soon be vanguished.”

“You are deceived, Niphon,” lauged the devil. “There is no God; have you ever seen Him?”

The wicked spirit continued raving like this for some time, but the saint repeated, “You speak like a fool, devil, for the fool hath said in his heart, there is no God.” Nonetheless, although he wished to pray, Niphon could not. He could say the words, but could not concentrate on them. As a result, he became downcast and his understanding confused; he was deprived of reason and endured great anguish. Whenever he came to hismelf a little, the demon would appear and whisper, “There is no God!” To this the saint could only reply: “I may fall into fornication, I may commit murder, I am capable of any sin; but I will never renounce my Christ!”

“What are you saying? There is no Christ,” the devil would snarl. “I control everything and rule over all. Who told you that there is a God or a Christ?”

“You will not decieve me, ruler of darkness! Depart, enemy of righteousness!” Niphon would shout.

The devil, however, would not go away, but continued to assail him, clouding his intellect and trying to force him to renounce God. During that period, Niphon persisted in his attempts to pray. Thus once, while he was making supplication, his mind filled with doubt as to whether God exists, he looked up and stretched out his hands to the icon of the Saviour, and sighing from the depths of his heart, cried, “O God, my God, why hast Thou forsaken me? Grant me firm conviction that Thou art God and that there is none other than Thee, lest I submit to the counsel of the enemy.”

With this, the face of Christ on the icon began to shine like the sun, and Niphon could smell a wondrous frangrance. Casting himself to the floor in astonishment, he exclaimed, “Forgive me, O Master, for having doubted Thee! Thou art my God, and henceforth I will believe without question that Thou alone art Lord and Creator of all things.” A moment later, while still lying on the floor, he looked again at the icon and witnessed another miracle: the image of the Master moved its eyes and brows as though it were alive. Niphon cried, “Blessed is my God, and blessed is His glorious name, now and unto the ages! Amen.” From that day on, the grace of God rested upon Niphon, since he had completed the four years of trial.

The saint’s face was ever brigth and joyful, perplexing those who knew him before. “What does this mean?” they would ask. “For years he was gloomy, but now he is always happy.” The reason he was constantly cheerful was that he no longer feared the demons; instead, he mocked them, saying, “Where are those say who there is no God?”

May the Lord, through the prayers of Saints Niphon and Kronid, have mercy on us and strengthen us!