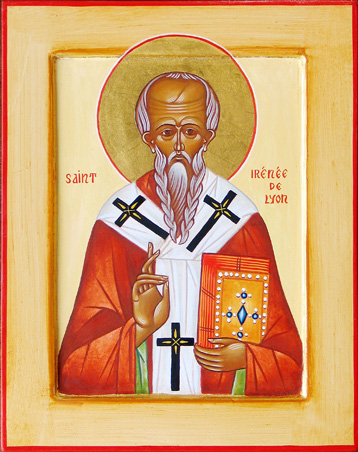 Information as to his life is scarce, and in some measure inexact. He was born in Proconsular Asia, or at least in some province bordering thereon, in the first half of the second century; the exact date is controverted, between the years 115 and 125, according to some, or, according to others, between 130 and 142. It is certain that, while still very young, Irenaeus had seen and heard the holy Bishop Polycarp (d. 155) at Smyrna. During the persecution of Marcus Aurelius, Irenaeus was a priest of the Church of Lyons. The clergy of that city, many of whom were suffering imprisonment for the Faith, sent him (177 or 178) to Rome with a letter to Pope Eleutherius concerning Montanism, and on that occasion bore emphatic testimony to his merits. Returning to Gaul, Irenaeus succeeded the martyr Saint Pothinus as Bishop of Lyons. During the religious peace which followed the persecution of Marcus Aurelius, the new bishop divided his activities between the duties of a pastor and of a missionary (as to which we have but brief data, late and not very certain) and his writings, almost all of which were directed against Gnosticism, the heresy then spreading in Gaul and elsewhere. In 190 or 191 he interceded with Pope Victor to lift the sentence of excommunication laid by that pontiff upon the Christian communities of Asia Minor which persevered in the practice of the Quartodecimans in regard to the celebration of Easter. Nothing is known of the date of his death, which must have occurred at the end of the second or the beginning of the third century. In spite of some isolated and later testimony to that effect, it is not very probable that he ended his career with martyrdom. His feast is celebrated on 28 June in the Latin Church, and on 23 August in the Greek.

Irenaeus wrote in Greek many works which have secured for him an exceptional place in Christian literature, because in controverted religious questions of capital importance they exhibit the testimony of a contemporary of the heroic age of the Church, of one who had heard St. Polycarp, the disciple of St. John, and who, in a manner, belonged to the Apostolic Age. None of these writings has come down to us in the original text, though a great many fragments of them are extant as citations in later writers (Hippolytus, Eusebius, etc.). Two of these works, however, have reached us in their entirety in a Latin version:

Of his other works only scattered fragments exist; many, indeed, are known only through the mention made of them by later writers, not even fragments of the works themselves having come down to us. These are

The four fragments which Pfaff published in 1715, ostensibly from a Turin manuscript, have been proven by Funk to be apocryphal, and Harnack has established the fact that Pfaff himself fabricated them.