“These Truths We Hold” (Part IV)

“These Truths We Hold” (Part IV) 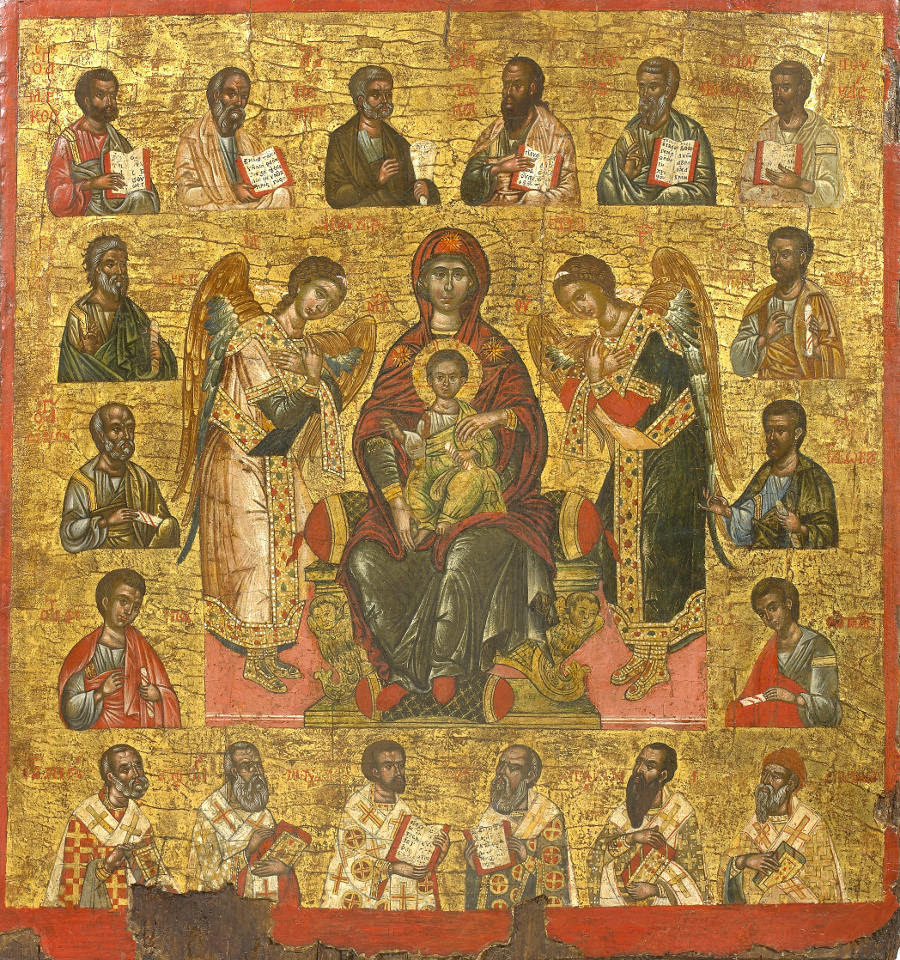 Enthroned Mother of God and Child with Archangels.Circa 1600

The Patriarchate of Constantinople again, at least nominally, became independent after World War I and the rise of modern, secular Turkey, although greatly reduced in size. At present the Patriarch’s jurisdiction includes Turkey, the island of Crete and other islands in the Aegean, the Greeks and certain other national groups in the Dispersion (the Diaspora) — in Europe, America, Australia, etc. — as well as the monastic republic of Mt. Athos and the autonomous Church of Finland. The present position of the Patriarchate in Turkey is precarious, persecution still exists there, and only a few thousand Greek Orthodox still remain in Turkey.

Located on a small peninsula jutting out into the Aegean Sea from the Greek mainland near Thessalonica, Mt. Athos is a monastic republic consisting of twenty ruling monasteries, the oldest (Great Lavra) dating to the beginning of the 11th Century, as well as numerous other set-tlements — sketes, kellia, hermitages, etc. Of the twenty ruling monasteries, seventeen are Greek, one Russian, one Serbian, and one Bulgarian. (One, Iveron, was originally founded as a Georgian monastery, but now is Greek.) Perhaps 1,500 Monks are presently on the Mountain, a dramatic decline from the turn of the Century when, in 1903, for example, there were over 7,000 Monks there. This is due, in great part, to the halt of vocations from the Communist countries, as well as to a general decline in monastic vocations worldwide. However, there appears to be a revival of monastic life there, particularly at the monasteries of Simonopetra, Dionysiou, Grigoriou, Stavronikita, and Philotheou, and two Monks have shone as spiritual lights there in this Century – the Elder Silouan († 1938) of St. Panteleimon’s Russian Monastery and the Elder Joseph († 1959) of the New Skete.

The Orthodox Church of Finland, an autonomous Church (self-governing, except that the primate is confirmed by the Patriarch of the Mother Church, in this case Constantinople) was originally the fruit of the Monks of Valaam Monastery on Lake Ladoga, who spread Orthodoxy among the Finnish Karelian tribes in the 14th Century. Until 1917, the Finnish Church was part of the Russian Orthodox Church, but with the independence of Finland in 1917 and the unsettled situation in Russia after the Revolution, since 1923 it has been under the spiritual care of Constantinople. There are, today, approximately 66,000 Orthodox faithful in the Finnish Orthodox Church.

One of the original ancient Patriarchates, since the Monophysite Schism after the Council of Chalcedon (451), the numbers of the faithful of the Patriarchate of Alexandria have remained small — approximately 300,000 faithful in Africa, most of whom are non-Greek Christians in Central Africa (primarily Kenya and Uganda). The rapid expansion of Orthodoxy in Central Africa in this Century has been most remarkable since it sprang up without benefit of Orthodox missionaries, and the Orthodox Church of this region promises to become an important force in the life of the Alexandrian Patriarchate.

Like Alexandria, the ancient Patriarchate of Antioch was severely decimated by the Mo-nophysite Schism and Turkish depredations, and now numbers some 500,000 faithful in Syria, Lebanon and Iraq, as well as an emigrant population in America. Its Patriarch, who lives in Da-mascus, is an Arab, as are most of the clergy, and the bulk of its faithful are Arabic and Arabic-speaking, its liturgical services being celebrated in that language.

This ancient Church, whose jurisdiction includes Palestine and Jordan, never was large in numbers, but always held a special place in Orthodoxy due to her custody of the Holy Places of Palestine. The Patriarch of Jerusalem is a Greek, but the majority of the clergy and faithful are Arabic, numbering about 60,000 souls.

Since the Russian Revolution, the Church of Russia has been severely persecuted by the atheist state and the numbers of her faithful, clergy and institutions have been drastically re-duced. In 1914, there were officially 54,457 churches, 57,105 Priests, 1,498 monasteries and convents, 4 theological academies, 57 theological seminaries, and 40,150 religious schools, with perhaps 100,000,000 faithful. By 1947, the figures read: 22-25,000 churches, 33,000 Priests, 80 monasteries and convents, 2 theological academies, 8 theological seminaries, and no other reli-gious schools. (This was after a certain liberalization following World War II!) At the present time there are perhaps 30,000,000 active Orthodox Christians. By 1966, after renewed persecu-tion, only 3 seminaries were still functioning and by the 1970’s, only 12 monasteries and convents were open, as well as about 7,000 churches. Nonetheless, Orthodoxy is still alive in Russia, and, despite reduced membership figures, this Church remains the largest in the Orthodox world.

Founded in the 4th Century by St. Nina, Equal-to-the-Apostles († 355 — commemorated January 14), this Church had become autocephalous (self headed) in the 8th Century, but was incorporated into the Russian Orthodox Church, with the subjugation of the Caucasus, in 1811, receiving her independence again in 1917. The ranks of her faithful and clergy have been severely diminished since the Communist takeover, and now there are about forty functioning churches (2,455 in 1917), served by less than 100 Priests, out of a population of over 2,000,000. The head of this Church is styled the Catholicos — Patriarch of All Georgia.

With the gradual crumbling of the Ottoman Empire in the 19th Century, the Serbian Church received her independence again in 1879. This Church has fared better than some in the Communist bloc, but many of the problems common to the Churches there (diminished ranks of clergy, closing of churches, etc.) are found here also. There are large numbers of Orthodox Ser-bians in the Dispersion, many of whom are to be found in America, Australia and Canada. The primate of the Serbian Church is the Patriarch, who lives in Belgrade.

As in the other Balkan countries, with the independence movement of the 19th Century, the Church of Romania received her independence. The nation became a Principality in 1856, and its Church was organized in 1864. Romania became an independent Kingdom in 1881, and the autocephaly of her Church was finally recognized in 1885 by Patriarch Joachim IV of Con-stantinople. In 1925, the Church of Romania became a Patriarchate, whose Patriarch lives in Bu-charest. In numbers of Orthodox faithful, this Church is the second largest in world Orthodoxy, and the persecution by the atheists has not been as severe as in other Communist countries.

With the conquest of the Balkans by the Turks, the ancient Bulgarian Patriarchal See of Trnovo was suppressed and the Bulgarian Church was placed under the jurisdiction of the Pa-triarch of Constantinople. On April 3, 1860, however, Bishop Hilarion openly declared indepen-dence from Constantinople by omitting the Patriarch’s name at the Divine Liturgy, and on March 11, 1870, the Turkish Government recognized a Bulgarian Exarchate in Constantinople. In 1872, the Patriarch of Constantinople excommunicated the Bulgarian Church, but the de-facto autoce-phaly of this Church was finally recognized in 1945. As in Romania, the persecution of the Church has not been as severe as, for example, in Russia, but monasticism is in decline and there are few young Monks. Generally, Church life is more active, however, than in Yugoslavia with its more liberal policies.

This ancient Church has been independent since the Council of Ephesus (431) and, al-though suffering under the Turkish yoke, is still strong with over 700 Priests and over 400,000 faithful. For a time, the Turkish system, whereby the primate of the Church was also the political leader of the Greek population, was continued after the liberation of the country in 1878, which explains the role played by the late Archbishop Makarios, who ruled Cyprus as President, as well as being the primate of her Church.

The first national Church to emerge from the independence struggles of the 19th Century was the Church of Greece. On the Feast of the Annunciation, March 25, 1821, Germanos, the Archbishop of Patras, raised the banner of revolt against the Turks (which cost the Patriarch of Constantinople, Gregory, his life). This war of independence was successful and, as the Hierarchs of the Greek Church did not wish to remain subject to a captive Patriarch in Constantinople, in 1833 a synod of Greek Bishops declared their Church autocephalous, although this was not officially recognized by Constantinople until 1850. In 1864, the Diocese of the Ionian Islands was added to the Church of Greece, and in 1881 the Dioceses of Thessaly and a part of Epirus were likewise joined to her. This Church is the third largest in the Orthodox world and is ruled by a Holy Synod, presided over by the Archbishop of Athens.

Christianized by both Greek and Latin missionaries, Albania, part of ancient Illyricum, had both Latin and Greek rite Christians, with close ties both to Rome and Constantinople, until the Turkish conquest of 1478-9, when half the population became Moslem and a small minority remained Christian — Latin in the North and Orthodox in the South. On November 28, 1912, Albania declared its independence from Turkey, and on October 26, 1922, a Church Council at Berat declared the Church of Albania independent of Constantinople, which was finally recog-nized by that Hierarch on April 12,1937. After World War II, with the seizure of power by the Communists, the Church has suffered terribly, her clergy forbidden to conduct services, as the regime has officially declared religion to be dead in Albania. Since the death of the last Primate, Damian, the primal See of Tirane remains vacant.

The Church of Poland has been autocephalous since 1924, although this independence has not been recognized by Constantinople. Consisting primarily of Orthodox Christians from Western Byelorussia, which was added to Poland’s territory after World War II, this Church is headed by a Metropolitan who lives in Warsaw.

The Church of Czechoslovakia has been autocephalous since 1951, although, A as in the case of Poland, this has not been recognized by the Patriarch of Constantinople. The Czechoslo-vak Church is composed, primarily, of former Uniates, who were forcibly joined to the Orthodox Church by the Communists in 1950 (many returned to Roman Catholicism in 1968). The Church is headed by a Metropolitan who lives in Prague.

The ancient Church of Sinai, which is actually an autonomous Church consisting of a single monastery, St. Catherine’s, at the foot of Mt. Sinai — the Mountain of Moses. The Abbot of this Monastery is always an Archbishop, elected by the Monks of the Monastery , although he is consecrated by the Patriarch of Alexandria and lives in Cairo. The Monastery, at the present, consists of only a few Monks, most of whom are very old.

The Church of Japan was founded by St. Nicholas (Kassatkin), later Archbishop of Japan († 1912 — commemorated on February 16), a Russian missionary, who knew St. Innocent of Alaska. At the present there are about 40 parishes and about 36,000 faithful. The autonomy of this Church was proclaimed by the Patriarch of Moscow in 1970, and it is headed by a Metropol-itan, who lives in Tokyo, and one other Bishop, who, although chosen by the Church of Japan, must be confirmed by the Church of Russia