“These Truths We Hold” (Part XV)

“These Truths We Hold” (Part XV) 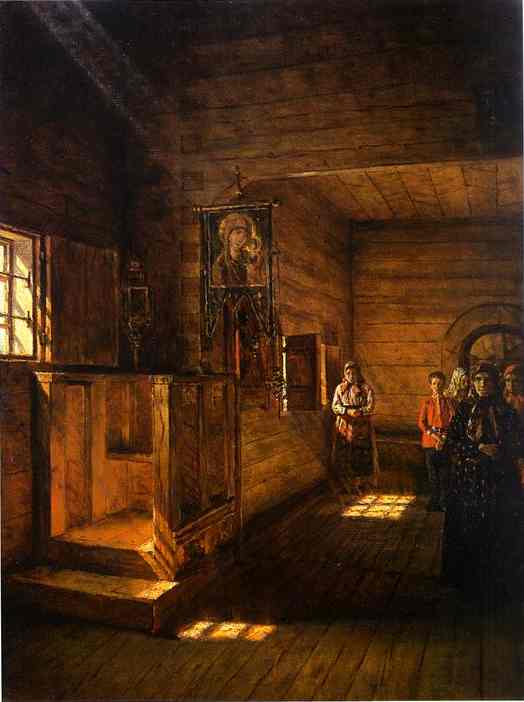 Interior of the Church of St. John the Evangelist on the Ishna, near Rostov Yaroslavsky. Painting of Vasili Vasilyevich Vereshchagin 1888

Orthodox worship is characterized by a complete utilization of the senses — sight, smell, hearing, speech and touch. We see the candles, Icons, frescoes, etc., we hear the sounds of singing and reading, at times lifting up our own voices, and we smell the characteristic odor of the incense. The whole of the human person is involved in worship, and important among the senses is the actual deportment of the human body. The attitude of the Orthodox Believer to worship is reverential, and certain types of bodily movements are utilized to reinforce this sense of reverential piety — we stand during the services, we make bows and prostrations, and with great frequency, we make the Sign of the Cross. Accordingly, there are several types of Bows, depending on the solemnity of the moment.

Here the worshipper prostrates the whole body, throwing the weight forwards onto the hands and touching the ground with the forehead.

The worshipper bows from the waist, touching the ground with the fingers of the right hand. Both Prostrations and Bows are preceded by the Sign of the Cross.

At certain times the worshipper merely bows the head; sometimes this is accompanied by the Sign of the Cross.

Bishops and Priests, in bestowing a blessing, make the Sign of the Cross from left to right (appearing to us from right to left), while holding the fingers in such a manner as to represent the Greek letters IC and XC — the first and last letter of the name Jesus Christ.

Seeing that bodily disposition is important in worship and spiritual life, in general, great emphasis is placed in the Orthodox Church on fasting; if one should add up all of the fasting seasons and days of the Church calendar, he would find that more than half of the year is devoted to this ascetic labor. The question might rightfully be asked, then, as to why this is so.

According to St. Basil the Great, Adam, the first-created man, loving God of his own free will, dwelt in the heavenly blessedness of communion with God, in the angelic state of prayer and fasting. The cause of this first man’s fall was his free will; by an act of disobedience he violated the vow of abstinence and broke the living union of love with God. That is, he held in scorn the heavenly obligations of prayer and fasting by eating of the Tree of Knowledge of Good and Evil. Lack of abstinence, then, was the cause of the Fall and, as a result, because of this original greed, the soul becomes dimmed, and is deprived of the illumination of the Holy Spirit.

Our Lord Jesus Christ calls all of us to salvation through self-denial (Luke 14:26) and this is addressed to the free will of fallen man: If any man would come after Me, let him deny himself and take up his cross and follow Me (Matt. 16:24). Thus, the Savior calls man to the voluntary fulfillment of those heavenly obligations, which he freely forsook, of observing prayer and fasting.

The personal example of the Lord Himself bears witness to the absolute necessity of bodily fasting. Did not the Savior fast for forty days and nights after His baptism to prepare for His earthly ministry (Matt. 4:2)? So too, many of the Saints of the Church were especially noted for their ascetic labors, which saw fasting as being of especially great importance.

In fasting the flesh and the spirit struggle one against the other. Therefore bodily fasting leads to the triumph of the spirit over the body, and gives a man power over the stomach, subdues the flesh and permits it not to commit fornication and uncleanness. Abstinence is the mother of cleanliness, the giver of health and is good for rich and poor, sick and healthy, alike. It strengthens the seeker after godliness in spiritual battles and proves to be a formidable weapon against evil spirits. As the Lord Himself said, concerning the casting-out of certain demons: This kind never cornea out except by prayer and fasting (Matt. 17:21).

This fasting, however, is not to be done out of pride or self-will; It must be observed in the praise of God and must be in accordance with the canons of the Church, since it consists in the complete renunciation of self-will and of the desires. At the same time, we must realize that for fallen man to attain perfection, even intensive fasting is insufficient, if in his soul he does not abstain from those things which further sin. Fasting is not only the abstinence from food, but also from evil thoughts and all passion, for, as the Savior says: Do you not see that whatever goes into the mouth passes into the stomach, and so passes on? But what conies out of the mouth proceeds from the heart, and this defiles a man. For out of the heart come evil thoughts, murder, adultery, fornication, theft, false witness, slander. These are what defile a man… (Matt. 15:17-20). Thus exterior fasting, without the corresponding interior fasting is in vain.

1. Meatfast — the week before the beginning of Great Lent

2. Apostles’ (Peter and Paul) Fast — from the Monday after All Saints Sunday through June 28

1. The Wednesdays and Fridays of the Year, except for Fast-free Weeks

1. Afterfeast of the Nativity of Christ to Theophany Eve — Dec. 25 through Jan. 4

2. The week following the Sunday of the Publican and Pharisee

3. Bright Week — the week after Pascha

4. Trinity Week — the week after Pentecost, concluding with All Saints Sunday

The fasting rules, found for the most part in the Typikon (mainly Chapters 32 and 33), and repeated in appropriate places of the Menaion and Triodion, are dependent on the Church’s cycle of feasts and fasts. In general, with a few exceptions, all Wednesdays and Fridays (Mondays also, in some monasteries) are kept as days of fasting, with no meat, eggs, dairy products, fish, wine or oil to be eaten. This includes, as well, the four canonical fasting periods (Great Lent, the Apostles’ Fast, the Nativity Fast and the Dormition Fast), and certain other days, including the Eve of Theophany, the Beheading of St. John the Baptist, and the elevation of the Cross. It must be noted, however, that there are many local variations in the allowances of wine and oil (and sometimes fish), such as on patronal feast days of a parish or monastery, or when the feast of a great Saint (or Saints) is celebrated which has particular local or national significance.

While most Orthodox Christians are perhaps aware of the rules of fasting for Great Lent, Wednesdays and Fridays, the rules for the other fasting periods are less known. During the Dormition Fast, wine and oil are allowed only on Saturdays and Sundays (and sometimes on a few feast days and vigils). During the Apostles’ Fast and the Nativity Fast, the general rules are as follows (from Chapter 33 of the Typikon):

It should be noted that in the Fast of the Holy Apostles and of the Nativity of Christ, on Tuesday and Thursday we do not eat fish, but only oil and wine. On Monday, Wednesday and Friday we eat neither oil nor wine…. On Saturday and Sunday we eat fish. If there occur on Tuesday or Thursday a Saint who has a Doxology, we eat fish; if on Monday, the same; but if on Wednesday or Friday, we allow only oil and wine…. If it be a Saint who has a Vigil on Wednesday or Friday, or the Saint whose temple it is, we allow oil and wine and fish…. But from the 20th of December until the 25th, even if it be Saturday or Sunday, we do not allow fish.

In another place the Typikon prescribes that if the Eve of Theophany or the Eve of the Nativity fall on Saturday or Sunday, wine and oil are permitted.

The rule of xerophagy is relaxed on the following days:

1. On Saturdays and Sundays in Great Lent, with the exception of Holy Saturday, two main meals may be taken in the usual way, around mid-day and in the evening, with wine and olive oil. Meat, animal products and fish are not allowed.

2. On the Feast of the Annunciation (March 25) and Palm Sunday fish is permitted as well as wine and oil, but meat and animal products are not allowed.

3. Wine and oil are permitted on the following days, if they fall on a weekday in the Second, Third, Fourth, Fifth or Sixth Weeks: First and Second Finding of the Head of St. John the Baptist (Feb. 24), Holy Forty Martyrs of Sebaste (Mar. 9), Forefeast of the Annunciation (Mar. 24), Synaxis of the Archangel Gabriel (Mar. 26), Holy Greatmartyr George (April 23), Holy Apostle and Evangelist Mark (April 25), as well as the Patronal Feast of a Church or Monastery.

It has always been held that these rules of fasting should be relaxed in the case of anyone elderly or in poor health. Personal facts also need to be taken into account, as, for example, the situation of an isolated Orthodox living in the same household as non-Orthodox, or one obliged to take meals in a factory or school lunchroom. In cases of uncertainty, however, one should always seek the advice of his or her spiritual father.

At all times, however, it is essential to bear in mind that you are not under law but under grace (Rom. 6:14), and that the letter kills, but the Spirit gives life (2 Cor. 3:6). The fasting rules, while they do need to be taken seriously, are not to be interpreted with the strict legalism of the Pharisees of Holy Scripture, for the kingdom of God is not food and drink, but righteousness and peace and joy in the Holy Spirit (Rom. 14:17).