Thoughts and how to confront them (3)

Thoughts and how to confront them (3) 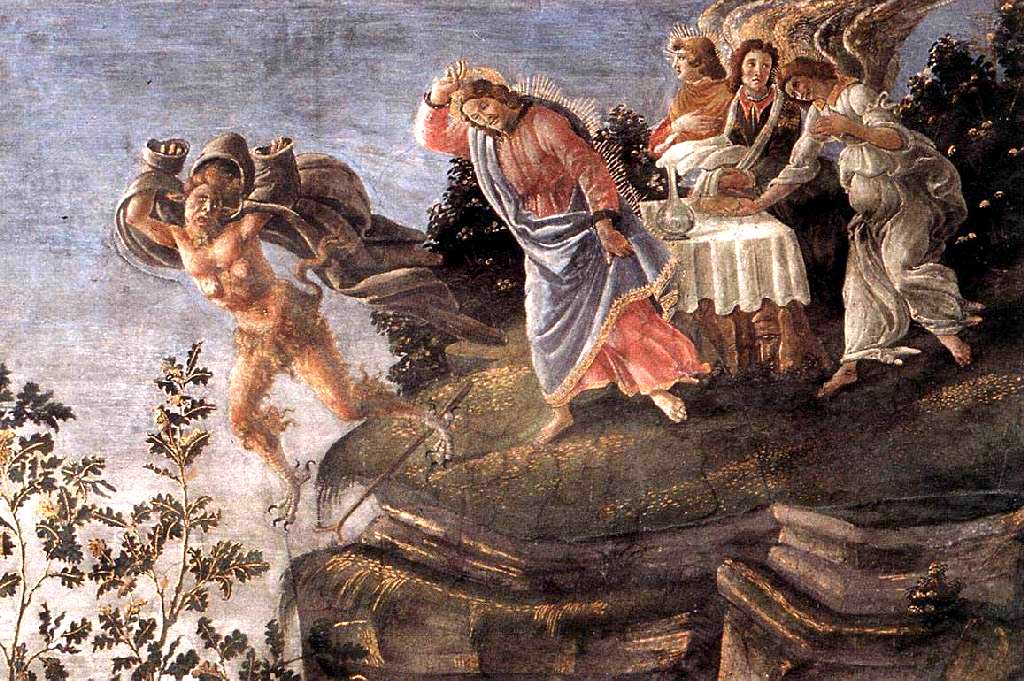 The Temptation of Christ. Fresco of Boticelli in Capella Sistina, Vatican 1481-5

In following, they attempt to infect the holy moments, such as those of prayer, and the Holy Eucharist, or by inplanting in our minds thoughts of blasphemy against God.

Thus, this vile and impure being adores the moments of Holy Gatherings and especially the dreadful moments of the Holy Sacraments (The Holy Eucharist) in order to blaspheme the Lord and the Sacred Feasts. That is, when the ceremony of The Holy Eucharist takes place, Satan comes and implants in us various blasphemous thoughts. Thoughts such as: «The Holy Eucharist is not The Holy Body and Blood of Christ», and that «that which we go to receive in us is absolutely nothing»! Worthless! There are even more impure and wretchedly vile thoughts which one dares not mention.

St. John of Mount Sinai mentions that a monk was fighting a war against such thoughts for fourteen whole years. There is no other thought as difficult to withdraw and cast out as that of the thought of blasphemy, which may lead a person to despair.

This is a war in which the Abbot Pamvo took part and, while he was praying to the Lord for assistance, heard a divine voice from above which said: «Pamvo, Pamvo, do not distress yourself with the sins of others, but tend to your own acts»

. These blasphemous and vile thoughts battled with many other formidable and virtuous men, such as Meletios the Confessor, as well as others who witnessed and died because of their faith in The Lord. Amongst those saints who confirm this is St. Peter of Alexandria and Pafnoutios the Confessor, who suffered persecution. St. Peter of Alexandria narrates that: «While I was admitting and confessing my faith in The Lord Jesus Christ in the court of law, where they were, by the use of various means, flogging, skinning and burning my body, the demon inside me was blaspheming God».

It is certain, as St. Nikodemus the Athonite points out, that these types of thoughts originate mainly due to the condemnation, the haughtiness, and the jealousy of the demons. For these reasons, the best weapons one may use against them are humility and self reproach.

The following are referred to in the writings of St. John of the Climacus, of Mount Sinai: «Let us take notice and we will observe that at the time when the church bells sound and we see our brethren gather into the Church, the invisible enemies also gather themselves there. Still others gather themselves at the time when we prepare to wake up to go to Church and do so in order to suggest to us that we should return to our sleep. They say, «…stay and rest until the introductory and preliminary hymns are completed and then you can go to Church’. Again, others, while we are deep in prayer, come to us in order to bring us drowsiness, others to bring hunger, others to suggest to us to lean on the wall as if we were tired, and others cause us to yawn». Others remind us of loan payments, contracts and bank accounts. So, it is, that in this manner, we leave the Church harmed instead of benefited, without having heard even the most fundamental parts of the Holy Liturgy. There are even many times while we are in prayer, that our mind becomes filled with improper and indecent thoughts. Yet, as the time the prayer finishes, every temptation suddenly disappears.

The devil is well-aware of the benefits which are borne from prayer. For this reason, he attempts to contaminate it.

Even if we are victorious over the demon, he installs in us the thoughts of pride and haughtiness through the use of other means, such as the fact that we have attained virtue, since, for example, all the cunning and tempting thoughts have been terminated.

This thought, that we are victorious, resembles a snake which is coiled and hidden in the dung heap of haughtiness. Cunning and tempting thoughts are hidden and nesting in the depths of our hearts!

There are demons who infect our soul at the moment we lay down to sleep and there are others who contaminate our very first thoughts when we wake up in the morning. The devil never loses the chance of fighting us.

There are times when he implants in us thoughts which are against our spiritual confessor and guide. In other occasions immediately after the confession of our sins, he reminds us of the sins we have just confessed in order to bring us to the point of despair. Yet other times, he even casts us into sin and, following that, installs in us the thought of teaching others to perform the same sin!

These, in general terms, are the thoughts which are created by the devil.

Let us now examine the thoughts which are created by man, himself.

The human mind is fond of creating havoc. That is, just as a dog goes to the butcher store in order to grab some piece of meat, or a food-lover is fond of continually speaking of food, the human mind resembles these examples. Many times, it feeds on improper and unclean notions.

The person who cannot control himself, that is a person who is a glutton, has his mind and thoughts continuously concerned about impure images. St. John of the Climacus gives us an example of this. Just as a dung heap gives rise to vermin, so does the multitude of food generate downfalls through the production of cunning thoughts and indecent dreams. Gluttony is for fornication the same as wood is for fire.

It is for this reason that St. John of Mount Sinai when writing in «The Climacus», after his dissertation concerning gluttony very wisely placed the topic of fornication.

«For, I believe», he states, «that gluttony is the mother of fornication».

So then, where do the thoughts of fornication originate? If a person enjoys a leisurely life with all the necessary comfort and, as a result, does not know how to endure hardships and has no knowledge of how to engage in spiritual exercises of ascetic nature, then it is very natural for this person to have thoughts of fornication which will eventually lead to the act. In other instances, again, when a person liberates senses in order to view some other person or to touch someone with his hand, or hear something indecent, it is as if at that moment, he has opened the door to impure thoughts. Of course, man’s nature is prone him to having such thoughts.

Even the disobedience to God’s covenants gives birth to a «warehouse of thoughts». That is, the human mind becomes a storage of cunning thoughts. The same types of thoughts are also created by disobeying our confessor and spiritual father.

Many times, human curiosity to explore God’s mysteries creates blasphemous thoughts, such as the thought that God is unjust and favors some persons over others. That to some He gives visions and miracles and yet to others He gives nothing!

There exist, however, thoughts which originate from man as well as the devil. These are the «combination thoughts».

» I have seen», says St. John of The Climacus, «a few men eating with delight and not being immediately attacked (by the impure thoughts). Also others, dining and keeping company with women and yet not having had any cunning thought pass through their mind at that moment in time. However, at the time when they thought that they were in their cell in a condition of peace and security, that is when they were suddenly overtaken by disaster. Nature is what pushed them to dining and drinking delightfully and viewing wantonly. Satan used the moment and cast them into sin».

These are, in general terms, the thoughts which originate from man as well as the devil.

Throughout all this battle, there exists a ladder; attack, combination, consent, captivity.

The enemy attacks the person with one simple thought or with one image. When that person accepts, then the consent takes place. Then begins the conversation with the thought. From this moment on begins the person’s own responsibility for thoughts or actions. Following, the person consents with delight in order to fulfill that which the thought suggests, and in the end he submits and is imprisoned by the passion.