The Holy Great-martyr Anastasia the Deliver from Bonds, and others with her

The Holy Great-martyr Anastasia the Deliver from Bonds, and others with her 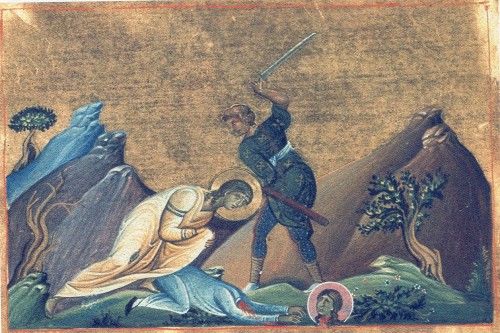 This glorious heroine of the Christian Faith was born in Rome into a wealthy senatorial family of a pagan father and a Christian mother. From her early youth, she clung in love to the Lord Jesus, guided in the teaching of Christ by a devout teacher, Chrysogonus. Anastasia was forced by her father to enter into marriage with a pagan landowner, Publius. Excusing herself on the basis of a female illness, she in no way wished to enter into physical relations with him. For this, her husband tortured her harshly by confinement and starvation. He inflicted even more tortures upon her when he learned of her secret visits to the prisons of the Christian martyrs: bringing them provisions, ministering to them, bathing their wounds and loosening their bonds. But by God’s providence she was freed from her wicked husband. Publius was sent to Persia by the emperor, and while sailing on the sea he was drowned. St. Anastasia then began to minister freely to the tortured Christian martyrs and to comfort the poor, giving them alms from her great inheritance. At one time the Emperor Diocletian was in the town of Aquileia and ordered that Chrysogonus, the confessor of Christ, be brought to him. St. Anastasia accompanied him on the way. Holy Chrysogonus was beheaded by order of the emperor, and then three sisters-Agape, Chionia and Irene-also suffered (April 16): the first two were cast into fire and the third was shot through with arrows. St. Anastasia took their bodies, wrapped them in white linen, anointed them with many aromatic spices, and honorably buried them. Following this, Anastasia went to Macedonia, where she helped the sufferers for Christ. There she became well known as a Christian, for which she was seized and brought before various judges for interrogation and torture. Desiring to die for her beloved Christ, Anastasia constantly longed for Him in her heart. A certain chief of the pagan priests, Ulpianus, lustfully tried to touch St. Anastasia’s body, but he was suddenly blinded and breathed his last. Condemned to death by starvation, St. Anastasia lingered in prison for thirty days without food, nourishing herself only on tears and prayer. Then she was placed in a boat with several other Christians to be drowned, but God delivered her even from this death. She was finally tied by the feet and hands to four wheels over a fire, and she gave up her holy soul to God. She suffered and took up her habitation in the Kingdom of Christ in the year 304.