Palm Sunday- the Entrance of Our Lord into Jerusalem

Palm Sunday- the Entrance of Our Lord into Jerusalem 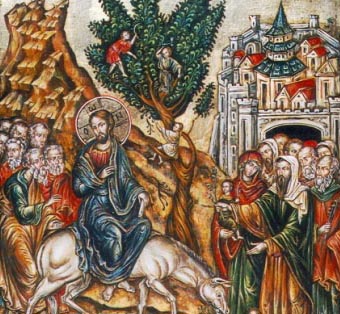 In the life of Jesus the solemn entrance in the Holy City was the only visible triumph. Up to that day, He consistently rejected all attempts to glorify Him. But six days before the Passover, He not only accepted to be glorified, He Himself provoked and arranged this glorification by doing what the prophet Zacharias announced: «behold, Thy King cometh unto thee… lowly and riding upon an ass.. «(Zac. 9:9). He made it clear the He wanted to be acclaimed and acknowledged as the Messiah, the King and the Redeemer of Israel.

The Gospel narratives stress all these Messianic features; the Palms, the cry from the crowd of “Hosannah”, the acclamation of Jesus as the Son of David and the King of Israel.

The history of Israel is now coming to its end. Such is the meaning of this event. The purpose of that history was to announce and to prepare the Kingdom of God, the advent of the Messiah. And now it is fulfilled. For the King enters His Holy City and in Him all prophecies, all expectations find their fulfillment. He inaugurates His Kingdom.

The Liturgy of Palm Sunday commemorates this event. With palm branches in our hands, we identify ourselves with the people of Jerusalem, together with them we greet the lowly King, singing Hosannah to Him. But what is the meaning of this today for us? First, it is our confession of Christ as our King and Lord. We forget so often that the Kingdom of God has already been inaugurated and that on the day of our Baptism we were made citizens of it and promised to put our loyalty to it above all other loyalties.

We must remember that for a few hours Christ was indeed King on earth in this world of ours, for a few hours only and in one city. But as in Lazarus we have recognised the image of each man, in this one city we acknowledge the mystical centre of the world and indeed of the whole of creation. For such is the biblical meaning of Jerusalem, the focal point of the whole history of salvation and redemption, the holy city of God’s advent. Therefore, the Kingdom inaugurated in Jerusalem is a universal Kingdom, embracing in its perspective all men and the totality of creation.

The entrance of Jesus into Jerusalem came at the end of the entire process of preparation revealed in the Bible: it was the end of all that God did for men. And thus this short hour of Christ’s earthly triumph acquires an eternal meaning. It introduces the reality of the Kingdom into our time, into all hours, it makes this Kingdom the meaning of time and its ultimate goal. The Kingdom was revealed in this world – from that hour – its presence judges and transforms human history. And at the most solemn moment of our liturgical celebration, when we receive from the priest a palm branch, we renew our oath to our King and confess His Kingdom as the ultimate meaning and content of our life. We confess that everything in our life and in the world belongs to Christ, nothing can be taken away from its sole real Owner, for there is no area of life in which He is not to rule, to save and to redeem. We proclaim the universal and total responsibility of the Church for human history and uphold her universal mission.

However, we know that the King whom the Jews acclaimed then, and whom we acclaim today, is on His way to Golgotha, to the Cross and to the grave, we know that this short triumph is but the prologue to His sacrifice.

The branches in our hands signify, therefore, our readiness and willingness to follow Him on this sacrificial way and our acceptance of sacrifice and self-denial as the only royal way to the Kingdom. And finally these branches, this celebration, proclaim our faith in the final victory of Christ. His Kingdom is yet hidden and the world ignores it. It lives as if the decisive event had not taken place, as if God had not died on the Cross and Man in Him was not raised from the dead. But we, Orthodox Christians, believe in the coming of the Kingdom in which God will be all in all and Christ the only King.