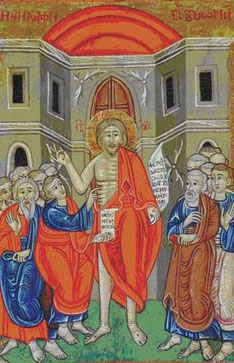 Nοbody knows the time or even the place that our Lord is coming again to judge the living and the dead. For this reason, the Fathers of our Church do not tell us to try and outsmart God, by predicting the time that He will appear. On the contrary the Fathers concentrate on teaching us to be constantly ready and watchful, by praying, fasting and doing works of love and faith. We are instructed to expect a sudden if not instant entry of our Lord.

In the final chapter of the Book of Revelations, the Apocalypse of Saint John we are informed that we must fully accept the imminent coming of our Lord Jesus Christ. Furthermore we are told that our world will suffer terribly before the DEUTERA PAROUSIA (SECOND COMING) of our Lord and that this world will be destroyed. Nevertheless so let it be, in obedience we should pray “Even so come, Lord Jesus [Christ]” (Rev 22:20) and come quickly.

In today’s gospel reading we were told of the pitiful sight of the Apostles who gathered in a small dark house for fear of the Jews after the death of their Lord Jesus. They had locked every window and door, and they were in a state of mourning. They must have been deeply depressed, angry, disillusioned, confused and very afraid to say the least.

Instead of waiting eagerly for the coming of their Lord, they probably feared that the world was about to end. Instead of standing well, standing with fear and trembling in expectation of their Lord, they were crouched down in complete darkness and gave way to their material fear for their lives. They perhaps were so horrified at what had happened to their Lord and master that they could not stand to go through the same torment and pain. They probably thought, ‘How was it possible for the corpse of Jesus to rise from the dead when they knew that His body was so mutilated, beaten and pierced with large nails and a spear in His side?’

The Gospel reading of today tells us, “When it was evening on that day, the first day of the week… Jesus came (to his disciples) and stood in the midst of them and said “Peace be with you”. After showing the disciples the nail marks on His hands and the gash in his side, again He said to them “Peace be with you”.

Then He started to commission them; this was the beginning of the Great Apostolic mission to the world. “As the Father sent me” he told them, “I also send you”. Jesus then told His Apostles, “Receive the Holy Spirit. If you forgive the sins of any, they are forgiven them; if you retain the sins of any, they are retained”. What a great thing happened that day, the power to forgive sins, the authority of judgement was given to the Apostles to pass on, from generation to generation, from Apostle to Apostle.

However, where was Thomas, the other Apostle, when all of this was happening? Unfortunately we do not know, perhaps by divine economy he was not there.

Nevertheless we do know that as soon as the other disciples saw Thomas they cried out, “We have seen the Lord!” Nevertheless, he was not so easily convinced and probably thought, ‘perhaps it was an illusion a ghost of some sort’. Thomas then said to his fellow disciples, “Unless I see the mark of the nails in His hands, and put my finger in the mark of the nails, and my hand in his side, I will not believe”.

Do not misjudge Thomas, for perhaps he remembered the words of his master Jesus Christ, Who once proclaimed, “If anyone says to you, ‘Look, here is the Christ!’ or, ‘There He is!’ do not believe it. For false Christs and false prophets will appear and perform great signs and miracles to deceive even the elect–if that were possible. See, I have told you ahead of time”.

“So if anyone tells you, ‘There He is, out in the desert’, do not go out; or, ‘Here He is, in the inner rooms’, do not believe it. For just as lightning that comes from the east is visible even in the west, this is also how the coming of the Son of Man will be” (Matt 24:23-27).

So Thomas probably did not wish to believe until he had substantial proof, in order to keep the word of his master.

Within eight days however, Jesus appeared to the disciples again just as suddenly as He did the last time, but this time Thomas was present.

Although the doors were all shut and there was no possibility of entry, Jesus appeared to them again, from nowhere, and stood amongst them. Thomas most probably thought ‘surely He must be a ghost, a vision, a false Christ’. Jesus then spoke “Peace be with you” and He said to Thomas, “Put your finger here and see my hands. Reach out your hand and put it in my side. Do not doubt but believe”. And Thomas answered with such assurance and conviction, “My Lord and my God!” The Holy Tradition of the Church tells us that Thomas did not touch our Lord, nor did he ever contemplate on doing so after seeing Him, because he quickly realised that it is not only the human senses which are required to discern the Truth but rather, (more importantly) the divine senses of the heart.

Yet Jesus said to him, “You have believed because you have seen me. Blessed are those who have not seen and yet have come to believe” (Jn 21:29). So brethren truly we are blessed if we have not seen and yet we do believe. Have you noticed how many gather together throughout the world and cry out and proclaim every Pascha (Easter) “Christ is Risen!” and “Truly He is Risen!”

Dear brethren, the scepticism of the Apostles and especially that of Thomas is not detrimental; it is in fact very beneficial, if not vital, for the whole of Christianity. Sound discretion and good judgement are vital for spiritual matters, and the resurrection event of our Lord is no exception.

In the secular world Thomas is known as “Doubting Thomas”, but in the Orthodox Church he is known as Believing Thomas.

For this reason the Apostles had to be 100% sure that Jesus rose from the dead in order to proclaim the FULL TRUTH, which is WITHOUT DOUBT so that we may believe without that “Jesus is the Messiah, the Son of God, and that through believing [we] may have life in His name”. So that we may be blessed, by having a faith which comes from the heart, the soul — and not purely from our human senses.

May the grace of our Lord Jesus Christ be with us all. Amen