An incredible miracle in Serbia (part 4)

An incredible miracle in Serbia (part 4) 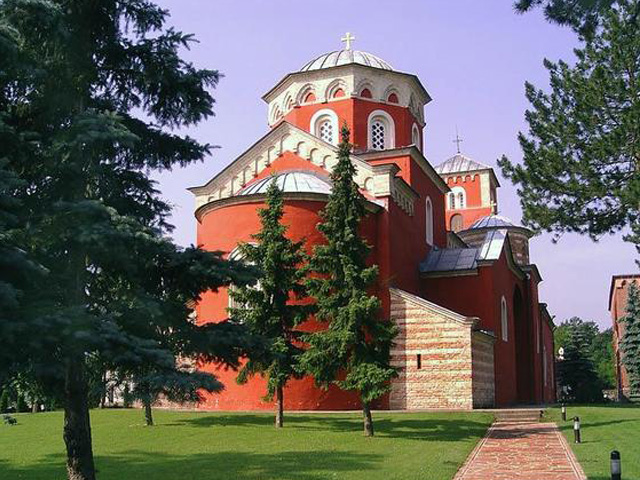 I took them to the Zitsa monastery but they suddenly disappear

As soon as we reached the bridge in front of the monastery, the monk talked to me some more.

“Dussan, what has happened to you today and what will happen during the day, you must not tell anyone unless three months pass. Then you can talk about it only with relatives and friends!”

I replied shortly: “Ok!” and I looked again in the rear mirror to see if I can make a turn into Zitsa’s front door. This time I also saw the halos on their heads. My psychological state was already disturbed with all these events. I was feeling, however, the insatiable need to distance myself from these strange passengers, as soon as possible.

At the parking lot in front of the monastery there were some cars and a large group of tourists who had been curious about the monastery and its surrounds. I drove the car to the front of the monastery’s outside wall, so that I could open them the door to leave.  But they didn’t show any mercy to me this time either. When I turned my head, there was absolutely no one in the car.

I started trembling again in fear. I looked at the opened door and then at the door which was still locked. I could not believe my eyes. I looked again a few more times very carefully, but still there was no one inside or outside of the car.

Disbelief and fear tore my heart both at once with an immense force. The uncertainty about me took hold beyond bounds. I was scared that I had lost my marbles. To deny any credibility towards this thought, I started biting my hands, pulling my hair and beating my face without restraint.

During my ordeal, a lot o people gathered around me. In my distress I heard them asking me what had happened, why am I biting myself and beating myself up.  My situation was depressing. I was trembling as if I had fever. But I replied:  “People, get away from me!”

I removed myself from their midst and walked a little further away so that I could concentrate and gather my wits about me. I remain locked up in my room but also inside my penance. In my destitute I looked at the clock. It was 11.30 in the morning. I began remembering every single word my fellow travelers had told me from the moment I had picked them up, until the point they had suddenly disappeared.

What had bothered me most were their last words: No to tell anyone anything for the next three months for what had happened and for what was going to happen during the course of that day. Severely moved and upset I started talking to myself loudly.

“ My Lord, what can happen to me? I will go to the hot springs, I will not take lunch, I will lie down to rest. What could happen to me?” I was repeating to myself: “Am I going to die?” But then I thought, if I die I will not be able to described the events that took place , since as the monk told me, I will describe everything after three months.

This last reasoning consoled me a little and felt a bit funny for fearing death a few minutes ago. However, at the time I was not able to comprehend or explain anything that happened. After a short rest, I continued my trip from Zitsa towards the springs, but even today I cannot explain how I was able to drive the state I was in.

Fortunately, I arrived at the springs without further incidents but I was totally confused and knackered with some kind of an unbearable fatigue. It was just a few minutes before noon when I passed by the hotel named Zitsa, and saw the tourists going for lunch. I was not feeling hungry, even though it was lunch time. I picked up my things and went into my room to lie down and recollect the events with more detail. I lied in bed fully clothed, something which was very unusual for me.

I suddenly felt something pressing the middle of my chest, something like a strong and deep jab in the heart. Soon after I fell into a stupor and slept heavily. ..