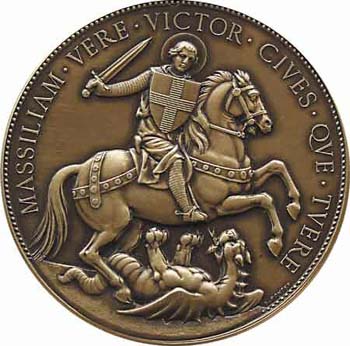 Seal from the Abbey of St. Victor in Marseille in homage of its patron saint fighting idolatry

Victor, a Catholic officer of the Roman army known for his noble lineage, military valor, and intelligence skills, served in the garrison of Marseille around the year 290. He developed a strong apostolate with his fellow men of arms and the people of the city, stimulating them all to courageously face the persecution of those times.

His activity was discovered by enemies of the Faith and Victor was denounced to the Emperor. He was brought before two prefects in the city, who, because of his distinction, sent him to the Emperor himself. The tyrant imposed cruel torments on him in an attempt to make him deny the Catholic Faith. All those tortures were futile because Victor remained faithful. After being tortured, he was thrown in a prison, and there he converted the three soldiers who were guarding him. When the Emperor heard this, he ordered that Victor be taken to a pagan temple to burn incense to the false idol Jupiter. Victor went up to the altar and kicked the statue to the ground.

Indignant, the Emperor order that Victor’s foot be chopped off and then his body crushed by a millstone. When the mill broke down, he ordered Victor beheaded. In the cave where his remains were conserved, many miracles took place. His relics were kept for centuries in the Abbey of Saint Victor in Marseille. The French Revolution tried to destroy them, but they were preserved and today are in the Church of St. Nicolas of Chardonnay in Paris.