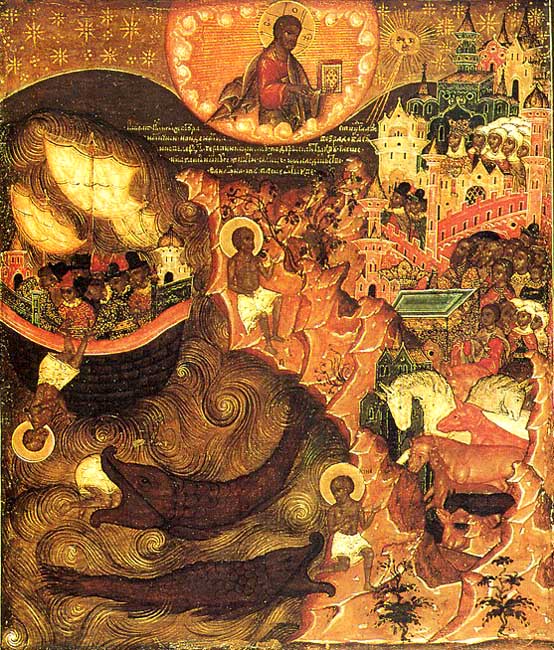 GOD sent the prophet Jonah to preach to the people who lived in Nineveh in Assyria. They were enemies of the Israelites. Jonah did not want to go to Nineveh because he feared that if the Assyrians were converted, they might harm his people. Instead, he set out by boat for a far country. In this way he thought he could hide from God.

But God sent a violent storm upon the sea. «Throw me overboard,» said Jonah to the sailors, «for I know that the storm has come because of me.» So, praying to God for mercy, they threw Jonah into the sea. And the wind stopped,

Then a great fish; sent by the Lord, swallowed Jonah. He was three days and three nights inside the fish. There Jonah prayed, «When any soul fainted, I remembered the Lord, Now I will offer my sacrifice. I will pay what I owe to the Lord.

For God is my deliverer.» At last, the fish threw Jonah out upon the shore.

God again ordered Jonah to go to Nineveh. This time he obeyed. He went through the streets of the city, crying, «Yet forty days, and Nineveh shall be destroyed.»

When the king and the people heard this, they were in great fear. The king ordered everyone in the city to do penance for his sins. Even the king did penance that God might forgive Nineveh.. God saw that the people were sincere, and in His mercy He spared the city.

Jonah feared that he might be looked upon as a false prophet. He built a hut outside the city and waited there to see what would happen.

God caused an ivy to grow and shelter Jonah from the hot sun. For this Jonah was grateful. The next morning, God caused the ivy to wither. The sun beat down with such heat on Jonah that he cried, «It is better for me to die than to live.»

God then said to him, «You are sorry for the ivy, although you were not the one to make it grow. Shall I not, therefore, spare Nineveh, which has more than one hundred twenty thousand people?»

The story of Jonah shows God’s interest; not only in Israel but in all mankind. It teaches that men must do penance for their sins. It also tells how God made use of His prophets, even when they did not want to carry out His messages.