The Martyrdom of the Holy Hieromartyr Eleftherios and His Mother Anthia

The Martyrdom of the Holy Hieromartyr Eleftherios and His Mother Anthia 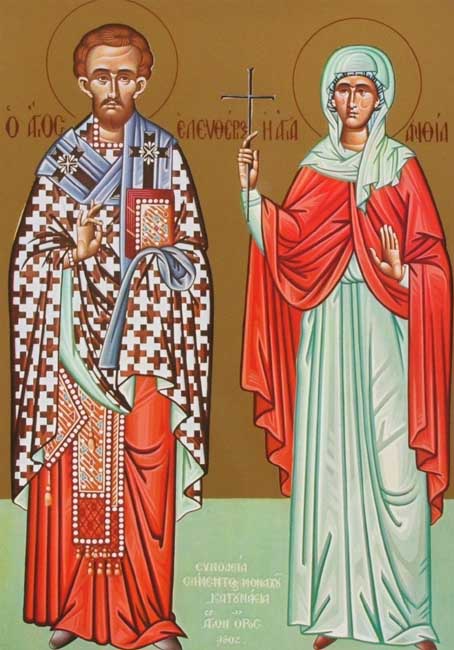 During the reign of Aelius Hadrian, Roman Emperor and zealous servant of the idols, the wondrous Eleftherios was born the son of wealthy, renowned parents in the city of Rome. His father thrice held the rank of proconsul, and his mother was even more estimable, for instructed by Saint Paul, she believed in Christ and was baptized by the hand of the Apostle, taking the name of Evanthia [noble], and reared her son in piety. Read more…

When Eleftherios attained a suitable age, she dedicated him to the Lord’s service, entrusting him to Anicetus, Bishop of Rome. Seeing that the youth’s conduct was exemplary, the hierarch enrolled him among the clergy, making Eleftherios a Deacon at the age of fifteen. At eighteen, Eleftherios was ordained presbyter, and he became Bishop f Illyricum when he was twenty. He shed the light of Christ’s word, illumining many and leading them to the knowledge of the one God. Unable to endure this, the envious devil, uttering murderous threats against the Church, resolved to bring about the saint’s destruction, and incited the ungodly Hadrian to wage war against the truth and to persecute Christians. First of all the Emperor singled out Eleftherios, it being his intention to do away with the foremost teachers of piety. He sent an officer named Felix who was converted upon hearing the Bishop preach to his flock; but Eleftherios convinced him that they should go to the Emperor as he was commanded, which they then did. 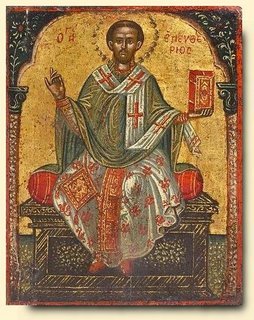 When the holy Bishop was taken before the Emperor Hadrian, the Emperor asked him, “Why, Eleftherios, have you abandoned our ancestral faith, shown disdain for the gods and devoted yourself to the adoration of a new Deity, Who suffered the cruelest of deaths?” Wishing to emulate Christ, Who at His Passion remained silent before Pilate and Herod, Eleftherios intended to make no reply, but the Emperor demanded, “Answer!” He replied to the Emperor, “How can you expect me to worship gods such as yours? I should rather counsel you to forsake them, but since you will not heed me, it is only left for me to weep for you. Although honored by God with the gift of reason, you have abased yourself lower than the wood and stone which you worship, having forsaken the true Lord Who wisely created everything that exists. For me to die for Christ is delight and joy” At these words the Emperor was filled with anger and commanded that burning coals be placed under a brass bed. On this couch the martyr was to be stretched out and burned to death. As soon as the bed was ready, Eleftherios lay upon it. God looked down from above and eased the martyr’s suffering. Hadrian having satisfied his wrath a little, ordered the saint removed from the bed. The emperor thought that Eleftherios was dead, but the martyr rose completely unharmed, and after praying, declared, “O Emperor, marvel at the man you thought was dead; confess Christ, Who I preach, to be God and acknowledge the weakness of your pitiful deities!” 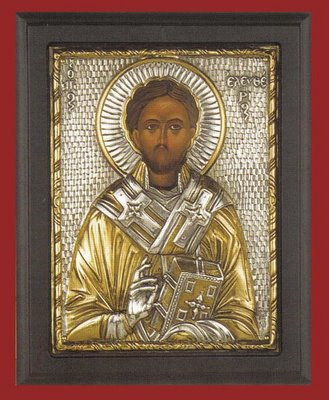 Having bested the Emperor in their first encounter, Eleftherios was subjected to further tortures, including roasting over an iron grill with a fire fueled by oil beneath it; but the Lord’s favorite remained completely unharmed. He was placed in a pan filled with wax, pitch, and tallow with boiling contents. The martyr only replied by calling the Emperor an Arabian wolf which consumed Christ’s sheep; and the fire was immediately quenched and a cool breeze refreshed the brave sufferer. A brass oven was heated, one studded with sharp spikes by the Emperor’s Prefect, but seeing and hearing the holy martyr’s firm faith before this torture, the Prefect chastened the Emperor: “Why do you subject an innocent man to torments only the worst criminals should suffer?” Whereupon the Emperor had the Prefect cast into the oven. Eleftherios made the sign of the cross over the Prefect, who was thrown into the furnace and he remained unharmed. Hadrian had him beheaded. Then the Emperor had the Bishop cast into the oven; but again the fire was extinguished and oven grew cold, while the spikes were bent over, as if doing reverence to the martyr. The martyr was tied to wild horses, but an angel of the Lord loosed his bonds and led him off to an uninhabited mountain, where he lived for a time peacefully. But soldiers were sent for him there, and he was given to wild animals to destroy him; but they fawned over him. Finally he was beheaded and his mother, Evanthia, throwing herself on his body was also beheaded. Their sacred relics were buried by the faithful.

Holy Hieromartyr Eleftherios, pray unto God for us!