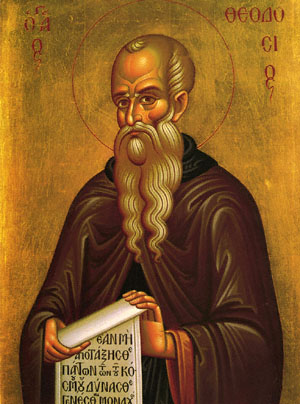 He lived during the fifth-sixth centuries, and was the founder of cenobitic monasticism. He was born in Cappadocia of pious parents. Endowed with a splendid voice, he zealously toiled at church reading and singing. St. Theodosios prayed fervently that the Lord would guide him on the way to salvation. In his early years he visited the Holy Land and met with St. Symeon the Stylite, who blessed him and predicted future pastoral service for him.

Yearning for the solitary life, Saint Theodosios settled in Palestine into a desolate cave, in which, according to Tradition, the three Magi had spent the night, having come to worship the Savior after His Nativity. He lived there for thirty years in great abstinence and unceasing prayer. People flocked to the ascetic, wishing to live under his guidance. When the cave could no longer hold all the monks, St. Theodosios prayed that the Lord Himself would indicate a place for the monks. Taking a censer with cold charcoal and incense, the monk started walking into the desert.

At a certain spot the charcoal ignited by itself and the incense smoke began to rise. Here the monk established the first cenobitic monastery, or Lavra (meaning «broad» or populous»). Soon the Lavra of St. Theodosios became reknowned, and up to 700 monks gathered at it. According to the final testament of St. Theodosios, the Lavra rendered service to neighbor, giving aid to the poor and providing shelter for wanderers.

St. Theodosios was extremely compassionate. Once, when there was a famine in Palestine and a multitude of people gathered at the monastery, the monk gave orders to allow everyone into the monastery enclosure. His disciples were annoyed, knowing that the monastery did not have the means to feed all those who had come. But when they went into the bakery, they saw that through the prayers of the abba, it was filled with bread. This miracle was repeated every time St. Theodosios wanted to help the destitute.

At the monastery St. Theodosios built an home for taking in strangers, separate infirmaries for monks and laymen, and also a shelter for the dying. Seeing that people from various lands gathered at the Lavra, the saint arranged for services in the various languages: Greek, Georgian and Armenian. All gathered to receive the Holy Mysteries in the large church, where divine services were chanted in Greek. 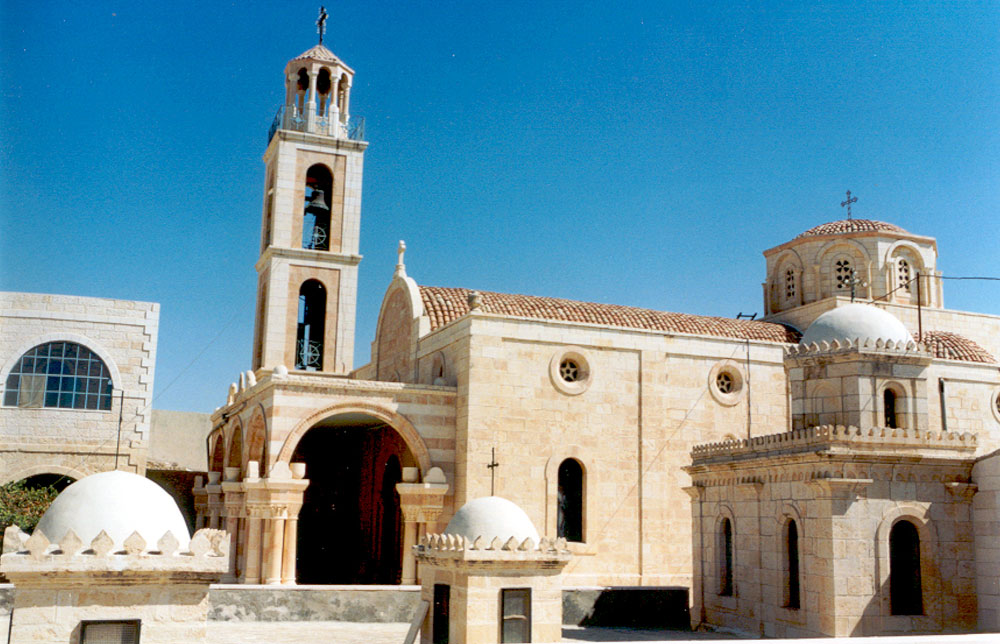 During the reign of the Byzantine Emperor Anastasios (491-518) there arose the heresy of Eutychios and Severus, which recognized neither the sacraments nor the clergy. The emperor accepted the false teaching, and the Orthodox began to suffer persecution. St. Theodosios stood firmly in defense of Orthodoxy and wrote a letter to the emperor on behalf of the monks, in which they denounced him and refuted the heresy with the teachings of the Ecumenical Councils. He affirmed moreover, that the desert-dwellers and monks would firmly support the Orthodox teaching. The emperor showed restraint for a short while, but then he renewed his persecution of the Orthodox. The holy Elder then showed great zeal for the truth. Leaving the monastery, he came to Jerusalem and in the church, he stood at the high place and cried out for all to hear: «Whoever does not honor the four Ecumenical Councils, let him be anathema!» For this bold deed the monk was sent to prison, but soon returned after the death of the emperor.

St. Theodosios accomplished many healings and other miracles during his life, coming to the aid of the needy. Through his prayers he once destroyed the locusts devastating the fields in Palestine. Also by his intercession, soldiers were saved from death, and he also saved those perishing in shipwrecks and those lost in the desert.

Once, the saint gave orders to strike the semandron (a piece of wood hit with a mallet), so that the brethren would gather at prayer. He told them, «The wrath of God draws near the East.» After several days it became known that a strong earthquake had destroyed the city of Antioch at the very hour when the saint had summoned the brethren to prayer.

Before his death, St. Theodosios summoned to him three beloved bishops and revealed to them that he would soon depart to the Lord. After three days, he died at the age of 105. The saint’s body was buried with reverence in the cave in which he lived at the beginning of his ascetic deeds.»