The Monks of the Arizona Desert

The Monks of the Arizona Desert 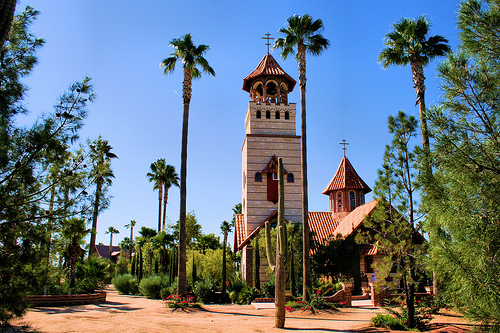 They surrender their lives to the “Geronta” or “Elder” or “Starets” trusting him to lead them to perfection and sanctification-”theosis”.

They always gaze toward the Cross of Christ seeking the strength and consolation of the Crucified and Risen Lord.

Through Prayer, Obedience and Humility they become “like Christ”. They crucify their flesh and their will so that they may transform themselves from fallen human beings to “transfigured children of God”.

As our two small buses rolled through the arid desert, my mind wondered “where on earth have they come to live?” Then, the oasis appeared suddenly ahead of us transforming the “coldness” of the land to a warm and welcoming embrace; I felt the heartbeat of the monastic prayer rising around me “Lord Jesus Christ, Son of God, have mercy on me a sinner,” and my heart was filled with joy of anticipation: What couldn’t come from five days in an Athonite-style monastery in the desert of Arizona? How will this experience affect us individually and as a group?

The buses drove into the dusty parking lot surrounded by ancient cactuses and “jumping joys” and stopped in front of the arched gateway that leads to the courtyard of the monastic settlement.

The group members quickly disembarked from the two buses and carried their luggage to the covered kiosk.

Sighing with relief (mission accomplished!), I deposited my things on the bench and took out my camera. The byzantine style church rising humbly into the crystal clear blue sky, while hiding shyly behind a mixture of desert and tropical trees and beautiful flowers, the black-clad monks coming up politely to offer us water and “loukoumi”, and the women of our group unrecognizable behind their head scarfs and long dresses, provided the backdrop of the setting that we were to become accustomed to for the next five days.

This was different, very different from whatever I had experienced in my last thirty years of traveling to monasteries. It was bound to be a unique experience.

A tall monk from Russia, in his early thirties (speaking fluent Greek)) showed us to our rooms. The women had to walk all the way to the outskirts of the desert settlement to two brand-new buildings where they shared rooms together. The men were led to the nearby guest house and I was taken to the “Episcopal residence”-a spacious apartment where the priests would stay in rooms with two beds each; the bishop’s section (where metropolitan Gerasimos of San Francisco stays when he visits here) was locked. The spacious kitchen and living-room soon became a gathering place for the visiting priests. As I entered the apartment I was greeted by Fr. Photios from the Pittsburgh Metropolis, a retired priest who was here since Saturday, waiting to see Fr. Ephraim, the Geronda. He offered to show me around and helped me get oriented.

At 3:30 pm the sound of the wooden “symandron” filled the air with its hoarse sounds; it was time for Vespers. I put on my Exorason and Kalimafki and headed for the “katholikon”.

The church was already crowded with pilgrims. Our group members quickly disappeared in the crowd. I took my seat next to Fr. Photios at the front left side where the guest-priests stand. The service of the ninth hour finished and the priest on duty moved from the back of the church to the royal gate; the Vespers began. I looked around searching for my wife’s god-son who lives here in this monastery as a monk, Fr. Vasilios. He was received into the Orthodox Church in Orlando and my wife became his sponsor some twenty five years ago. He later followed the route to Mount Athos, where he became an Orthodox monk. After several years on the Holy Mountain, Fr. Vasilios was asked by Geron Ephraim to return to the U.S. to serve in the newly founded monasteries here. He reluctantly obeyed.

Tonight, there he was at the left chanter’s stand singing the “Kekragaria”. His proficiency in Greek surprised me even more than his ability to chant in the Byzantine mode. He stands out as the first African American to serve on Mount Athos for so many years. His life is a testimony of the yearning of the human heart for the higher existence. I had not seen him in seventeen years, so a sense of joy filled my heart tonight. There he was, worshiping, singing and living in this ascetic setting.

At the conclusion of the Vespers, the monks sang the Paraklesis Service of St. John Chrysostom – today was the celebration of his memory (November 13).

We exited the church heading for the “Trapeza” (the Dining Hall). The priests sat on a table next to the abbot’s, the monks along the wall on one side, the men in the middle tables and the women along the wall on the other side. Prayers were offered and the meal began. A monk from the “amvon” of the refectory read aloud in a monotone voice about the life of St. John Chrysostom. We all ate quietly and waited for the abbot to ring the bell so that we can pour water in out stainless-steel cups to quench our thirsts. The food was plain (Monday is a fasting day for the monks), but it tasted so good-it always does in monasteries. I remember, we discussed this several times with George and Ted during my last trip to Mount Athos with them in 2004; there is no other explanation, we concluded, the prayers of the monks who prepare this food must be the reason why it tastes so good. Most of us would not eat this way at home and yet the food here tasted as if it was the best on earth. The bread, especially – four different kinds of it – fresh out of the oven, was unbelievably tasty.

Soon, the abbot rang the bell and we all stood for thanksgiving prayers. The monk who read throughout the meal descended from the amvon and headed to the abbot. After he received a blessing and a piece of bread the dinner was concluded with the “special prayer after a meal” and the abbot walked to the entrance of the “trapeza”, raised his right hand in the mode of blessing and blessed us all as we exited, first the priests, then the monks, the men and finally the women. After everyone came out, we followed the abbot back to the church for the reading of the Small Compline, followed by the Akathist Hymn to the Theotokos. Evening services were over at about 6:15 pm and “lights out” would be at 8:00 pm.

We regrouped to evaluate our first experiences; a feeling of awkwardness hang over us. For most of the members of the group this was the first exposure to a monastic setting. The black attire of the monks, their long beards, their covered heads, the fast reading in church (all in Greek), but above all the distance the monks placed between them and us made most of us uncomfortable (I was later told by one of the monks that only few of them have permission to speak with the guests). One of the members of the group expressed that this awkwardness was almost a kind of fear of the monks. They were different. They were unusual. They were from a different world. I pointed out that this was a natural reaction. We were coming from a different world. This was a culture shock for us. Let’s give ourselves time to adjust.

We closed our meeting and headed for bed. I was exhausted. I arrived at the “Episcopal residence” to discover that I had a roommate, Fr. Theodoros. We quickly found out that our paths had crossed at the seminary during my last year at Holy Cross, when he joined the program himself. I felt like I knew him for ever. He expressed that same feeling too.

The “symandron” rang at 1:50 am,. In a matter of minutes we were in church. The Midnight service had already begun. I took my seat with the guest-priests as the monks moved into place, their dark silhouettes moving about quickly in the dimly lit church as they venerated the icons and took their seats on either side at the front of the church. The Fisrt Hour was followed by the Third Hour and then we entered the Orthros. The order of the services is a bit different at the monasteries; they follow the Typicon of St. Savvas. In the parishes we follow the Cathedral Typicon. The monasteries read extra Psalms, sing the Canon of the Feast and do the services of the Hours. The Sixth Hour followed the Orthros and then we entered the Divine Liturgy. This was the Feast of St. John Chrysostom and the services were richer in content as the great father of the Church was honored today.

All the monks lined up for Holy Communion. They have Liturgies every day, but they usually receive Holy Communion on Tuesdays, Thursdays and Saturdays after they had fasted strictly on the previous days (Monday, Wednesday and Friday). Fasting is a constant askesis for them. They never eat meat and their diet is mostly vegetables, beans, olives and salads. Eggs and cheese are consumed on days of no fasting and fish or shell-fish on days of celebration.

I had asked our group not to go for Holy Communion today. We wanted to immerse ourselves in prayer and the monastic life for a couple of days, have Confession on Wednesday and then receive on Thursday. That would make Holy Communion more meaningful and raise our experience to a higher spiritual level.

Breakfast was available for us at about 5:30 am as we exited the Divine Liturgy. Eggs, cheese and milk were served, but the monks were not there. They have only two meals a day. By six o’clock we were finished. It was still dark outside and the stars shown brighter than I had seen in a long time. The group members agreed to meet at 10:30 am for a tour of the monastic settlement. We then headed back to bed to catch up on our missed sleep. There was a lot more to see and experience, but it all could wait.

Our rendezvous was at the kiosk by the main entrance. The women were all there, but the men had gone to the kitchen to help set up for lunch. The monks had asked them to lend a hand. The dining room had to be ready by 12:30 pm for over 150 people. The monastery was at full capacity. A bus of 55 Arab speaking Palestinian Christians from California had arrived late last night. Men, women and children accompanied by two priests, father and son, were here to stay for two nights. The monks have to feed everyone, prepare our beds, wash the sheets and towels, clean the rooms and also take care of the gardens. Some of them were working at the construction site of a new chapel on a nearby hill dedicated to prophet Elias.

The meal at lunch was delicious; baked salmon, potatoes, fresh bread and salad. This was a feast!

The group met after lunch to tour the campus. The men now had a different perspective than last night. The fear of the monks was gone. “They are cool guys, they are our friends,” one of them explained. “After working side by side with them and getting to talk to them, I feel very different.” The fear has been replaced by the warm feeling of friendship. The monastic setting is having an effect on hearts and minds. I am certain we will leave here deeply changed by the experience.