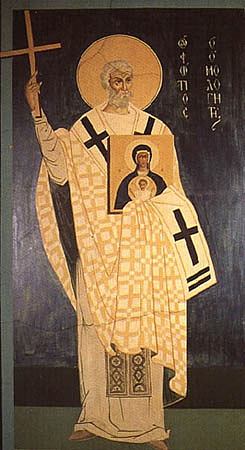 St Photios, along with St Mark of Ephesus and St Gregory Palamas, is counted as one of the Three Pillars of Orthodoxy, who stood against Latinizing influences on the Orthodox Church.

He was born in Constantinople in 810, son of pious parents belonging to one of the prominent families of the City. Both his parents were martyred during the Iconoclast persecution, leaving their son an example of adherence to the True Faith even unto death. He received a superb education, and was widely considered the single most learned person of his time. He was elevated to the Patriarchal throne in 858, after being raised through all the degrees of the priesthood in six days.

Throughout his Patriarchal reign he was troubled by the usual political battles and intrigues and, more importantly, by various threats to the Faith in the form of Manicheans and Iconoclasts.

Photios showed a special concern for the spread of the Gospel of Jesus Christ throughout the world: it was he who commissioned Sts Cyril and Methodius to embark on their mission to the Slavs.

Most memorably, it was the Patriarch’s lot to stand against the arrogant, uncanonical and heretical claims of Pope Nicholas I of Rome, who openly asserted for the first time the Pope’s pretensions to universal jurisdiction over the Church. When the Patriarch opposed these claims, Pope Nicholas summoned a council of western bishops, which “deposed” Photios and excommunicated all clergy whom he had ordained. In 867 the Emperor Michael III was assassinated, and his successor Basil I deposed Photios, had him imprisoned, and reinstated his predecessor Ignatius. To gain legitimacy for this widely-opposed move, he submitted it to the Pope for approval. Delighted, the Pope ratified the Emperor’s decision and used it to advance the claims of the Papacy. When the eastern bishops realized what was happening they prevailed on the Emperor to release Photios from his three-year imprisonment; and when Ignatius died, the Church unanimously returned Photios to the Patriarchal throne. A Council in Constantinople in 879-880, at which Photios presided, restored communion between the Eastern and Western Churches but at the same time anathematized the heretical addition of the filioque to the Creed, which the Papacy had been promoting.

When Leo VI succeeded Basil I as Emperor, the Patriarch was once again deposed, and was imprisoned in the Monastery of the Armenians for five years. During this time he wrote the Mystagogy of the Holy Spirit, a learned and eloquent refutation of the filioque heresy. The Saint, still imprisoned, reposed in peace in 893.