My trip to the Holy and Great Monastery of Vatopedi

My trip to the Holy and Great Monastery of Vatopedi 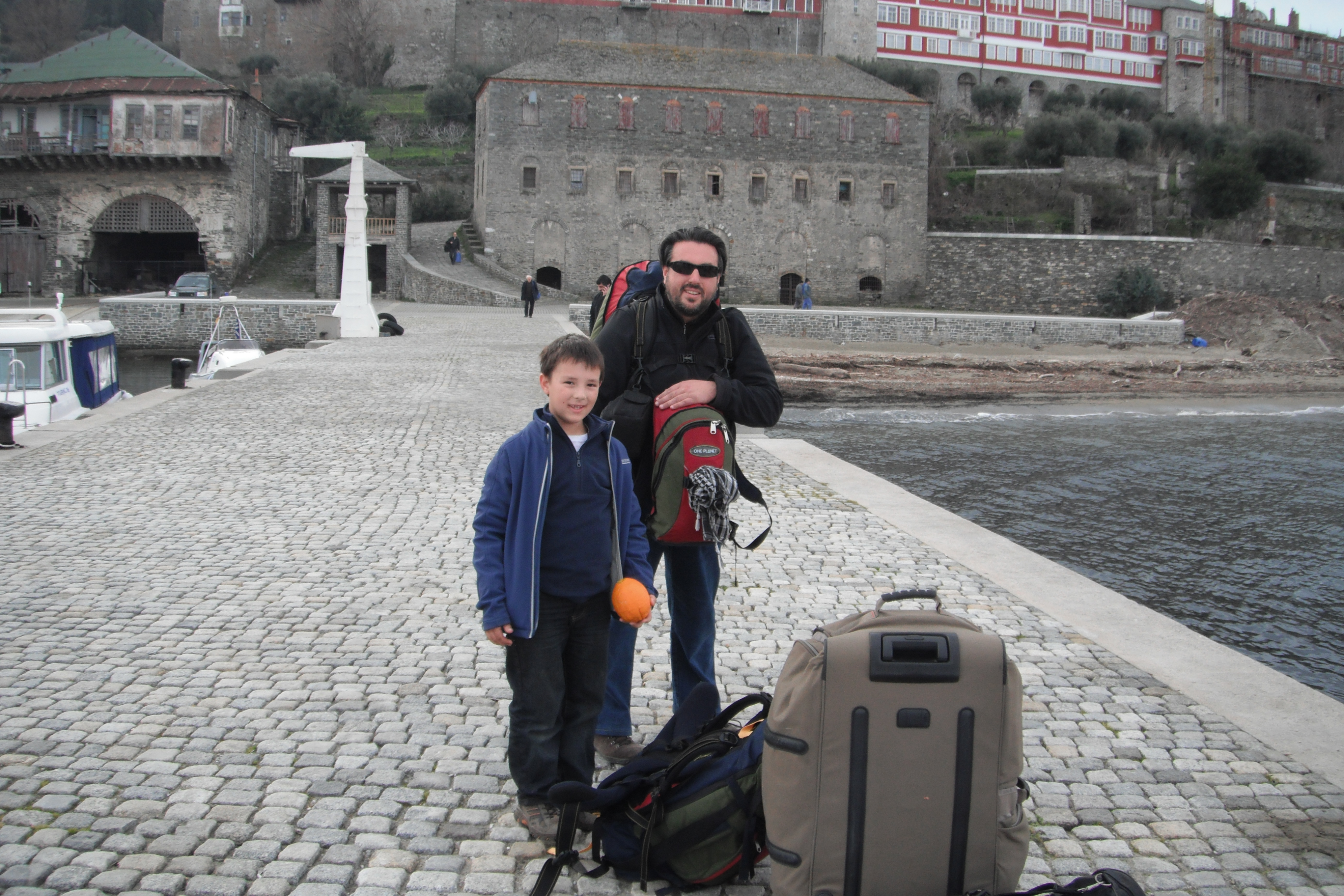 There is a place on earth called the “garden of the Virgin-Mary”, in no other than in Greece. Holy Tradition states that this place was visited by the Virgin Mary and she was mesmerized by its beauty, she asked her Lord and son, our sweet Jesus to dedicate this place to her, and dedicated to her it is!!! This garden is called the Athonite Peninsula, with twenty Holy Monasteries, and dozens of Sketes and hundreds of Kellia and thousands of monks. The monks are her little flowers, from every corner of the world.

No doubt since our Virgin has a “garden”, it goes without saying that she has a “home” in that garden and that home I believe is no other than the Holy and Great Monastery of Vatopedi. Vatopedi is blessed with seven miracle working icons of the Theotokos, and hundreds of relics of saints. Vatopedi is guided by no other than Abbot Ephraim, the true and trusted disciple of the Saintly Elder Joseph from Cyprus of the spiritual lineage of the Saintly Elder Joseph the Hesyhast and Cave-dweller. These fathers need no introduction, least of all by myself from far away Melbourne, Australia.

There are many words I can use to describe Vatopedi, all of them focus on Christian virtues; but one word stands out above all, LOVE. Our sweet Lord Jesus says clearly in John 13:35 “by this all will know that you are My disciples, if you have love for one another”. And Love, the monks aim to perfect, love for God, love for the Holy Theotokos our sweetest Panagia, love for the Abbot, love for one another, the pilgrims, and all the people in the world. To “love thy neighbor” they practice in its truest form. A level of love that we are seldom blessed with.

I have visited Vatopedi now five times, the first being in 2004. The last two times I visited Vatopedi I took with me my son Panagioti, who is 9 years old. Panagioti loves the monastery, and in his own words “geronda is the best”. We spent 16 days, 16 glorious days. No doubt the highlights for me were seeing Elder Ephraim and taking part in the church vigils. We had the special blessing of attending the all-night vigils of “Panagia Paramathia” and Saint Ephraim the Syrian, the Elder’s patron saint. These vigils made a spiritual impression. The chanting of the Vatopedini fathers is par excellence. The monks sang praises to God with such grace and love that at times I wondered if angels are chanting. Yes, truly the monks chant like angels. If a nine year old can stay focused in church for hours on end, that credit I give to the priests and monks who performed the services with such grace.

After the morning Liturgy we had trabeza, and Panagioti who has many serious allergies to eggs, nuts, fish (and is in need to carry and Epipen in fear of an anaphylaxis episode) was catered by the monks with his own special meals. Another example of love! The monks made sure Panagioti was well feed!!! After trabeza we got involved in many tasks, we assisted in the gardens picking and sorting oranges, and cutting vines. I remember one day we sorted the large oranges from the small ones and the next day we delivered the large oranges to the poorer monks who lived in the kellia. Those monks could not stop thanking us! Another example of love. The day after we delivered around 15 cases of oranges, a pilgrim donated would you believe the same amount to the Monastery!!! Truly, the fathers give from one hand and receive as much if not more back from the Theotokos in the other. Panagioti loved having fun with the monks; no doubt sword fighting with sticks was amongst his favorite games. Also he enjoined kissing the relics of the saints in church after the evening meal, he kept asking me to get “permission” from the Geronda to “borrow” the “girdle of the Theotokos” to show his friends!!!! He kept laughing at the thought of it being in Melbourne. We loved going for walks in the country side, and visited the kelli of venerable Elder Joseph and his grave site countless times. Such grace!!!! We walked up to the old Athoniada Academy and admired its former grandeur. We thought of the teachers who were educated in its walls in the dark days of Ottoman rule, who served the Greek nation in its difficult times of need like Evgenious Voulgaris. We visited on many occasion the museum at Vatopedi, which contained artifacts from classical Greece and Byzantium to the present. Panagioti was amazed at the huge Russian communion chalices. We loved looking at the old byzantine icons, the ornately decorated vestments and the ancient manuscripts. Such a rich tradition!!!

It is so hard to believe that less than twenty years ago this Monastery was in a dilapidated state. When Elder Ephraim arrived at this monastery with his monks, Vatopedi was in ruins. Due to the love of the Elder for our sweet Jesus and the Theotokos, a great miracle was performed at Vatopedi and is performed every day; the spiritual revival of Vatopedi and in turn the refurbishment of the monastery which dates over 1000 years! I tried explaining to Panagioti, when he looked at icons in the museum, that these painting where more than five or six times older than white settlement in Australia. Or that the “girdle of the Theotokos” is two thousand years old! Such history, all within the walls of Vatopedi! Then again what makes Vatopedi truly great are not only the relics, but the living relics the monks; who live according to the tradition of our faith and who pass this on to every person who visits the monastery. Both I and Panagioti thank our Theotokos for giving us the blessing of visiting her holy Monastery, the Elder and the monks.