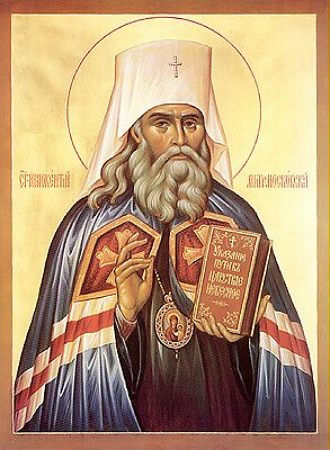 St. Innocent was born in 1797 to a poor family in a remote village in a rural area of Irkutsk Province in Russia, and named Ioann (John). He was orphaned at the age of six, and assigned to the seminary at Irkutsk at nine. Shortly after he arrived, the relics of St. Innocent of Irkutsk were found, whose name and apostolic ministry young Ioann later would inherit. He was a hard working and outstanding student, who also was seen as humble and kind, and for these qualities he was given the name of Veniaminov after the late Bishop Veniamin of Irkutsk who was beloved by the faithful.

After he was ordained to the priesthood, he spent a year as a parish priest in Irkutsk, and then volunteered to go into missionary work in Alaska, though many other clergy were afraid to do so, because they had heard it was a wild country filled with dangerous savages. His wife broke into tears when she heard the news of this mission, but was unable to dissuade him, so at age 26, he and his family traveled over 2,000 miles, taking over a year to complete this arduous journey, and arrived finally in the Aleutian Islands in 1824.

He built a church with his own hands, traveled to remote areas by kayak, dog sled, even reindeer. He learned six dialects of the native language and developed the first written alphabet for the native Aleuts. He translated the Bible and other sacred books into their language. Years later, he also translated scriptural books into other Alaskan native languages. He also studied all aspects of the local area, and wrote ethnographic, geographical and linguistic works for which he later was elected an honorary member of the Russian Geographical Society and Moscow Royal University.

He returned to Russia to seek more resources and support for the Alaska mission, where, after his wife died, he took monastic vows and the name Innocent, after Bishop Innocent of Irkutsk. He was later consecrated Bishop, and was assigned to the new see of Kamchatka-kurils and the Aleutian Islands, to which he returned, tirelessly building churches, guiding priests, seeking to bring the Gospel and the Holy Orthodox Church to native peoples of Alaska. He encouraged the use of English, and the use of indigenous clergy.

He was later made Archbishop, and later, having returned to Russia, ultimately became Metropolitan of Moscow, where he continued his missionary zeal, establishing and guiding an Orthodox Missionary Society. He is perhaps especially remembered for his zeal to bring the gospel to the world. The apostolic preaching of Metropolitan Innocent spread to a vast territory including Alaska and Chukotka, the Aleutian, Kurils and Commander Islands, eastern Siberia, the Amur region, Kamchatka and the Far East. Metropolitan Innocent brought the light of Christian faith to the Aleutians, Koloshes, Kurils, Eskimo, Kenai, Chugaches, Kamchadals, Oliutores, Negidales, Mongols, Samogirs, Golds, Gulyaks, Koryaks, Tungus, Chukcha, Yakutians, and Kitians.

The preaching of the gospel was a primary achievement in the life of Metropolitan Innocent and occupied a special place in his apostolic service. The metropolitan had a great homiletic gift and was a remarkable preacher. He never missed an opportunity to preach and talk to people and tirelessly instructed his clergy to do the same.

Holy St. Innocent, pray to God for us.

Our Father among the saints, St. Innocent, Metropolitan of Moscow, Enlightener of Siberia & America, is commemorated on March 31.