The false peace of the Antichrist through a world government

The false peace of the Antichrist through a world government 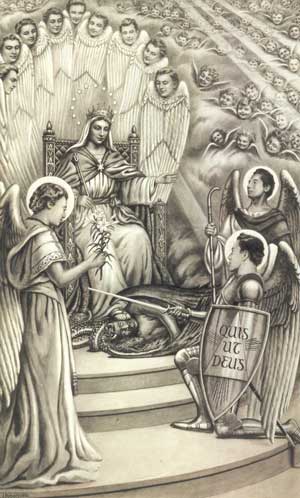 Christian Revelation teaches that the world will not last forever. One day, God will put an end to the terrestrial world. The Church does not know the date of this event, only God the Father knows: «But as for that day and hour, nobody knows it, neither the angels of heaven, nor the Son, no one but the Father alone.» (Matthew 24:36.)

Jesus Christ, however, left us with many prophecies that are clear enough to allow us to understand the unfolding of what will precede the end times, these are called the «signs of the times». Before His second and final coming on Judgment Day, Jesus Christ will have prepared the hearts of men through a series of events. Is there any official text from the Catholic Church about these events preceding the end times? Yes, it can be found in the recent Catechism of the Catholic Church (issued in 1992), paragraphs 675 to 677 :

«Before Christ’s second coming the Church must pass through a final trial that will shake the faith of many believers. (Cf. Luke 18:8: ‘But when the Son of man comes, will he find any faith on earth?’ and Mathew 24:12: 12: ‘And with the increase of lawlessness, love in most people will grow cold.’) The persecution that accompanies her pilgrimage on earth (cf. Luke 21:12; John 15:19-20) will unveil the ‘mystery of iniquity’ in the form of a religious deception offering men an apparent solution to their problems at the price of apostasy from the truth. the supreme religious deception is that of the Antichrist, a pseudo-messianism by which man glorifies himself in place of God and of his Messiah come in the flesh. (Cf. 2 Th 2:4-12; I Th 5:2-3; 2 Jn 7; I Jn 2:1 8, 22.)

«The Antichrist’s deception already begins to take shape in the world every time the claim is made to realize within history that messianic hope which can only be realized beyond history through the eschatological judgement. The Church has rejected even modified forms of this falsification of the kingdom to come under the name of millenarianism, especially the ‘intrinsically perverse’ political form of a secular messianism.

«The Church will enter the glory of the kingdom only through this final Passover, when she will follow her Lord in his death and Resurrection. (Cf. Rev 19:1-9.) The kingdom will be fulfilled, then, not by a historic triumph of the Church through a progressive ascendancy, but only by God’s victory over the final unleashing of evil, which will cause his Bride to come down from heaven. (Cf Rev 13:8; 20:7-10; 21:2-4.) God’s triumph over the revolt of evil will take the form of the Last Judgement after the final cosmic upheaval of this passing world. (Cf. Rev 20:12; 2 Pt 3:12-13.)

The loss of faith

Jesus announces a final persecution against His Church before His return, through the seemingly universal (but temporary) success of the Antichrist, who will establish a «false peace» on earth (cf. 1 Thessalonians 5:3), through a world government and a world religion that will deny Jesus Christ as the true Messiah.

This coming of the Antichrist will be preceded by a general apostasy, the loss of faith of most of Christians: » Let no one deceive you in any way. For unless the apostasy comes first and the lawless one is revealed, the one doomed to perdition, who opposes and exalts himself above every so-called god and object of worship, so as to seat himself in the temple of God.» (2 Thess 3-4.) For if people were faithful to their Christian beliefs, they would never submit to the lies of the Antichrist. The work of the enemies of God to undermine the faith is clear for everyone to see today.

Saint Paul also wrote in his First Epistle to Timothy (4:1-2): «Now the Spirit explicitly says that in the last times some will turn away from the faith by paying attention to deceitful spirits and demonic instructions through the hypocrisy of liars with branded consciences.» And in 2 Tim 3:1-5: «But understand this: there will be terrifying times in the last days. People will be self-centered and lovers of money, proud, haughty, abusive, disobedient to their parents, ungrateful, irreligious, callous, implacable, slanderous, licentious, brutal, hating what is good, traitors, reckless, conceited, lovers of pleasure rather than lovers of God, as they make a pretense of religion but deny its power.»

The logical result of this loss of faith is the establishment of a world without God, an idea which has been dreamt of by many people over the last centuries (for example, the French Revolution in France, the Bolshevik Revolution in Russia), but especially but some Masonic circles called «the Illuminati». (See article page 4). In these secret circles, one is longing for what John Lennon wrote in his popular song Imagine in 1971; many people sing it without thinking about the meaning of the lyrics, but this song could very well be described as a hymn to a godless world government :

It’s easy if you try

No hell below us

Above us only sky

Imagine all the people

It isn’t hard to do

Nothing to kill or die for

And no religion too

Imagine all the people

You may say that I’m a dreamer

But I’m not the only one

I hope someday you’ll join us

And the world will be as one