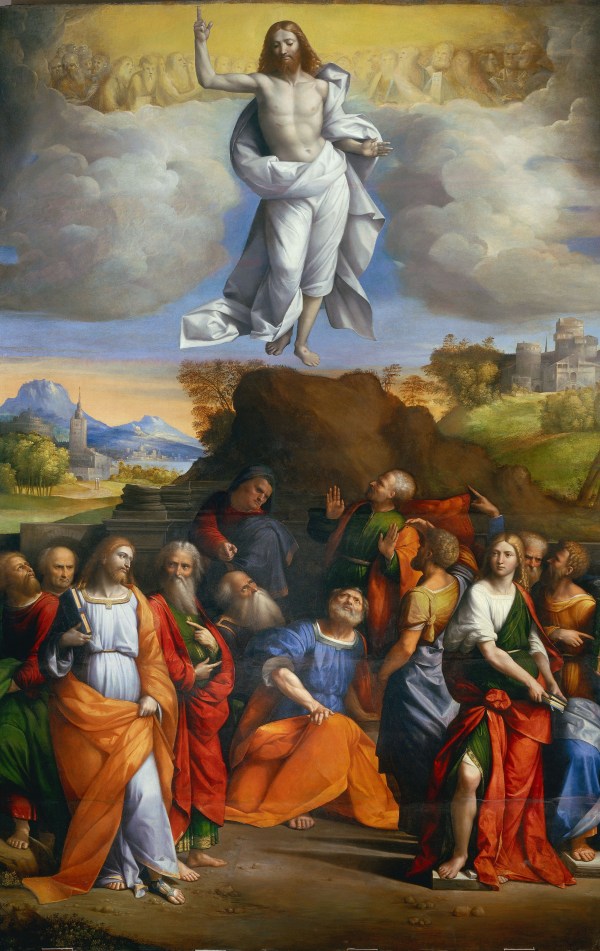 The Day of Ascension, is celebrated in many European countries by being a public holiday. Belgium, Germany, Denmark, Finland, France, Iceland, Liechtenstein, Luxemburg, Monaco, Netherlands, Norway, Austria, Sweden and Switzerland are honouring the Ascension of our Lord, Jesus Christ.

… and ascended into heaven, and sits at the right hand of the Father

The ascension of Jesus Christ is the final act of his earthly mission of salvation. The Son of God comes «down from heaven» to do the work which the Father gives him to do; and having accomplished all things, he returns to the Father bearing for all eternity the wounded and glorified humanity which he has assumed (see e.g. Jn 17).

The doctrinal meaning of the ascension is the glorification of human nature, the reunion of man with God. It is indeed, the very penetration of man into the inexhaustible depths of divinity.

We have seen already that «the heavens» is the symbolical expression in the Bible for the uncreated, immaterial, divine «realm of God» as one saint of the Church has called it. To say that Jesus is «exalted at the right hand of God» as St. Peter preached in the first Christian sermon (Acts 2:33) means exactly this: that man has been restored to communion with God, to a union which is, according to Orthodox doctrine, far greater and more perfect than that given to man in his original creation (see Eph 1-2).

Man was created with the potential to be a «partaker of the divine nature,» to refer to the Apostle Peter once more (2 Pet 1:4). It is this participation in divinity, called theosis (which literally means deification or divinization) in Orthodox theology, that the ascension of Christ has fulfilled for humanity. The symbolical expression of the «sitting at the right hand» of God means nothing other than this. It does not mean that somewhere in the created universe the physical Jesus is sitting in a material throne.

The Letter to the Hebrews speaks of Christ’s ascension in terms of the Jerusalem Temple. Just as the high priests of Israel entered the «holy of holies» to offer sacrifice to God on behalf of themselves and the people, so Christ the one, eternal and perfect High Priest offers himself on the cross to God as the one eternal, and perfect, Sacrifice, not for himself but for all sinful men. As a man, Christ enters (once and for all) into the one eternal and perfect Holy of Holies: the very «Presence of God in the heavens.»

…we have a great high priest who has passed through the heavens, Jesus, the Son of God. … (Heb 4:14)

For it was fitting that we should have such a high priest, holy, blameless, unstained, separated from sinners, exalted above the heavens. … He has no need like those high priests to offer sacrifice daily, first for his own sins and then for those of the people; he did this once and for all when he offered up himself.

Now, the point in what we are saying is this: we have such a high priest, one who is seated at the right hand of the throne of the Majesty in heaven, a minister in the sanctuary and the true tabernacle which is set up not by man but by the Lord (Heb 7:26; 8:2).

For Christ has entered, not into a sanctuary made with hands, a copy of the true one, but into heaven itself, now to appear in the presence of God on our behalf (Heb 9:24).

… when Christ had offered for all time a single sacrifice for sins, he sat down at the right hand of God, then to wait until his enemies should be made a stool for his feet (Heb 10:12-13; Ps 110:1).

Thus, the ascension of Christ is seen as man’s first entry into that divine glorification for which he was originally created. The entry is made possible by the exaltation of the divine Son who emptied himself in human flesh in perfect self-offering to God.