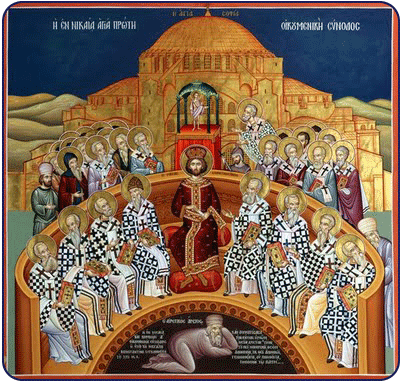 On this day, the seventh Sunday of Pascha, we celebrate the First Ecumenical Synod, of the three hundred and eighteen God-bearing Fathers, which took place in Nicæa.

Enlighten my mind with your rays.

Calling the Son a stranger to the Father’s essence,

Arius proved to be a stranger to God’s glory. 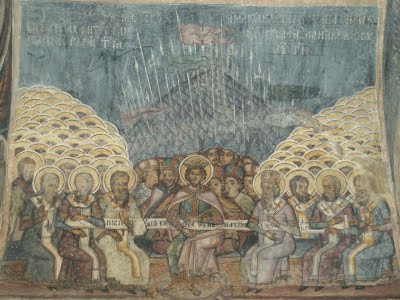 We celebrate the present Feast for the following reason. When our Lord Jesus Christ, Who wore our flesh, had ineffably accomplished His entire Economy, and had been restored to His Father’s Throne, the Saints, wishing to show that the Son of God became truly man and that God became perfect man, ascended, and sat at the right hand of the majesty on high, and that this Synod of the Holy Fathers thus proclaimed and confessed Him to be one in essence and honor with the Father, decreed for this reason that the present Feast should fall after the glorious Ascension, exalting this assembly of so many Fathers, as it were, for proclaiming that He Who ascended in the flesh was true God and perfect man in the flesh.

This Synod took place under St. Constantine the Great, in the twentieth year of his reign. For, after the persecution of Christians had come to an end, he first ruled in Rome; but subsequently, he founded the all-blessed city that was named after him, in the year 5838 from the creation of the world; it was then that the Arian controversy began. Arius, who hailed from Libya, went to Alexandria, where he was ordained a Deacon by the Holy Hieromartyr Peter of Alexandria. Thereafter, he began to blaspheme against the Son of God, proclaiming that He was a creature, who had come into being from non-existence and was far removed from the Divine dignity, and that He was called the Wisdom and Word of God by a misuse of language. Arius was, as he pretended, opposing the impious Sabellios, who said that the Godhead was one Person and one Hypostasis, being the Father at one time, the Son at another time, and the Holy Spirit at yet another time. When Arius uttered these blasphemies, the great Peter deposed him from the Priesthood, after beholding Christ as an infant on the Holy Table, clad in a torn garment and saying that Arius had rent it. Achillas, who succeeded Peter as Archbishop of Alexandria, reinstated Arius, in fulfillment of a promise; in addition, he ordained him a Presbyter and put him in charge of the School of Alexandria. After the repose of Achillas, Alexander become Archbishop. Finding that Arius was again uttering the same blasphemies and worse, he drove him from the Church, deposing him through a synod. As Theodoretos says, Arius taught that Christ’s nature was mutable, and he was the first to vomit forth the idea that the Lord assumed inanimate and soulless flesh. Arius, having brought many over to his impiety, he writes, coöpted Eusebios of Nicomedia, Paulinos of Tyre, Eusebios of Cæsarea, and others, and proceeded against Alexander. But Alexander, sending word of his blasphemies and his deposition throughout the world, raised up many to defend himself. 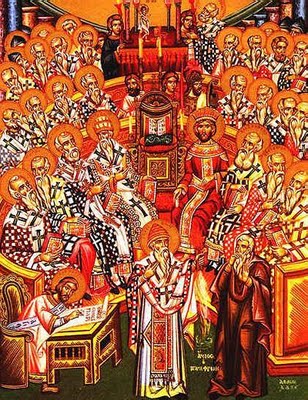 Since the Church was in confusion and there appeared no remedy for this dogmatic strife, St. Constantine the Great transported the Fathers in question from every region of the inhabited earth, at public expense, to Nicæa and arrived there himself. After all the Fathers had taken their seats, only when bidden did he sit down, and not on a royal throne, but on a seat that was lower than his dignity dictated. When the charges against Arius had been read out, both Arius and those of like mind with him were placed under anathema. The Holy Fathers declared the Word of God to be one in essence, one in honor, and co-unoriginate with the Father. They also set forth the Holy Symbol of the Faith, taking it as far as the clause: “And in the Holy Spirit.” The ensuing clauses were completed by the Second Ecumenical Synod. In addition to this, the First Synod determined when and how we should celebrate the Feast of Pascha, and not with the Jews, as had previously been the custom. They promulgated twenty Canons pertaining to ecclesiastical order. The Holy Equal-to-the-Apostles Constantine the Great, after everyone else, signed the Holy Symbol of Faith in red letters.

Of these holy Fathers, two hundred and thirty-two were Hierarchs, while eighty-six were Priests, Deacons, or monks; altogether three hundred and eighteen Fathers were present. The most illustrious were the following: St. Sylvester, Pope of Rome and St. Metrophanes, Patriarch of Constantinople were both ill and were present through their representatives; St. Alexander of Alexandria, together with St. Athanasios the Great, who at that time was an Archdeacon; St. Evstathios of Antioch and Patriarch Macarios of Jerusalem; St. Hosius of Cordova; St. Paphnoutios the Confessor; St. Nicholas the Myrrh-Gusher and St. Spyridon of Trimythous, who baptized a philosopher that was there, after refuting his arguments and proving to him the threefold nature of the Godhead. Since two of the Fathers—both of them Hierarchs—had passed on to God during the course of the Synod, St. Constantine the Great, after placing copies of the definition of the Holy Synod in their respective coffins and enclosing them securely therein, found the documents confirmed and signed by them, through the ineffable command of God. 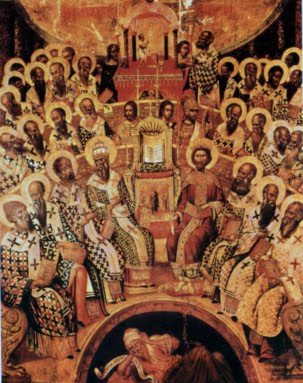 Upon the conclusion of the Synod, since the rebuilding of the Imperial City was now complete, St. Constantine summoned all of those holy men; they all came and, after praying for some time, confirmed that it was the Queen of cities and dedicated it to the Mother of the Word, by order of the Emperor. And thus each of the Saints returned home.

Since the Great Emperor Constantine had not yet departed to God, but was reigning together with his son, Constantios, Arius approached him, saying that he had abandoned all of his heresies and wished to be reunited to the Church of God. Having written down his blasphemies and hung them round his neck, pretending that he believed in the decrees of the Synod, and striking his own writings with his hand, he said that this was what he believed. At all events, the Emperor ordered the Patriarch of Constantinople to receive Arius into communion. The Patriarch at that time was Alexander, the successor of Metrophanes, who, knowing the evil of this man’s ways, hesitated and besought God to show him whether it was His will that he should commune with Arius. Since the time was approaching when he would have to liturgize with him, he became more fervent in his prayer. But when Arius came to the Church, somewhere near the Column of Porphyry he felt stabbing pains in his stomach and went into a public convenience; there he burst open, and disgorged all his entrails, undergoing the same fate as Judas for his betrayal of the Word. Having sundered the Son of God from the essence of the Father, he himself was torn asunder and was found dead; and thus was the Church of God delivered from his corruption.

By the intercessions of the three hundred and eighteen God-bearing Fathers, O Christ our God, have mercy on us. Amen. 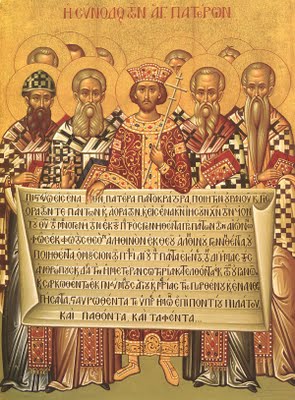 Apolytikion in the Plagal of the Fourth Tone

Most glorified art Thou, O Christ our God, Who hast established our Fathers as luminous stars upon the earth, and through them didst guide us all to the true Faith. O Most Merciful One, glory be to Thee.

Kontakion in the Plagal of the Fourth Tone

The Preaching of the Apostles and the doctrines of the Fathers confirmed the one Faith in the Church. And wearing the garment of truth woven from the theology on high, she rightly divideth and glorifieth the great mystery of piety.