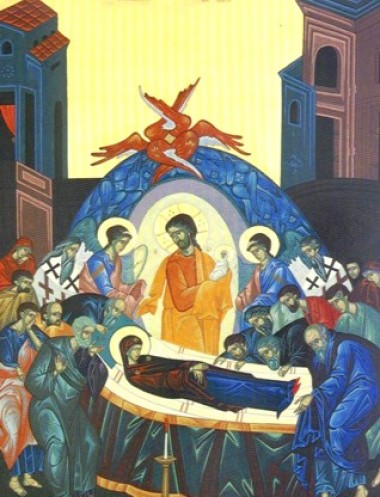 Who is she who rises resplendent, all pure, and bright as the sun?

There is no mention of the Dormition or Assumption in the New Testament, only in apocryphal sources, but it is one of the earliest feast observed in the church. The feast of the Dormition dates at least from the 5th C. It was always celebrated in Jerusalem on this date, whilst in some other parts of the Eastern church the date varied. In the 7th C, the Byzantine emperor, Maurice decreed that the Dormition be celebrated everywhere on the 15th. Later the Western Church adopted the same date, but always kept it simply as the Assumption.

In the Eastern Church, unlike the West, this feast has two parts: 1. the death and burial of the Ever-virgin Mother of Christ, 2. Mary’s resurrection and ascension. In the icon for this feast only the Dormition is presented. Mary is sleeping in the Lord on a scarlet and red cloth nearer the custom of her own people, since the Jews did not use a coffin as we do, and it has always been held that Mary died in Gethsemane, Jerusalem. Around her, forming a human halo, are the Apostles, except Thomas, who has been winged «from the ends of the universe» to mourn Mary’s death. Peter as the chief apostle is censing the bed. St. James, «brother of the Lord» and first bishop of Jerusalem is in the upper left wearing the distinct garb of a bishop. The only apostle daring to lean over the coffin is «the beloved disciple», to whom our Lord entrusted His mother after His death. He is touching the leg of Mary as a gesture of comfort and tenderness.

High above is another scenario, the Lord Jesus Christ himself, who has come to claim His mother. He is bearing a tiny figure. Here the role is reversed for Mary is always depicted with her Son in Orthodox icons. So Mary is now held in the arms of Him whom she held and will be introduced to his Father and her mystical spouse, the Holy Spirit. As He prepares to take her home Our Lord is accompanied by six winged cherubim.

So the feast of the Dormition for the Orthodox actually commends her soul into her Son’s hand. This is followed by a short sojourn of her body in the tomb. On the third day after Mary’s burial, St. Thomas who has been caught up in a cloud from India is transported to a place in the air above the tomb of the Virgin. From that point, he beheld the translation of her body into the heavens, and cried out to her, «Whither goes you, O all-holy one?» She removed her girdle and gave it to him saying, «Receive this, my friend.» And then she was gone.

He then descended to find the other disciples keeping watch over the sepulchre of the Theotokos, and said to them, «How is it that ye were counted worthy to behold the repose of Our Lord’s Mother, and I was not?» And then he bade his fellow apostles to open the tomb that he may look upon the blessed Mother and bid her farewell. When they granted Thomas his request, they were aghast to find the tomb empty. All that remained were her burial clothes. She had been bodily transported to paradise.

The Orthodox Church has never insisted that the Assumption be a dogma as the Roman Church has done. The former has taken the attitude that for those who are affirmed in faith in the Resurrection and Ascension of our Lord, it is evident that, if the Son of God, took His human nature from blessed Mary, she who served the Incarnation had in her turn to be assumed into the glory of her Son who was risen and ascended into heaven.

John Damascus who lived in the seventh and eighth centuries preached three beautiful sermons on the Dormition and the Assumption. It is with some extracts from these that I conclude this meditation.

To-day Mary begins her second life through Him who was the cause of her first being. She gave a beginning, that is the life of the body, to Him who had no beginning in time.

To-day the living city of God is transferred from the earthly to the heavenly Jerusalem, and she, who, conceived her first-born and only Son, the first-born of all creation, the only begotten of the Father, rests in the Church of the first-born: the true and living Ark of the Lord is taken to the peace of her Son. The gates of heaven are opened to receive the receptacle of God, who, bringing forth the tree of life, destroyed Eve’s disobedience and Adam’s penalty of death. And Christ, the cause of all life, receives the chosen mirror, the mountain from which the stone without hands filled the whole earth. She, who brought about the Word’s divine Incarnation, rests in her glorious tomb as in a bridal-chamber, whence she goes to the heavenly bridals, to share in the kingdom of her Son and God, leaving her tomb as a place of rest for those on earth.

Let angels minister to her body. Follow your Queen, O daughters of Jerusalem, and, together with her virgins in the spirit, approach your Bridegroom in order to sit at His right hand. Make haste, Lord, to give Your Mother the welcome which is her due. Stretch out Your divine hands. Receive Your Mother’s soul into the Father’s hands unto which You did commend Your spirit on the Cross. Speak sweet words to her: «Come, my beloved, whose purity is more dazzling than the sun, you gave me of your own, receive now what is mine. Come, my Mother, to your Son, reign with Him who was poor with thee.» Depart, O Queen, depart, not as Moses did who went up to die. Give up your soul into the hands of your Son. Return earth to the earth, it will be no obstacle. Lift up your eyes, O people of God. See in Sion the Ark of the Lord God of powers, and the apostles standing by it, burying the life-giving body which received our Lord. Invisible angels are all around in lowly reverence doing homage to the Mother of their Lord. The Lord Himself is there, who is present everywhere, and filling all things, the universal Being, not in place. He is the Author and Creator of all things. Behold the Virgin, the daughter of Adam and Mother of God; through Adam she gives her body to the earth, her soul to her Son above in the heavenly courts. Let the holy city be sanctified, and rejoice in eternal praise. Let angels precede the divine tabernacle on its passage, and prepare the tomb. Let the radiance of the spirit adorn it. Let sweet ointment be made ready and poured over the pure and undefiled body. Let a clear stream of grace flow from grace in its source. Let the earth be sanctified by contact with that body. Let the air rejoice at the Assumption. Let gentle breezes waft grace. Let all nature keep the feast of the Mother of God’s Assumption.

Come, let us depart with her. Come, let us descend to that tomb with all our heart’s desire. Let us draw round that most sacred bed and sing the sweet words, «Hail, full of grace, the Lord is with you. Hail, predestined Mother of God. Hail, you chosen one in the design of God from all eternity, most sacred hope of earth, resting-place of divine fire, holiest delight of the Spirit, fountain of living water, paradise of the tree of life, divine vine-branch, bringing forth soul-sustaining nectar and ambrosia. Full river of spiritual graces, fertile land of the divine pastures, rose of purity, with the sweet fragrance of grace, lily of the royal robe, pure Mother of the Lamb of God who takes away the sin of the world, token of our redemption, handmaid and Mother, surpassing angelic powers.» Come, let us stand round that pure tomb and draw grace to our hearts. Let us raise the ever-virginal body with spiritual arms, and go with her into the grave to die with her. Let us renounce our passions, and live with her in purity, listening to the divine canticles of angels in the heavenly courts. Let us go in adoring, and learn the wondrous mystery by which she is assumed to heaven, to be with her Son, higher than all the angelic choirs. No one stands between Son and Mother. On your departure, in lowly reverence to the Holy Trinity to whom you didst minister, the goodness of the Father, the power of the Spirit, receiving the Uncreated Word, the Almighty Wisdom and Power of God. Heal our passions, cure our diseases, help us out of our difficulties, make our lives peaceful, send us the illumination of the Spirit. Inflame us with the desire of your son. Render us pleasing to Him, so that we may enjoy happiness with Him, seeing thee resplendent with your Son’s glory, rejoicing for ever, keeping feast in the Church with those who worthily celebrate Him who worked our salvation through thee, Christ the Son of God, and our God. To Him be glory and majesty, with the uncreated Father and the all-holy and life-giving Spirit, now and for ever, through the endless ages of eternity. Amen.

O Theotokos, living and overflowing fountain, strengthen those who applaud you in this spiritual gathering; and in your holy feast make them worthy of crowns of glory. O Most holy Theotokos, save us!

Pray for us O holy Mother of God; that we may be worthy of the promises of Christ. Amen.

ON THE GLORIOUS ASSUMPTION OF OUR LADY

Hark! She is call’d. The parting hour is come.

A piece of heav’nly earth, purer and brighter

Than the chaste stars, whose choice lamps come to light her

While through the crystal orbs, clearer than they,

She climbs and makes a far more milky way.

Sighs to his silver mate, ‘Rise up, my love!

Rise up, my fair, my spotless one!

The winter’s past, the rain is gone.

The spring is come, the flowers appear.

No sweets but thou art wanting here.

Come away, my dove! Cast off delay.

The court of Heav’n is come

To wait upon thee home. Come, come away!’

Or quickly would, wert thou once here.

The spring is come, or, if it stay,

‘Tis to keep time with thy delay.

The rain is gone, except so much as we Detain in needful tears to weep the want of thee.

Or, if it make less haste,

If summer come not, how can winter go?’ …

‘Maria, mother of our King.’

And may the bright

Crown of a most incomparable light

Embrace thy radiant brows. O may the best

Of Heav’n, the humble pride of earth.

Live, mistress of our song. And when

Our weak desires have done their best,