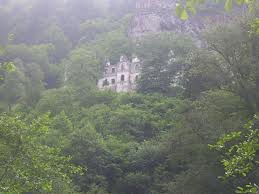 Dear Brothers and Sisters, Please allow me to take you at a slow pace trough one mysterious but indeed real story. It was 29th of November 2011 when three men, coming from the city Banja Luka (Republika Srpska), began their trip to monastery Ostrog (Montenegro) to bow down to the holy relic of the saint – Holy Vasilije.

When they arrived early in the morning in front of the monastery, the door was closed. One of the three said: “Don’t worry brothers! When we have managed to arrive in front of the door, the Saint will recognize our wish and will bless our intention.”

At this moment a running fast monk appeared from nowhere, as if he came out directly from the surrounding mountains, unlocked the heavy iron door of the church and said: “Please come in and bow down in front of Holy Vasilije – honor to him”. The monk opened the coffin with the holy relic of the saint. At this moment, the church got full of an indescribable smell which God decorated with his power. He cures sick people, gifts faith to unbelievers, and love to those who hate.

After praying to God and to saint Vasilije from Ostrog, the three men went out of the Holy place, radiating joy and happiness across their face.

Afterwards, the three men spontaneously decided to take the way in direction of the city Cetinje (Montenegro) where the monastery of the Saint Petar Cetinjski is located. The hand of Saint Johannes Baptist is guarded in this monastery as well.

When they arrived, the door of the monastery was open and the three men went in. They bow down in front of holy relics, prayed and took bless.

After a short rest, the three men followed the road to the Adriatic Sea, being absolutely determined to visit the island Sveti Stefan and particularly the monastery Praskvica. They were astonished with the beauty of the monastery and its corresponding church dedicated to Holy Nikola.

Shortly before leaving one monk appeared almost from nowhere and asked them to host them for a while. Being unable to deny the monks wish they followed the path to the best room of the monastery. “Oh my lovely Serbs”, the monk said, after they explained him that they come from the city named Banja Luka. Very good people live there, therefore the God always protects them. The old monk narrated the story of his childhood in Karin (A City located in Dalmatia), where he was abused and humiliated due to his belief in God. With seventeen years he decided to become a monk, to leave Dalmatia and to continue his live in monastery Praskvica where he has been living for more than fifty years.

When the night fell the three men asked for bless in order to leave and to continue their trip back to Banja Luka. In this moment the old monk stood up in order to advice them all.

Two of them where married the youngest not yet but well mature for this life step. The monk addressed to the youngest: “Listen my son, within one year, around this period (he was waiving his head as if he was trying to calculate the exact date), you will get a son! Then he added, addressing to the priest (One of the three man was a priest but the old monk was not informed about this!): “If he doesn’t baptize your child, bring him here and I’ll do it”.

The three man left being astonished. On the way back the priest was wondering on the monk’s prophecy. He said that monk would be able to say this only by means of the Holly Spirit. The young man was only repeating: ”AMIN! It will happen as Hegumen said. When I’ll get a sun, I’ll give him the name Dimitirje”.

On the same day, in the evening of 29th November 2011, thousands kilometer away from the monastery Praskvica a train coming from Holland was arriving at the main train station of the city Erlangen in Germany. One girl, who recently finished her dissertation in the Netherlands, spending a lot of efforts, got off the train. She performed her doctoral thesis in the field of electrical engineering. The job offer came from the city Erlangen and she accepted it, without really knowing why. Why didn’t she return back to her lovely Greece? Why maybe not to her Island Evia, in order to express her gratitude to Saint Johannes the Russian? Why didn’t she end up in another corner of the glob?

On this day, while the sun was still shining, when the young man was bowing down to the Saint Vasilije, praying: “Holy Vasilije, please give me that what my heart seeks for, a good woman. My wish is not a sin because I seek for a blissful married life. At the same time, the Greek girl prayed: “Holy Johannes please help me to get luck at the unknown place I’m traveling to”.

At this evening, at the moment when the young man got a bless from Hegumen Dimitrije, the Greek girl was getting off the train.

After the three men returned back to Banja Luka, the oldest one remained there, whilst the other two drove back to Germany, the priest to Frankfurt a.M and the young man to Erlangen.

In the following days, after Igor returned back to work, a new face attracted his attention. A new employee, the Greek Ioanna! They immediately fell in love. The bless connected them! A few months later, they got married at the church of Holy Georgios in Wiesbaden. Two priests blessed them, one Serbian and one Greek. On 15thNovember 2012 Ioanna gave a birth to beautiful boy, to whom they gave the name Dimitrije. Within one year, the prophecy of Hegumen Dimitrije was indeed fulfilled.