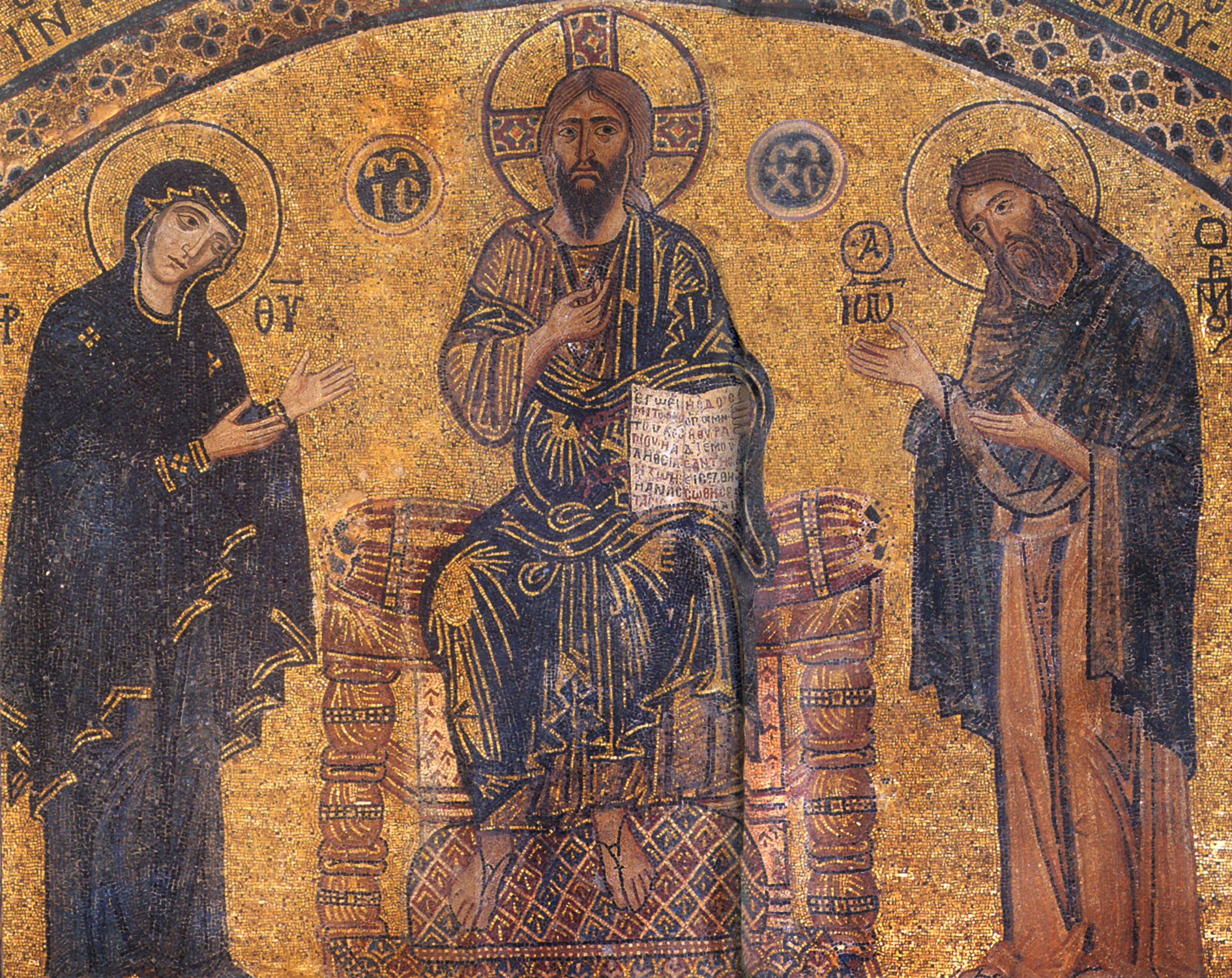 Deisis (Supplication) - Christ between the Holy Virgin and St. John the Baptist. Byzantine mosaic in the esonarthex of the catholicon (main church) of the Monastery of Vatopaidi (late 11th - early 12th century).

From the outside, the Monastery is polygonal in appearance and its enceinte, strongly reminiscent of a fortress, has at various points battlements and three defensive towers. The buildings standing today are representative of every period since the Monastery’s foundation, a fact due to the many rebuildings which have taken place, either to make good damage caused in a variety of ways, as, for example, by pirate raids or serious fires, or for purposes of expansion to meet new needs created by what has usually been the large number of Vatopaidi monks.

Of its outer sides, the north, parallel with the sea, was built in 1654 and is of a length of some 200 metres. This accommodates the Abbot’s quarters, the synodikon*, the secretariat, the old library, monks’ cells and what is today the guesthouse, the latter having been built in 1782 in the place of one of the nine towers which the Monastery originally had. The central section, which was burnt down and rebuilt recently, houses the new library and the icon storeroom.

The south-eastern side was rebuilt in 1818 and, apart from cells and various other buildings, contains the infirmary and accommodation for the aged, provided in 1856 in a two-storey building behind the sanctuary of the main church (katholikon). The enceinte is completed by the western side, built in its present form in 1864.

It is at the lowest point of this side that the great gate of the Monastery opens. This is approached by ascending many flights of semicircular steps on the rising ground. Entry is by a double gate, closed every night with two massive, ironclad wooden doors. Above the first of these, protected by a glass-encased vault is the icon of Our Lady Pyrovolitheisa and next to it an inscription giving the date of the painting of the interior of the domed porch (1858).

As the visitor passes through the main gate, he emerges into the spacious paved courtyard, which contains various buildings, such as the refectory and the olive oil store in the foreground and the main church (katholikon) in the background. Incorporated into the katholikon are the clock-tower and the phiale*, while next to it stands the bell-tower. Further on, to the south and west of the courtyard, are the new bakery, the quadruple fountain, the Chapels of Sts Cosmas and Damian and of the Holy Girdle, and the old bakery.

The katholikon of the Vatopaidi Monastery is an imposing building, dedicated to the Annunciation of the Blessed Virgin (feast day 25 March), which has remained virtually unaltered for 10 centuries. In terms of architecture, it follows the style of the katholikon of the Megiste Lavra Monastery, with minor deviations. It is divided into five parts:

The exonarthex is elongated and by means of a marble stairway connects the katholikon with the northern wing. In the middle of this stairway is the Paramythia Chapel, with the miracle-working icon of the same name. The two-storey, open exonarthex must have been added in the 17th century. Above the marble doorway of the entrance, leading to the exonarthex, is an inscription of 1426, which must be that of earlier repairs. The fresco of the exonarthex, which depict the 24 stanzas of the Akathistos Hymn*, warrior saints and the Second Com-ing, were repainted in 1843.

Three doors open on to the narthex. The central door is clad with bronze plates on which are embossed plant and other decoration, as well as a depiction of the Annunciation in relief. According to tradition, this door came from the Church of the Holy Wisdom in Thes-saloniki and was brought to the Monastery after the city was taken by the Turks (1430). The other two doors lead to the Chapels of St Nicholas and St Demetrius, respectively, on the right and left of the lite. Over the door of the Chapel of St Nicholas is a depiction of the Saint in mosaic (14th century), in a rather poor state of preservation. On the right is a large fresco of the Blessed Virgin holding the Holy Child. This fresco replaced the miracle-working icon of the Paramythia, which after the miracle was removed to the chapel of the same name.

Also to be found in the exonarthex, built into the walls, are Byzantine parapets and reliefs from the ancient city of Thyssos, which stood on the site of Vatopaidi. The reliefs bear the forms of marine deities, such as the Titan Crius.

b. The inner narthex (lite)

The lite, an area created to meet the liturgical needs of monasteries, takes its name from the service of the same name conducted in it. On the pilasters of the arches to the right and left of the central door and above the door itself can be seen the famous mosaics with their depictions of the Annunciation (early 14th century) and the Deisis* (late 11th, early 12th century) – the only mural mosaics to be preserved anywhere on the Holy Mountain. The wall painting of the lite -and, indeed, of the whole katholikon- was carried out, according to an inscription of a later date, in the reign of Andronicus II Palaeologue, in 1312, but has been painted over on many occasions. In spite of this treatment, the frescosmurals remain masterpieces of the so-called Macedonian School and are attributed to pupils of Panselinos. This attribution is lent particular support by the series of scenes from the Passion and by various other sections which have escaped repainting.

Further back on the left, in the narthex of the Chapel of St Demetrius, the miraculous icon of the Theotokos which bears the name of Esphagmeni is painted on the wall.

This area, between the lite and the main body of the church, takes its name from the night service held in it. At the back, on the right, a tomb of the mid-Byzantine period is preserved, built into the wall. According to tradition, it contains the relics of the Monastery’s founders, Athanasius, Nicholas and Antonius, a tradition completely confirmed when the tomb was opened recently. These three figures are portrayed above it in a mural, together with the Emperors Theodosius the Great, Arcadius, Ho-norius and John Cantacuzene. At the back on the left can be seen, in a fresco, the miraculous icon of Our Lady Antiphonitria.

The mesonyktikon, which, it should be noted, takes this form only at Vatopaidi, was painted in the year 1760.