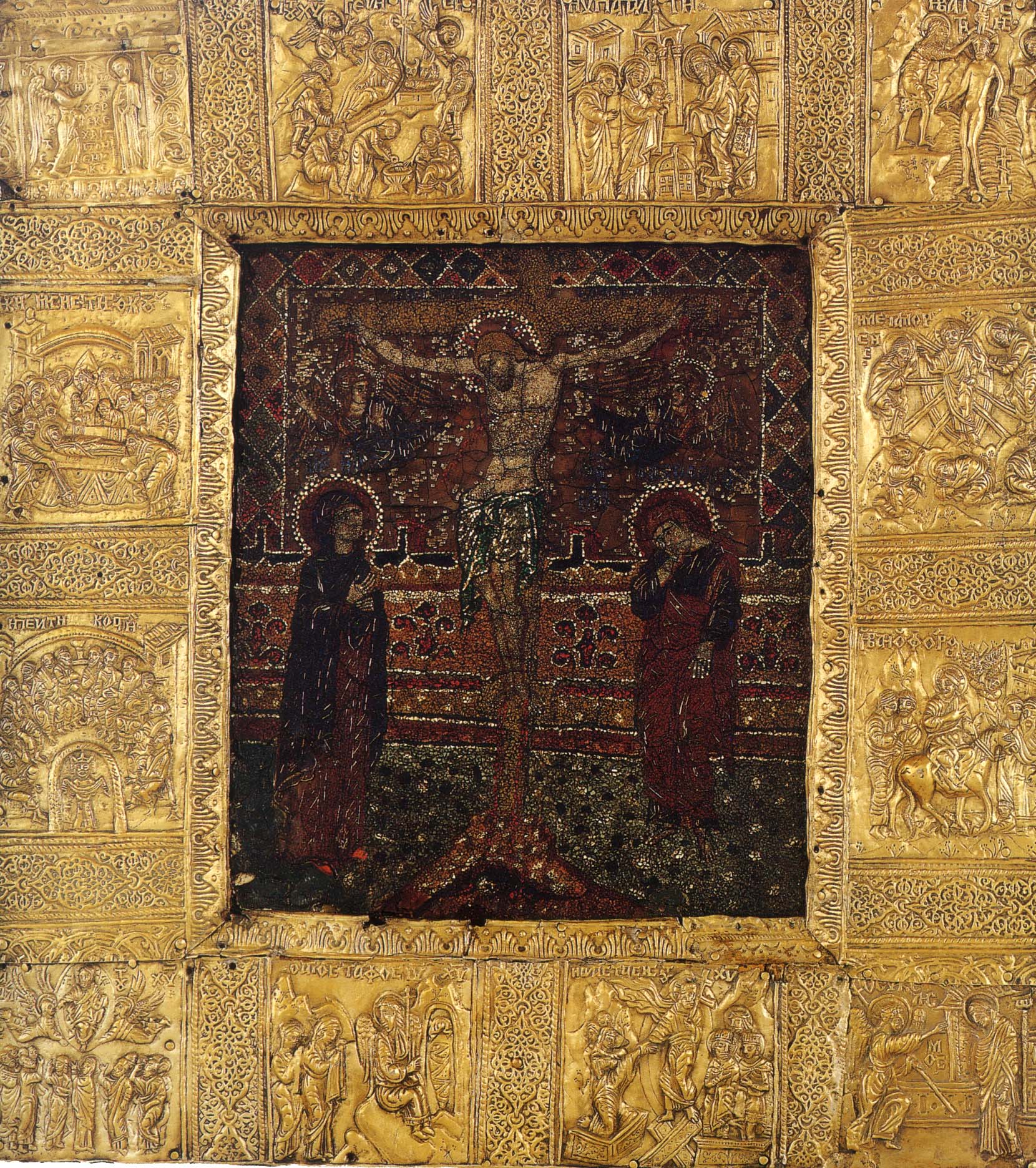 This, the main body of the katholikon, preserves for us all the grandeur of Byzantine taste: a magnificent floor, porphyry columns, frescos (see the lite) and mosaics, a carved and gilt wooden iconostasis, innumerable silver and gilt hanging lamps and silver candelabra.

The main door of the nave, dating from 1567, is the work of the monk Lavrentios. Made of ebony and silver, it is of very fine workmanship, with an impressive arrangement of decorative designs.

The floor dates from the 10th century and is beautifully inlaid with multi-coloured marble. Tradition relates that the four great columns of the central dome, of porphyry, were brought from Italy. Immediately above the columns on the east is a depiction of the Annunciation in mosaics, divided into two, which dates from the mid 11th century.

The carved wooden iconostasis, of oak, dating from 1788, replaced an older one of marble, a part of which remains in its original position. The large icons on the screen, work of the Palaeologue era, were gilded by Count Dmitri Nikolayievitch Seremetiev in 1857. In front of the two eastern columns are shrines with fine Byzantine icons of Our Lady Hodegetria and the Hospitality of Abraham. According to tradition, these icons came from the Church of Holy Wisdom in Thessaloniki. Above the abbatial throne on the left (1619) is an icon of the 14th century depicting Sts Peter and Paul, a gift of the Despot Andronicus Palaeologue (1421).

From the central dome hangs the great silver candelabrum, with its vast number of candle and lamp-holders. It was made in Vienna in 1882 and replaced an older brass one which today hangs in the lite. The two smaller candelabra, given by the people of Santorini, were made in Moscow in 1832.

The sanctuary contains a number of important sacred treasures of the Monastery. First among these is the icon of Our Lady Vimatarissa or Ktitorissa, which is in a marble shrine on the synthronon* behind the altar. Opposite the icon and on the altar is the cross of Con-stantine the Great, and, on the right, the silver-overlaid candle, which St Sabbas, the sacristan, hid together with the icon in the well of the sanctuary for 70 years.

The sanctuary is also decorated with a large number of fine icons and with the votive offerings of various personages. Among those deserving particular mention are the old icons of the Hodegetria and the Archangel Gabriel, both of the 14th century, and the miniature icons of the Blessed Virgin and of Christ, the so-called ninia (= little children) of the Empress Theodora, given by Anna Palaeologina Cantacuzene. What, however, is regarded as the Monastery’s priceless treasure is the Girdle of Our Lady, which is preserved in separate pieces in three gilt cases. Amongst other highly valued objects are two cases, one containing a large piece of the True Cross and the other a piece of the reed which the Jews gave to Christ in mockery at the Crucifixion.

Some 200 other holy relics are contained in a host of extremely valuable silver reliquaries. Among these are the skulls of St John Chrysostom, St Gregory the Theologian, St lakovos the Persian and St Mercurius, and parts of the skulls of Sts Sergius, Florus, Pelagia, Theodosia, Arethas, Theodore the Warrior and St Damian, the metopic bone of the Apostle Andrew, a part of the right hand of the martyr St Catherine and of St Stephen the Protomartyr, as well as relics of Sts Parasceve, Marina, Artemius, Gregory of Decapolis, Procopius and Tryphon. Also preserved complete are the remains of St Evdokimos of Vatopaidi, which were discovered in 1842 while the cemetery church was being restored. Also in the sanctuary are the skulls of the Patriarchs of Constantinople Maximus IV (1491-1497) and Cyprianus (1707-1714), and of the Patriarch of Antioch Gerasimus (1884-1891), who died and were buried at the Monastery.