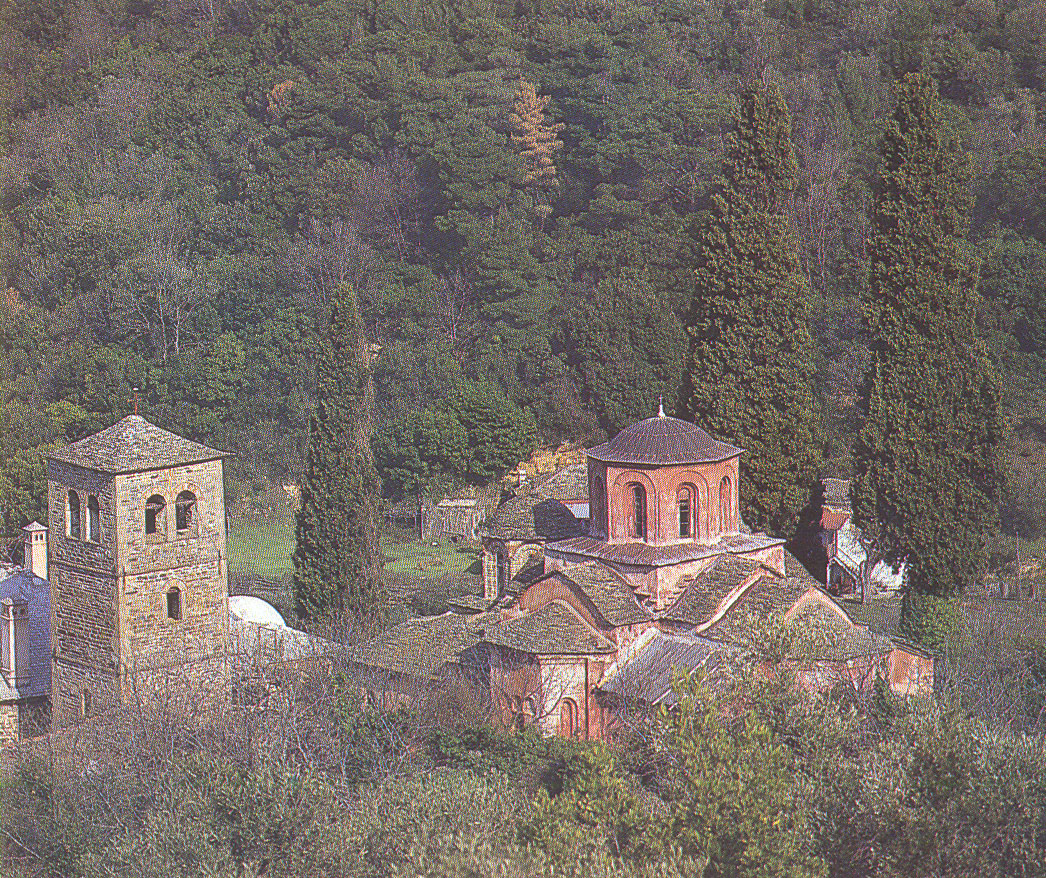 Scattered around the Monastery are chapels, kathi-smata*, boathouses, storehouses and other buildings serving its needs. As the visitor lands from the sea, he first encounters the great arsanas*, which was built in 1496 by Stepan, Voivode of Moldo-Wallachia, and has a chapel dedicated to St Nicholas. Next to the arsanas is the wheat store, built in 1820 by the Voivode Skarlatos Kallimachis. As he climbs to the Monastery, the visitor sees on the right and left the following buildings: the flour mill (1869), the smithy (1884), the cemetery with the Chapel of the Holy Apostles (1683), the Chapel of St Modestus (1818) with accommodation for the Monastery’s lay workers, the stable and a garden building with a chapel dedicated to St Tryphon (1882). Last, in front of the outer gate of the Monastery (1822) there is a large kiosk (1780), while a second kiosk (1877), to the west, marks the site of a well at which, on the third day of Easter, the service for the blessing of the waters takes place, after which there is a procession with the wonderworking icon of the Vimatarissa.

The Vatopaidi Monastery has a large number of dependencies. Among these, the Sketes of St Demetrius and St Andrew are of particular importance.

The former lies half an hour’s walk from the Monastery, to the south-west, on the site of the small Chalceos Monastery, of whose existence there is evidence as early as the 10th century. According to tradition, it was built by relatives of St Demetrius. Marble work of the 12th century, part of the kyriakon*, is all that survives from the Byzantine era. It was organised as a skete in the 18th century, when its first typikon* was drawn up (1729). The wall paintings which adorn the interior of the kyriakon date from 1755 and those in the exonarthex, which was built later (1796), from 1806. The cemetery chapel was built in 1764.

The skete is idiorrhythmic and consists of 21 dwellings, most of them now in ruins.

The imposing Russian Skete of St Andrew (commonly called ‘Serai’) stands on a site once occupied by the small Xystrou Monastery. There was a kellihere dedicated to St Antony, when, after resigning their office, two Patriarchs of Constantinople, St Athanasius III Pate-laros (1651) and Seraphim II (1761) took up residence on this spot. These Patriarchs successively restored the building and the church of St Antony, giving the kelli its present name. In 1842, the first Russian monks began to settle here. They extended the buildings and built the impressive Church of St Andrew. The /ce///was given the rank of a skete by a patriarchal sigillium of 1849, and in 1900, the former Patriarch of Constantinople loakeim III consecrated its kyriakon. This has a length of 60 metres, a breadth of 33, and a height of 29, and, as such, is one of the biggest churches in the Balkans. This skete, from the time of its foundation, followed the coenobitic way of life, and at one period had as many as 800 monks. The fire of 1956, which destroyed its western side and the gradual reduction in the number of monks in the first half of the present century resulted in it being abandoned. Today, the Athonite School operates in the southern wing of the skete.

Vatopaidi has 27 kellia scattered around it, some close at hand and others at a greater distance. Five of these are in Karyes, two on the spot called ‘Yiftadika’, and eight in the ‘Kolitsou’ area. This place-name is derived from the old monastery of Kaletzi, whose high tower, built by the Emperor John Cantacuzenus, still stands today.

The Vatopaidi Monastery, from Byzantine times onwards, had a large number of metochia beyond the bounds of the Holy Mountain in the broader Balkan region. By means of these it met the needs of its large community and at the same time was in a position to make its contribution to national and philanthropic causes. Its metochia abroad were confiscated by the governments of the states where they were situated, and most of those on Greek territory (for example, those of Chalcidice, Ouranoupoli, Ammouliani, Nea Roda and Souflar) were given away free to shelter and provide a livelihood for refugees from Asia Minor. Today the Monastery still possesses the metocH of St Nicholas on the Vistonida lake, that of St Phocas in Chalcidice, and one other on the island of Samos.