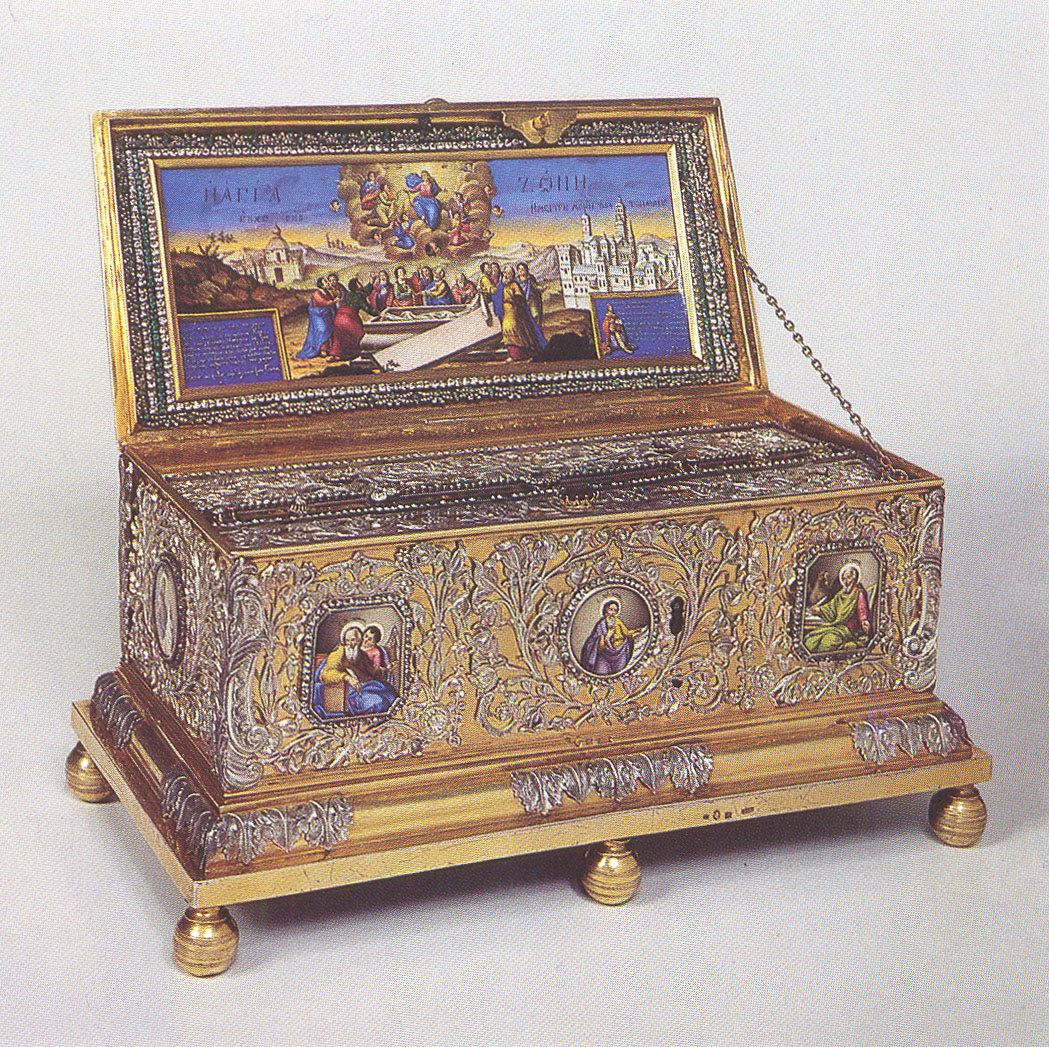 The Treasures of the Monastery

THE HOLY GIRDLE OF OUR LADY

The Girdle of the Blessed Virgin Mary, today divided into three pieces, is the only remaining relic of her earthly life. According to tradition, the girdle was made out of camel hair by the Virgin Mary herself, and after her Dormition, at her Assumption, she gave it to the Apostle Thomas. During the early centuries of the Christian era it was kept at Jerusalem and in the 4th century we hear of it at Zela in Cappadocia. In the same century, Theodosius the Great brought it back to Jerusalem, and from there his son Arcadius took it to Constantinople. There it was originally deposited in the Chalcoprateion church, whence it was transferred by the Emperor Leo to the Vlachernae church (458). During the reign of Leo VI ‘the Wise’ (886-912), it was taken to the Palace, where it cured his sick wife, the Empress Zoe. She, as an act of thanksgiving to the Mother of God, embroidered the whole girdle with gold thread, giving it the appearance which it bears today.

In the 12th century, in the reign of Manuel I Comnenus (1143-1180), the Feast of the Holy Girdle on 31 August was officially introduced; previously it had shared the Feast of the Vesture of the Virgin on 1 July. The Girdle itself remained in Constantinople until the 12th century, when, in the course of a defeat of Isaacius by the Bulgar King Asan (1185), it was stolen and taken to Bulgaria, and from there it later came into the hands of the Serbs. It was presented to Vatopaidi by the Serbian Prince Lazarus I (1372-1389), together with a large piece of the True Cross. Since then it has been kept in the sanctuary of the katholikon. Under Turkish rule, the brethren of the Monastery took it on journeys to Crete, Macedonia, Thrace, Constantinople and Asia Minor, to distribute its blessing, to strengthen the morale of the enslaved Greeks and to bring freedom from infectious diseases.

The miracles performed by the Holy Girdle in various ages are innumerable. The following are a very few examples:

At one time, the inhabitants of Ainos called for the presence of the Holy Girdle and the Vatopaidi monks accompanying it received hospitality at the house of a priest, whose wife surreptitiously removed a piece of it. When the fathers embarked to leave, although the sea was calm, the ship remained immobile. The priest’s wife, seeing this strange phenomenon, realised that she had done wrong and gave the monks the piece of the Girdle, whereupon the ship was able to leave immediately. It was because of this event that the second case was made. The piece in question has been kept in this down to the present.

During the Greek War of Independence of 1821, the Holy Girdle was taken to Crete at the request of the people of the island, who were afflicted by the plague. When, however, the monks were preparing to return to the Monastery, they were arrested by the Turks and taken off to be hanged, while the Holy Girdle was redeemed by the British Consul, Domenikos Santantonio. From there the Girdle was taken to Santorini, to the Consul’s new home. News of this quickly spread throughout the island. The local bishop informed the Vatopaidi Monastery and the Abbot, Dionysios, was sent, in 1831, to Santorini. The Consul asked the sum of 15,000 piastres to hand over the Girdle, and the people of the island, with touching eagerness, managed to collect together the money. Thus the Holy Girdle was bought back and Abbot Dionysios returned it to Vatopaidi.

What had happen with the priest’s wife of Ainos was repeated in the case of the Consul’s wife. She too, un beknown to her husband, cut off a small piece of the Holy Girdle before it was handed back to the Abbot Dionysios. Within a very short period her husband died suddenly and her mother and sister became gravely ill. In 1839, she wrote to the Monastery asking that representatives should be sent to take possession of the piece which she had removed.

In 1864, the Holy Girdle was taken to Constantinople, since there was a cholera epidemic among the inhabitants. As soon as the ship bearing it approached the harbour, the cholera ceased and none of those already suffering from it died. This strange miracle excited the curiosity of the Sultan, who had the Girdle brought to the Palace so that he could reverence it.

During the time when the Holy Girdle was at Constantinople, a Greek of Galata asked that it should be taken to his house, since his son was seriously ill. When, however, the Holy Girdle arrived at his house, his son was already dead. The monks, however, did not give up hope. They asked to see the dead boy, and as soon as the Girdle was placed on him, he was raised from the dead.

In 1894, the inhabitants of Madytos in Asia Minor sought that the Holy Girdle should be taken there because a plague of locusts was destroying their trees and crops. When the ship carrying the Girdle came into the harbour, the sky was filled with clouds of locusts, which then began to fall into the sea, so that it was difficult for the vessel to anchor. The people of Madytos, seeing the miracle, kept up a constant chant of Kyrie eleison from the shore.

Down to our own times, the Holy Girdle has continued to work many miracles, particularly in the case of infertile women, who, when they request it, are given a piece of cord from the case holding the Girdle and, if they have faith, become pregnant.