St. Joseph of Arimathea (with Orthodox hymn to the saint from St. Anthony’s Orthodox Monastery in Arizona) – July 31

St. Joseph of Arimathea (with Orthodox hymn to the saint from St. Anthony’s Orthodox Monastery in Arizona) – July 31 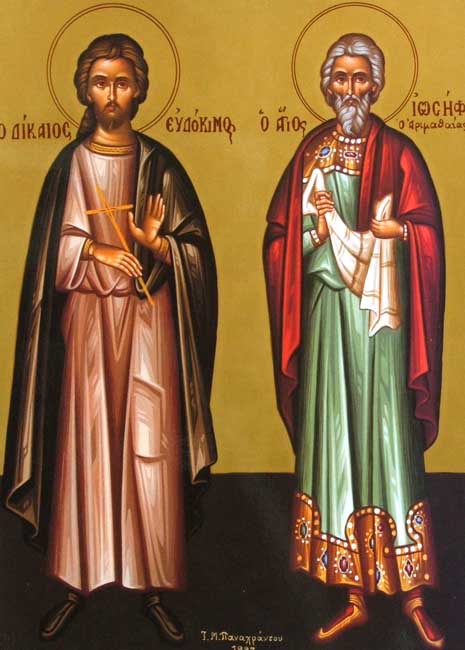 All that is known for certain concerning him is derived from the canonical Gospels. He was born at Arimathea — hence his surname — “a city of Judea” (Luke 23:51), which is very likely identical with Ramatha, the birthplace of the Prophet Samuel, although several scholars prefer to identify it with the town of Ramleh. He was a wealthy Israelite (Matthew 27:57), “a good and a just man” (Luke 23:50), “who was also himself looking for the kingdom of God” (Mark 15:43). He is also called by St. Mark and by St. Luke a bouleutes, literally, “a senator”, whereby is meant a member of the Sanhedrin or supreme council of the Jews. He was a disciple of Jesus, probably ever since Christ’s first preaching in Judea (John 2:23), but he did not declare himself as such “for fear of the Jews” (John 19:38). On account of this secret allegiance to Jesus, he did not consent to His condemnation by the Sanhedrin (Luke 23:51), and was most likely absent from the meeting which sentenced Jesus to death (cf. Mark 14:64). 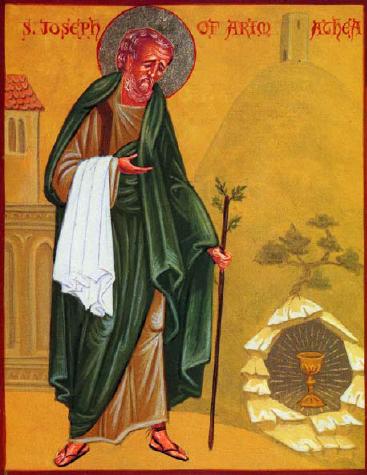 The Crucifixion of the Master quickened Joseph’s faith and love, and suggested to him that he should provide for Christ’s burial before the Sabbath began. Unmindful therefore of all personal danger, a danger which was indeed considerable under the circumstances, he boldly requested from Pilate the Body of Jesus, and was successful in his request (Mark 15:43-45). Once in possession of this sacred treasure, he — together with Nicodemus, whom his courage had likewise emboldened, and who brought abundant spices — wrapped up Christ’s Body in fine linen and grave bands, laid it in his own tomb, new and yet unused, and hewn out of a rock in a neighbouring garden, and withdrew after rolling a great stone to the opening of the sepulchre (Matthew 27:59, 60; Mark 15:46; Luke 23:53; John 19:38-42). Thus was fulfilled Isaiah’s prediction that the grave of the Messias would be with a rich man (Isaiah 53:9). The Greek Church elebrates the feast of Joseph of Arimathea on 31 July, and the Roman Church on 17 March. The additional details which are found concerning him in the apocryphal “Acta Pilati”, are unworthy of credence. Likewise fabulous is the legend which tells of his coming to Gaul A.D. 63, and thence to Great Britain, where he is supposed to have founded the earliest Christian oratory at  Glastonbury. Finally, the story of the translation of the body of Joseph of Arimathea from Jerusalem to Moyenmonstre (Diocese of Toul) originated late and is unreliable.

Source: Catholic Encyclopedia (1917) This particular encyclopedia, though Roman Catholic and not Orthodox, is an especially scholarly, informative and credible reference-book.

Let us honour the man that gave burial to God and showed compassion to Him by Whose mercy all things exist: Christ the Angel of Great Counsel’s Noble Counselor: who gave his narrow grave to Christ and received as recompense the vast spaciousness of Heaven, where he entreateth the Saviour to show His mercy to those praising him.

The apolytikion (and the second icon) is from here: http://www.stanthonysmonastery.org/music/Menaion/b5831e.pdf