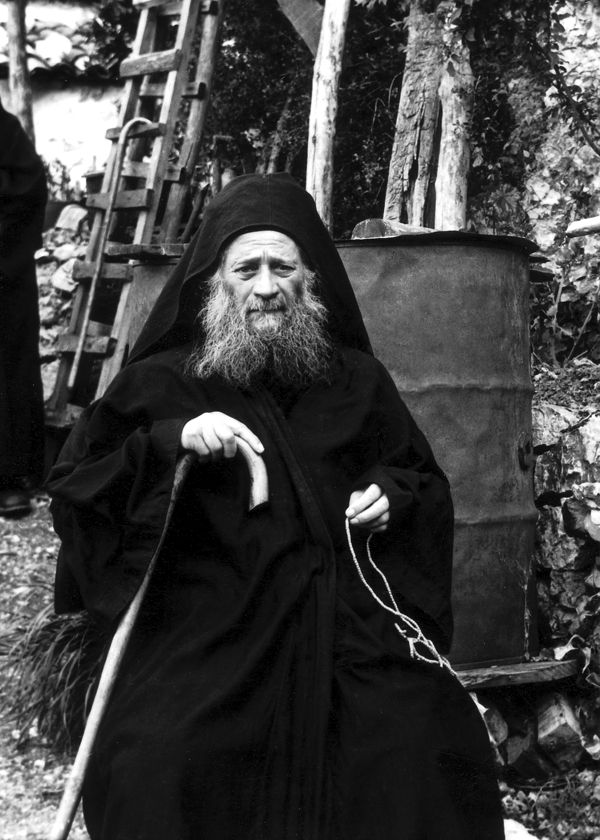 5. The Time of Bitter Struggles

Such were the patterns of their outward movements, but the deeper meaning of all this was the pursuit of grace and the struggle which combatants have to take on to this end. With his moral background and his upbringing in accordance with the Christian principles of the time, the Elder had grown up in true chastity in the unaffectedly traditional environment of his native island. Up to the time when he left to seek the monastic life, he had made no concession to anything that could be called carnal. When he read in the Lives of the Saints about warfare and temptations of this kind, it seemed strange to him, how it was possible for these things to operate and to torment the spiritual warriors in the absence of anything to cause them.

When divine grace visits certain people to an exceptional degree, with the particular purpose of using them at some time to strengthen others, it equips them with appropriate experiences, as it knows best. Often it shows them that it is calling them in particular; it shows them manifest signs that it is fighting on their side and assisting them; and it reveals to them the ways to defeat the adversary and the rewards of victory either partially or fully, knowing as it does the character and receptiveness of each person. Again, when they go into the arena for the contest and weary themselves in the struggle, it comforts them by providing succour accordingly. The things that of necessity we note here are certainly extreme by our standards; but the reader must be aware that we are not describing our own experiences. We are simply passing on what is related by the Elders, who are trustworthy workers and witnesses of what they have been taught by divine grace and by the long experience that they have had by the grace of Christ. To seek divine mercy, the intervention of divine grace, in order to perfect oneself in the life in Christ, is both essential and feasible. Besides, the Lord too encourages us by saying, ‘ask, seek, knock’ (Mt 7:7), and through His other parables which make the same point. But the coming of this succour and help – when it comes, where it comes from, in what measure, or for how long – this does not depend on man, nor does it enter into his plans: his sole task is insistent invocation. The ever-memorable Elder was in this state of insistent and also arduous invocation all the time, but particularly in his first years, for almost half of the forty years he lived on Athos.

When the goodness of God with its unchanging characteristics visits people, it never remains without increase; all that is required is for them not to reject grace out of inexperience, because the whole purpose is a state of ascent so that the spiritual warrior attains ‘to mature manhood, to the measure of the stature of the fullness of Christ’ (Eph. 4:13). But as divine grace increases its presence in the warrior, so temptations multiply, and their intensity is proportionate to this state. In this bitter struggle where the adversaries and their operations are supranatural (on the one hand Grace, and on the other Satan the tempter), I must confess with fear that it requires an iron will and the courage of a true warrior. In this tug-of-war, each side pulls the warrior’s will violently towards itself, and ‘who is wise and will keep these things, and will understand the mercies of the Lord?’ (Hosea 14:9, LXX).

The subtlety of the intervention and operation of grace is incomprehensible to man, and he perceives its operation only as grace itself shows him. But the presence and operation of the evil one is not the same: he never ceases to hide himself, to dissimulate, to pretend, and to deceive by guile those who lack sufficient experience. The presence of the evil spirit himself causes fear and alarm in the soul; quite apart, of course, from the sight of him, which is always horrible and unbearable and for that reason very rare. But the activity of the evil spirit is often believable, because he disguises himself by means of the senses and the intellect, presenting himself as an operation of grace, as St Paul says: ‘he disguises himself as an angel of light’ (2 Cor. 11:14). In this most delicate and difficult position, between grace and delusion, the warrior stands with a firm and unflinching will, ‘forgetting what lies behind and straining forward to what lies ahead’ (Phil. 3:13); and he uses as his one mighty weapon tears and mourning, the only things that frighten the enemy.

The ever-memorable Elder told us that after they had settled at St Basil, when he was labouring assiduously at stillness and prayer, at a certain moment the light increased again; the contemplation of his intellect in the depths of his heart was interrupted, as he was delighting in the sweetness of the prayer, and was turned towards the supranatural light which was spread all around. Suddenly there appeared before him a great host of Monks in battle order, and opposite them, a little way off, again drawn up on the form of an army, a large number of ferocious black figures, hideous in appearance and in an ugly mood. ‘Then I saw a tall, illustrious general coming towards me, and he said, “Do you want to go and fight in the front line?” And I was delighted because I did want to, and I asked him, if possible, to put me there; and I felt in my soul a great hatred and fury against those adversaries, who I understood were demons. Then this general did indeed take me out of the line where I was standing with the other Fathers; we went past three or four lines, which seemed like battalion positions, and then he brought me to the front line, where there were still one or two people. He looked at me, smiled and said, “If anyone wants to fight bravely against these dark enemies, I do not hinder him but help him.” When I came to myself after this vision, I soon realised its meaning and said to myself, “Humble Joseph, prepare to make good your promises.” And indeed, it was not long before the trials increased.’