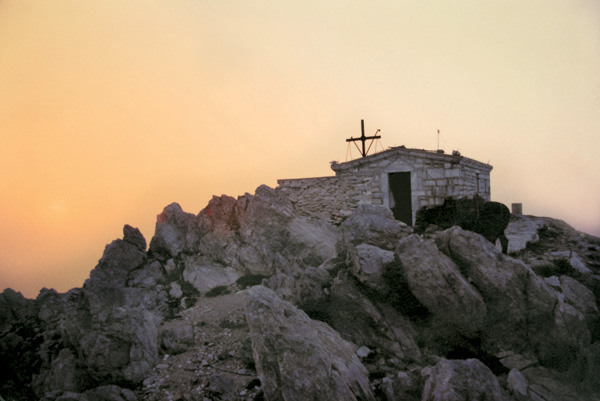 It would be an omission not to speak of the other basic characteristic of our ever-memorable Elder, the great love and sympathy he had for his neighbour. In particular he loved the poor and those in trouble, and even more those who were suffering in soul, and for this reason they never stopped visiting us.

His last days were very painful, because his advanced heart condition interfered with his breathing and he got very tired. For us, however, this was a lesson and an opportunity to practice patient endurance. We were aware of his struggle, and while we tried to give him some relief, he would console us in appropriate ways with practical examples, speaking especially of the vanity of the world. He told us, ‘The day for me to leave is getting near. The way I am now, I’m not good for anything, and I can’t struggle any more either.’ The ever-memorable Elder did not in the least forget his aim; and with various contrivances, at every pretext life provided he found a means to struggle and bring forth fruit. Being unable to move or to lie down because of his illness, he sat in a makeshift armchair – a folding one – and wept constantly for the vanity of life. He awaited his release from this life as the greatest happiness that could befall him and murmured troparia for the departed, when he was not having too much difficulty breathing. ‘Arsenios,’ he said jokingly, ‘When are we leaving? You’re not praying, it seems, and we’re delayed.’ For almost forty days, his last days, he ate nothing: he just received Communion every day and took a little water-melon.

The Elder showed such care and concern about his departure that one would have thought he really was going on a journey at that time, and was waiting for his transport. Hopelessly, we tried at least to give him some relief by whatever means we could, whether medical or practical, because there were periods when his difficulty in breathing was very severe. But he said to us, ‘Don’t go to any trouble, boys, I shan’t be staying. I have been waiting for this time for so long! Just pray that nothing stands in the way of my hope. As long as a man lives, he cannot be free from concern.’

On the fourteenth of August 1959 he was making great preparations; and having in mind the next day, which was the Dormition of the Mother of God, he was impatient. There was something he was waiting for. At the same time, his condition worsened. Previously some friends of his, lay people, had come by to greet him, and when they wished him recovery, he said to them, ‘No, no. I am leaving soon! When you hear the bells in three days’ time, you will know that your friend has gone. I reckon it will be on the feast of our Most Holy Lady.’

On the next day, the feast of the Mother of God, he was at the Liturgy. With difficulty he said the Trisagion, and received Communion for the last time, saying, ‘Provision for the journey of eternal life.’ He gazed fixedly at the icon of our Lady whom he loved so much, as if he were asking her for something. Something that she knew all about. His calm tears bore witness to his soul’s innermost petition to her; to her, who had so often consoled him and advised him to nurture a firm hope in her compassion.

But does not our most sweet Lady secretly tell all of us who dwell in this divine garden of hers to hope in her? Is not her vital and most evident providence in our everyday life perhaps a continual reminder that her motherly love remains always with us? Our most sweet Mistress, the true anchor of our hope, what else can we humble men rely on in these evil days when everything has been turned upside down, if not your unfailing guardianship and your maternal boldness towards your Son? How apt is the troparion from the Kanon to our Lady by John of Euchaita (Theotokarion, Sunday of the Sixth Tone, ninth ode) which cannot, I think, be unknown to any of us Athonites:

‘As the servant lifts up his outward eyes to the hand of his master, All-hymned Lady, so I lift up my outward and inward eyes to thee, my Mistress, my Lady and Life, that thou mayest have compassion on me.’

It was with this faith and ardour that our ever-memorable Elder started out, and with this hope that he directed his last petition to the Guardian and Nurturer of sacred Athos, this arena of spiritual contest which will continue up to the end the noble mission which it received a thousand years ago or even before.

Our Lady carried out to the full her promise to the Elder that he should place his hope in her with her final gift, when she received his soul on the day of her own holy Dormition.

Seated in his chair and battling with continued difficulty in breathing, he kept Father Arsenios by him, as always, when he had given all the others his blessing. When Father Arsenios wanted to rub his feet for a moment to give him a little relief, he did not let him, and told him, ‘Stop, Father Arsenios, don’t do anything. Everything is finished. I’m going.’ He took the hand of his inseparable comrade in ascetic life as if to say good-bye for the last time, looked up for a moment and peacefully gave up his blessed soul.

When we gathered round him, he was no longer with us. Once he had celebrated with us the divine passing over of our Lady the Mother of God, he went off to celebrate this joyful day in heaven as well. It was a Friday morning, after sunrise. The next day when his funeral took place – there on the spot where he died, as he had asked – all the Fathers from the Skete came. He loved everyone, and was loved by everyone in return.

In the last days before he fell asleep he had said to one of our brothers, who was away on the day of the funeral and was unable to be with us, ‘When I leave, I will visit you where you are staying.’ And indeed, as that brother later told us, on precisely the fortieth day after his death the Elder visited him in his cell, and the whole room was filled with fragrance.

Again, there lived in Thessaloniki a devout old lady well known to the Elder, who told us that on the fifteenth of August, in other words the same day that he died, he came to see her visibly where she lived, and she asked him in bewilderment, ‘How do you come to be here, Elder? Have you died, by any chance?’ and he replied, ‘Yes; and I came by to say good-bye to you.’

There are, of course, many other stories of this kind. Several times after his death he appeared and consoled many people; but we pass over these stories so that the people concerned can tell them themselves, and because the Elder did not set much store by such things.