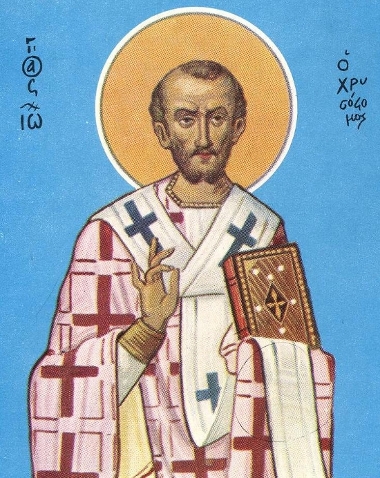 John was born in Antioch in the year 354. His father, Secundus, was an imperial commander and his mother’s name was Anthusa. Studying Greek philosophy, John became disgusted with Hellenic paganism and adopted the Christian Faith as the one and all-embracing truth. Meletius, Patriarch of Antioch, baptized John, and his parents also subsequently received baptism. Following his parents’ repose, John was tonsured a monk and lived a strict life of asceticism. He then wrote a book, On the Priesthood, after which the Holy Apostles John and Peter appeared to him, and prophesied that he would have a life of great service, great grace and great suffering. When he was to be ordained a priest, an angel of God appeared simultaneously to John and to Patriarch Flavian (Meletius’s successor). While the patriarch was ordaining John, a shining white dove was seen hovering over John’s head. Glorified for his wisdom, asceticism and power of words, John was chosen as Patriarch of Constantinople at the behest of Emperor Arcadius. As patriarch, he governed the Church for six years with unequalled zeal and wisdom. He sent missionaries to the pagan Celts and Scythians and eradicated simony in the Church, deposing many bishops guilty of this vice. He extended the charitable works of the Church and wrote a special order of the…

Divine Liturgy. He shamed the heretics, denounced Empress Eudoxia, interpreted Holy Scripture with his golden mind and tongue, and bequeathed the Church many precious books of his homilies. The people glorified him, the envious loathed him, and the Empress, on two occasions, sent him into exile. John spent three years in exile, and reposed as an exile on the Feast of the Elevation of the Precious and Life-giving Cross, September 14, 407, in the town of Comana in Georgia. Before his repose, the Holy Apostles John and Peter appeared to him again, as did the Holy Martyr Basiliscus (May 22) in whose church he received Communion for the last time. His last words were, «Glory be to God for all things,» and with that, the soul of the golden-mouthed patriarch was taken into Paradise. Chrysostom’s head reposes in the Church of the Dormition in Moscow, and his body reposes in the Vatican in Rome.

The «Golden-mouth,» blessed by God,

Who is the adornment and boast of the Church:

Profound of heart and mind,

And a golden-stringed harp of words.

He plumbed the depths of mysteries,

And found the pearl that shines as the stars.

Exalted in mind to heaven’s height,

And his vision is true throughout history.

He gave all to the Son of God.

He revealed to us the horrors of sin,

And the virtues that adorn a man;

He showed us the most precious mysteries,

And all the sweet richness of Paradise.

Evangelist, interpreter of the Gospel

And bearer of spiritual joy,

He would accept no injustice.

And received his torment as a pledge of salvation.

This servant of Christ showed himself true;