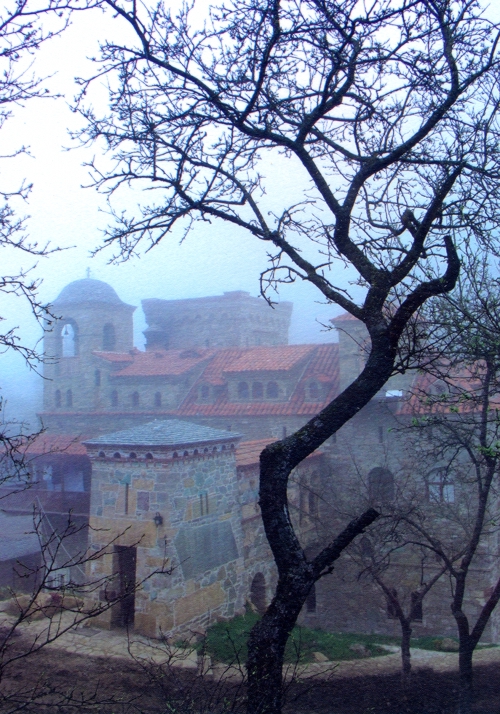 During the primacy of His Holiness and Beatitude Ilia II, the Patriarch of All Georgia and Archbishop of Miskheta and Tbilisi, one more spiritual treasure, the convent of St. Thekla was added to the Georgian Orthodox and Apostolic Church. The convent was founded in 1995, when eight spiritual children οf the Archpriest Teimuraz Chachibaia fulfilled their firm desire to live the monastic life. Due to their common goal, they were attached to each other with bonds of close friendship. read more… Because of their great trust and affection towards their spiritual father, they decided not to separate themselves from him hut instead to found a convent dedicated to the Holy Protomartyr Thekla (because of their particular love to her). His Holiness and Beatitude Ilia blessed their desire and they started looking for an appropriate place for the convent. Doing so turned out to he rather time-consuming and with the blessing of His Holiness and Beatitude Ilia they first settled in an old building near church of St. Νino in Tbilisi, where they stayed for two and a half years. They were looking for a place far from noise and turmoil of tke secular life. For this reason they did not want to settle on some old monastery site where it would he unavoidable to encounter “piligrims” with various intentions and to confront people who cannot tolerate the fact that their rights are restricted and other people are settling in places which they consider an inheritance of their own ancestors, was reason why they purchased a piece of land with a house and other auxiliary buildings in the village Bevreti. This beautiful place is situated in 35km. from Tbilisi in the mountains, in a gorge surrounded by woods at 1.100m. above sea level. The place is known for its severe climate. 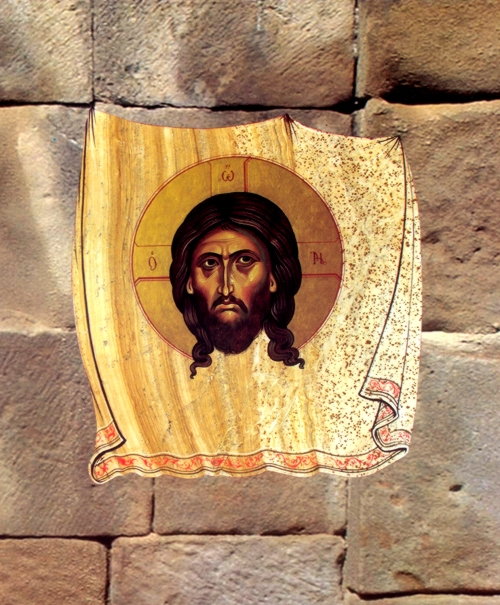 In 1998, Fr. Teimuraz Chachibaia with the assistance of his parishioners started the construction οf the living quarters οf the convent. Progress in construction was uneven, as it depended on the availability of construction materials and financial donations. Because of the severe climate, the construction season is rather short. The construction οf the living quarters lasted for seven years. Construction of other buildings for various monastic needs is still underway. The future buildings include the katholihon (main church), the stone wall and the gate.
As time passed, the number of sisters increased.
But let us return to tne past. Immediately upon finding an appropriate place to live in Bevreti, the sisters moved there and they called it Kalamon (St. Thehla lived on Kalamon mountain near Antioch). A church was needed for the spiritual life of tne monastery and His Holiness and Beatitude Ilia gave his Messing to Fr. Teimuraz to erect a church dedicated to the Most Holy Theotokos, because the special intercession of the Most Holy Theotokos was precisely the reason why they succeeded in finding a place for the monastery after years of searching. But the process of constructing a church would stretch out for many years due to lack of financial resources, and the sisters would have to live in tough conditions similar to those they had before the completion of the living quarters. For this reason His Holiness and Beatitude Ilia gave them a blessing to arrange a chapel dedicated to St. John Chrysostom in an attic.
The first Liturgy was served on July 12 (25 N.C.), on the feast day of Sts. John and Gabriel, the Georgian Athonite Fathers.
The living quarters were blessed on November 14 (27 N.C.), 2004 on the day following the commemoration of St. John Chrysostom.
Currently there are twelve sisters in the convent follows the cenobitic rule of monastic life (the sisters hold all things in common) and it is ruled by the Abbess, to whom tbe sisters show complete obedience.
Time in the convent is measured from sunset, and the whole Typicon of the monastery, both the church and everyday life is based on it. 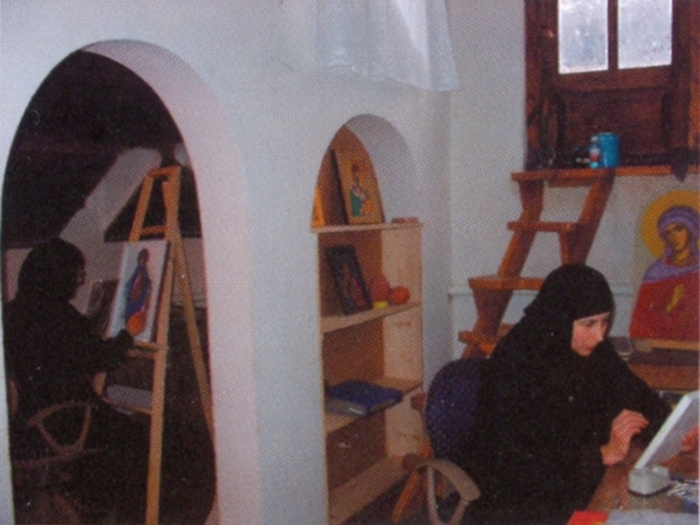 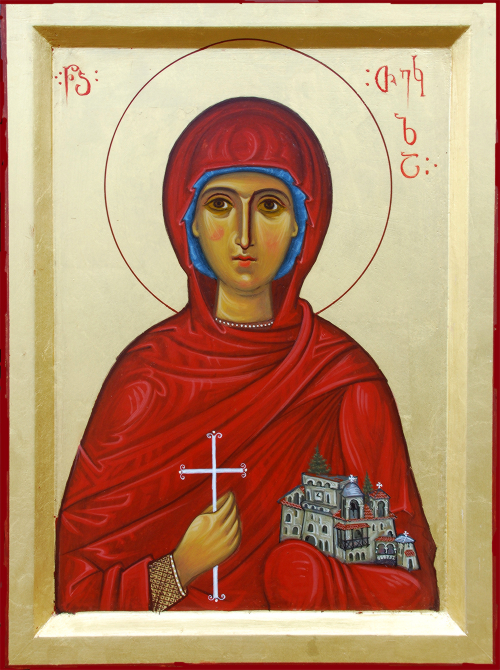 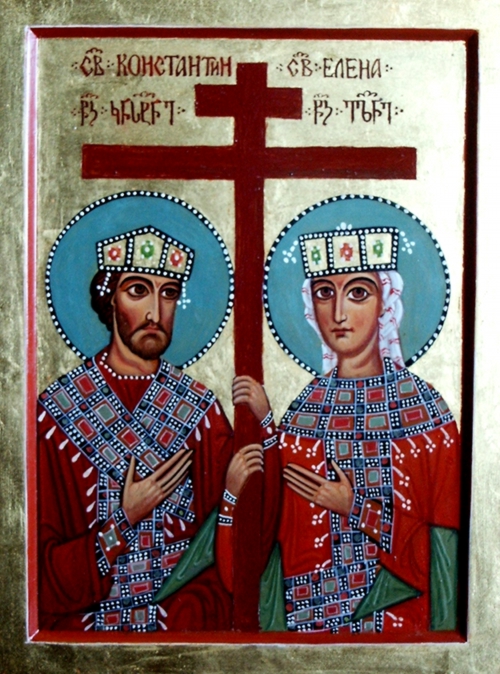 A workshop for painting icons operates in the monastery The main sources of income for monastery are doanations by pious faithfull, icon painting an publishing. Spiritual literature is translated in tbe convent and liturgical books are corrected according to ancient manuscripts. 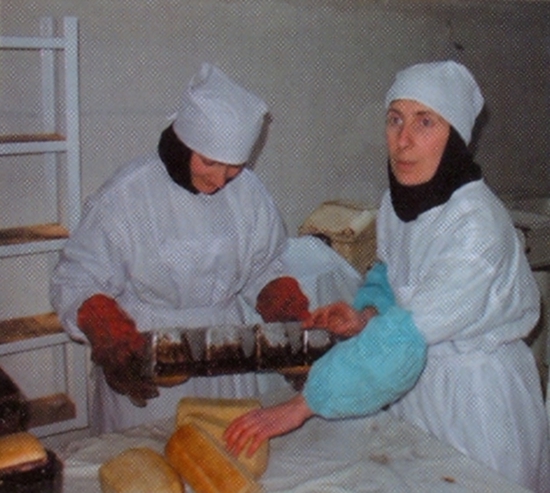 There is a bakery in the convent. The bread is baked with the miraculous Paschal yeast.
The architecture of the living quarters and at first sight might seem foreign to the Georgian tradition, because its style is characteristic of different periods and of different regions of Georgia (Mta-Tusheti, Pshav-Khevsureti, Svaneti, Didgori upland, Racha and others) and has details of Georgian churches, monasteries and castles (which cannot pass unnoticed to the attentive eye and to a person with even minimal knowledge of architecture). Further inspiration came from the architectural styles of the monasteries of the Holy Mountain, the Holy Sepulchre church in Jerusalem and the Georgian monastery Petritsoni (Bachkovo, Bulgaria). The buildings roof is covered with Imeretian tile and Ananuri stone. This type of stone is the most appropriate to the severe climate characteristic of the place.
The liturgical Typikon of the convent begins with Vespers, and consists of Vespers, Apodeipnon (Compline), Mesonyktikon (Midnight Office), Orthros (Matins), Hours and the Divine Liturgy. The Paraklesis and the Akathistos of the Most Holy Theotokos are served daily. Sisters have a personal prayer rule, whick they perform in their cells.
The convent prays for the whole world, for all Orthodox, for the departed in Orthodoxy, for own homeland and for donors and benefactors.
O Lord Jesus Christ, hear the prayer of the sheep dedicate to You, and send down mercy on the earth through the intercession of Your Most Holy Mother and the Holy Protomartyr Thekla, for You are good and love mankind. Amen. 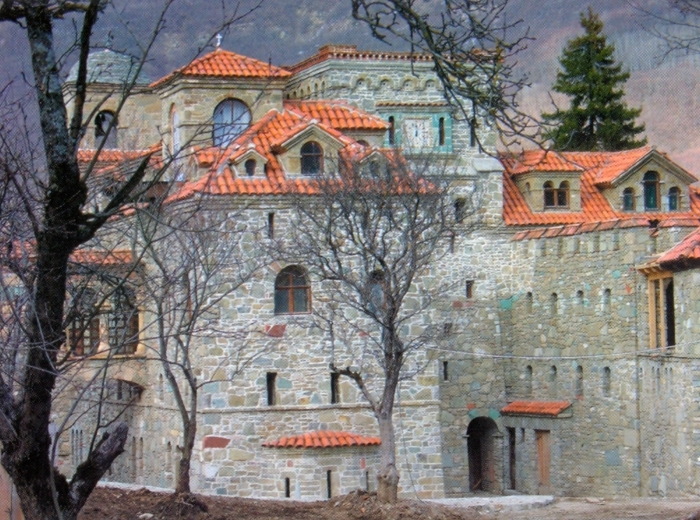 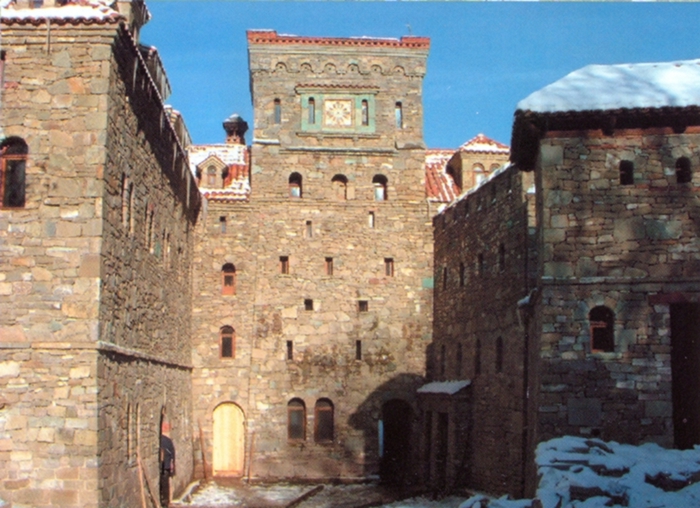 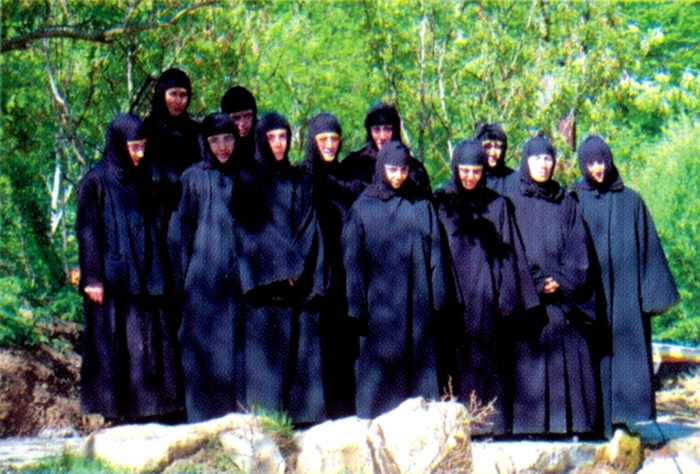 Source: Convent of St. Thekla Kalamon, (bilingual edition in Georgian and English language) 2007
Printed with the blessing of His Eminence Dimitri (Shiolashvili), Metropolitan of Batumi and Kobuleti