Let us prepare ourselves to come open, empty – to be filled with the Spirit

Let us prepare ourselves to come open, empty – to be filled with the Spirit 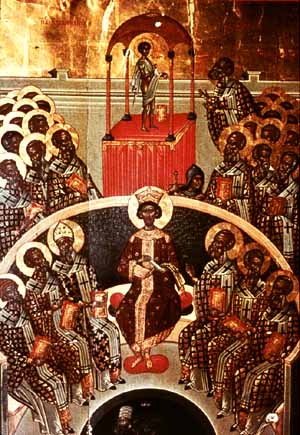 During the Last Supper our Lord Jesus Christ told His disciples that separation was near, that He was to ascend to His God and to His Father as He would repeat again to the women who came to the grave. And when their hearts were filled with sorrow at the thought that they will not see Him again, He said, “Your hearts are full with sorrow and yet, you should rejoice for Me that I am returning to My Father. But I will not,” he added, “leave you orphan, I will send you the Holy Spirit, who proceeds from the Father, whom I will send to you and who will teach you all things.” And so do we here now while we are still in the light of the Ascension.

St. Paul grieved about the necessity of living in the world and in the flesh. He said, “To me life is Christ and death would be a gain, a blessing, because as long as we are in the flesh, we are separated from Christ.” And yet, this separation is not total, we are not separated irremediably, we are not separated desperately from Christ if we only long for Him, if we only love Him as St. Paul who longed to die to be inseparably forever with Him. Because according to the promise the Holy Spirit has come on the day of Pentecost, the Holy Spirit whom we call the Comforter by a word, which in ancient languages has a much wider meaning. It means the one who consoles, the one who gives strength, the one who brings joy. His presence indeed can console us from our separation from Christ because the Holy Spirit, if we only live according to the Gospel, if we become not only in word or in imagination but in all truth, in action and in thought, in our heart and in our being disciples of Christ, the Holy Spirit dwells in us. We become His temples and He speaks to us either in unutterable groaning or with that wonderful clarity that allows us to call ‘Father’ the God of Heaven because in Christ and by the power of the Spirit we have become the children of the Living God.

So the separation from Christ is a separation in space, it is the loss of that moving, wonderful contact of humanity as we know it on earth but it is the beginning of a new discovery of Christ, the Christ not only risen but ascended, the Christ who according to today’s Gospel is resplendent with the glory, the shining that belonged to Him before all ages, the shining, the resplendence, the splendour of Divinity. And it is this Christ whom we meet in prayer, whom we discover through and in the Holy Sacraments, to whom we can get united only by a faithfulness in life, it is this Christ of whom Paul speaks when he says, “We no longer know Christ according to the flesh”. We do not touch Him as Thomas did, we do not hear and see Him as Apostles and the women, and all crowds of people did, but we know the Christ of the Spirit, the risen and ascended Christ, who is everywhere where two or three are gathered together, who is everywhere when a lonely soul cries for Him, when a life is being dedicated to Him.

And so we are confronted with this mystery of a separation, which is a victory, a separation, which leads us to a new knowledge, to a new discovery of Christ. His Divinity is no longer veiled for us by His human presence, He is revealed to us as God resplendent not only in His Godhead but also in His humanity. And so it happens also all the time when people meet on a human level and then discover one another in the Holy Spirit, a discovery that makes humanity resplendent with eternity.

Let us rejoice in the Ascension but also let us remember that in a week’s time we will stand here remembering the day of Pentecost, not only remember it as an event of the past but bringing it back by presenting ourselves to the descent of the Holy Spirit as the Apostles offered themselves to Him in the Upper Room nearly 2,000 years ago. But to do this we must be disciples of Christ, we must be His own, we must be faithful to the word of His preaching, we must follow the example which He gave us, we must truly be in the world in which we live an incarnate presence of Christ and a temple of the Spirit, a vanguard of the Kingdom.

Let us devote the coming week to preparing ourselves by searching our lives, by rejecting at least in intention and determination all that is unworthy of our calling. Let us prepare ourselves to come open, empty – to be filled with the Spirit, so that we truly may be also in an ever-increasing way become the temples of His presence. Amen.