The Nameday of our God

The Nameday of our God 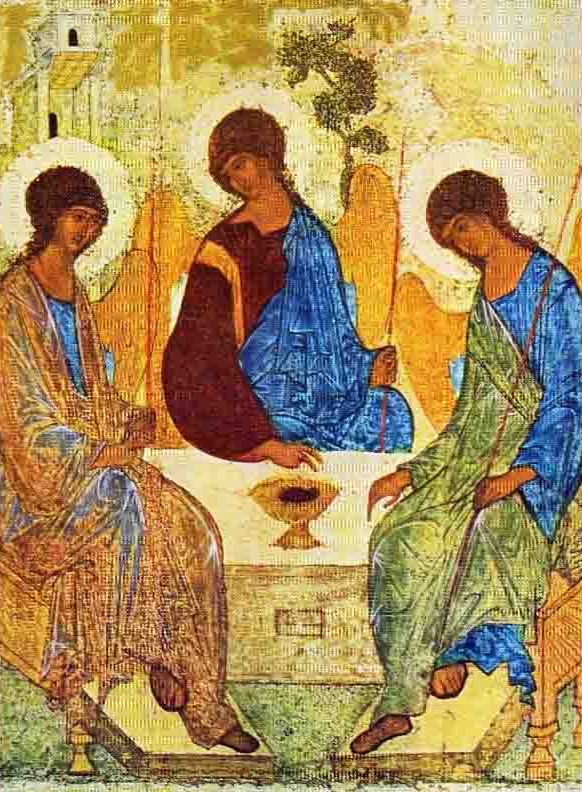 Today is the exclusive Nameday of our God. Although there are three Names, for three separate Persons, yet One Nameday, One God, not three Gods.

Christ defined this in a very mysterious paradox way, when instructing the Apostles: «to make disciples by baptising them in the ‘name’ (in Singular, not ‘names’ in Plural, though He lists 3 Names) of the Father, the Son and the Holy Spirit.» This unusual Singular is contrary to the laws of Grammar but also contrary to human logic. Those who stubbornly attempt to analyse God under the prism of human logic, deprive themselves from a spiritual insight, they restrict themselves from an examination of things unseen and exclude themselves from a heavenly awakening: FAITH.

Faith, not in general, as a value or an idea or concept, but a living Faith in the living God. How is this faith acquired? With the fundamental prerequisite, the absolute acknowledgment that there is Only One True God, then there is also One True Faith. Not a specific version of a person or a nation, but God’s version, a Faith revealed by God. A Proper Faith, a Correct Creed, a Fitting Worship, just as God wanted it, just as He intended it to be: ORTHODOXY.

Lets us now carefully examine these two, logic and faith, so we can then dare to approach the Mystery of the Holy Trinity, and may God forgive us this daring audacity, since the capacity, strength and boundaries of human intellect are very limited indeed.

There are 3 levels of logic:

a. the illogical or para-logical (insensible, crazy)

b. the logical (sensible, comprehensible) and

Faith only belongs to this specific third dimension and should never be wrongly, unfairly attributed to any of the first two spheres. Faith does not oppose science or logic, faith does not contradict our intellect. Faith is a spiritual substance, not a scientific result of intellectual process. Faith is a hypostasis of the soul, not a thesis or stance of academic development.

Faith is a dimension of an illuminated mind and a superhuman strength of a humbled heart, not a praiseworthy achievement of arrogant thought. Faith is a God-given, God-sent gift. It cannot be gained by human effort, exchanged by human offering; it cannot be obtained by deceit or cunningly bought. Faith can never be created or cultivated in a deceived, heretical or blasphemous existence. One would need to have a preliminary awareness of existence as well as an incorrupt faith of the One True God, Jesus Christ, before he can explain (if ever) or describe the Mystery of Holy Trinity, the relation and interaction of these Divine Persons sharing that One Divinity. One would need to experience a revelation of divine grace, subject to a purified body & soul.

Therefore the Mystery of the Holy Trinity is not subject to study. It cannot ever be defined or confined in formula terms. We only dare to describe in a poor failed attempt, in limited sinful reasoning.

The Holy Trinity cannot be, and is forbidden to be depicted, since not all three Persons have incarnated but only One, the Son. Therefore, the only accepted, canonical Icon of the Holy Trinity, is the Three Angels at the Hospitality of Abraham. All other Icons of the Holy Trinity are illegal and banned by the Holy Fathers of the 7th Ecumenical Council, especially the forbidden image that depicts the Father as ‘an old man’, the Son as a Human and the Holy Spirit as a Dove. The Father has never incarnated, never took up the Human Nature, is not “an old man” and therefore can never be drawn as a Human. The Biblical term “the old one of ancient days” (Daniel 7:9, 13, 22) does not refer to age, as some erroneously assume, (does not even necessarily refer to the Father) but to the pre-eternity and ever-existence of God. The Holy Spirit is not a Dove nor a burning bush and should only be depicted as such when the actual Icon narrates the specific Event in which these appearances took place, in those specific forms.

On this Special Feast Day, the actual Nameday of our God, we take chance to glorify Him for revealing Himself to us, for allowing us to know Him, to be with Him, in Him, in His One True Church, the Holy Orthodox Church. This is the proper fitting glory. This is the incomparable, unsurpassed magnitude of Orthodoxy. God is Orthodox. And if we also want to be truly Orthodox, we must evolve and revolve around the recognition and glory of the Holy Trinity. Every action, every decision, every prayer or movement that we make, must always begin with the secret invocation of the blessed, Biblical citation: «In the Name of the Father, the Son and the Holy Spirit, amen.»

Today, anyone baptised in the Name (Singular, because a Plural ‘Names’ would be blasphemous) of the Holy Trinity, is especially joyous in God, for God’s Holy Nameday. Anyone leading an Orthodox Spiritual Life and has basic knowledge of Hymnography, would actually know what an “Apolytikion” really is, and which one exactly, is the Apolytikion of the Holy Trinity and weirdly enough it begins by referring to Christ: “Evloyitos i Hriste o Theos!”= May You, Christ our God, be glorified by us.” The term ‘evloyitos’ does not mean “blessed be our God” because God is already blessed and does not need our blessing, we need His, but it means that God is ought to (should) always be glorified by us, this is why it is elaborated with the completion of “Now and ever and to the ages of ages… The term ‘bless’ in the old Testament and especially in the Psalms, predominantly means ‘glorify’. This is also why in the Lord’s Prayer, the term “ayiashtito” also means “may it be glorified” not ‘Holy’, because God is already Holy by Nature and is the Source and ‘Distributor’ of holiness and we cannot ‘sanctify’ His Holy Name.

God’s Holy Name, is not Jehovah, Adonai, Elohim, as these are only specific Jewish Names specifically used when referring to Jews and speaking in Jewish. God has no need of a “Passport” nor does He use any specific language in Heaven to insist on ‘Jehovah’, this in itself is a very erroneous pronunciation, the more accurate is ‘Jahveh’. When rendered in Ancient Biblical Greek, the Holy Fathers always insisted in using the Name ‘Kyrios’, Lord. The actual Name of God is not Jehovah, but just as revealed to Moses, it is “O On” = “I am He Who Is”.

But the essential Holy Name of the Essence of God exposing the Divinity of God, is primarily, exceptionally, the One, Glorious and Exquisite, Superior and Superb Holy Name:

To Him belongs glory and dominion eternally, amen.