The Kollyvades Movement and its Significance

The Kollyvades Movement and its Significance 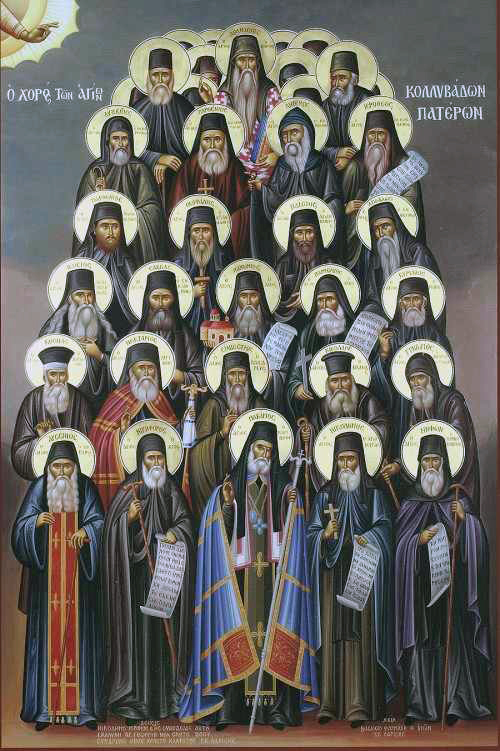 The great teachers of the Church and of the Greek nation, Makarios Notaras, Nikodemos of the Holy Mountain and Athanasios of Paros, who lived and worked in the 18th and early 19th centuries, form a new trinity of shining lights of the Church, like the three Fathers of the Church in the past, relatively speaking of course and bearing in mind the historical circumstances they lived through with their similarities and differences. To these three must be added Neophytos of Kafsokalyvia, who started the movement, although he was not as important or active as the other three would later become, thus earning their place in the Communion of Saints. They were nicknamed Kollyvades by their opponents on the Holy Mountain because they objected to the transfer of the memorial services (involving kollyva) from Saturday to Sunday in defiance of tradition, rightly judging that services for the dead are incompatible with the resurrectional and festal nature of Sunday.

This of course was a minor detail within their greater work of renewal and enlightenment. It was deliberately stressed and exaggerated in order to obscure the importance of their other work, and also to denigrate them as being people who concerned themselves with petty matters, as memorial services and kollyva supposedly were. Even today there are scholars who belittle them and their work, seeing the whole through the distorting prism of the memorial service controversy. Fortunately in recent decades, during which Greek historical and theological research has begun to free itself from Western ties, dependency and influence, their work has been reassessed as an 18th century philokalian renaissance. This renaissance had a decisive impact in strengthening and reinforcing the education of the enslaved Orthodox peoples and in preserving their awareness of who they were, not only vis-à-vis the Ottoman conquerors but also vis-à-vis the Western missionaries who spread out all over the Orthodox world, proselytising by unfair means, and especially by exploiting the ignorance, enslavement and poverty of the Orthodox faithful.

There was a great danger that the Orthodox would convert either to Islam or to a Western form of Christianity. Indeed, the second was the greater danger due to the West’s high level of civilisation, which made assimilation easier, whereas the feeling of superiority to Islam raised some barriers and reservations. There is the classic statement by the other great teacher and saint of that period, St Kosmas Aetolos, explaining why God allowed the Orthodox to be enslaved by the Turks rather than by the Franks [Westerners]: “Three hundred years after Christ’s Resurrection, God sent us Saint Constantine and established the kingdom for 1150 years. Then God took it away from the Christians, and for their own good gave it to the Turk for 320 years. And why did God bring the Turk and not some other nation? For our own good, because the other nations would have harmed our faith, but the Turk, as long as you give him money, will let you do as you like.”

However, after the dark ages of ignorance and illiteracy of the previous centuries, the roots of education were needed to raise a barrier against conversions to Islam or Western Christianity, to prevent a multitude of small streams becoming a river that would sweep away the Nation. What St Kosmas Aetolos did by travelling around the country and founding schools for the people, the Kollyvades Saints did at a higher level by publishing and interpreting texts from Scripture and the Fathers, Lives and Services of Saints, hymns, and even grammar, rhetoric and philosophy textbooks and also ancient Greek and Western classical writers. The aim was to enlighten the Nation and maintain it in its faith and in the traditions of the Fathers, to preserve Greek Orthodox culture. They wanted to ensure that in the schools, which were appearing in increasing numbers, the teachers, monks and priests would be able to understand Greek texts through school education, but also to publish these texts, since the manuscripts were few and far between, either hidden away in monastic libraries or looted by crafty foreign travellers.

One can even discern in their truly impressive educational and literary efforts a special emphasis on action to meet the danger of conversions to Islam or Western Christian denominations. It is well known that many Neo-Martyrs had as mentors, who supported them psychologically on the road to martyrdom, Kollyvades Saints such as St Makarios and St Nikodemos of the Holy Mountain. It is certain that what many Neo-Martyrs proclaimed before the Turkish judges regarding the superiority of the Christian faith to the religion of Muhammed, which they disparage and reject, echoed the teaching of the Kollyvades Saints. Many of these exchanges between these Neo-Martyrs and the Turkish judges, which recall the martyrologies of old, were preserved by St Nikodemos in his “New Martyrology”. The same interpretation must be put on the anti-Western works of St Athanasios of Paros; “The Antipope”, “The Judgement of Heaven”, “That Palamas” and other works on the aberrations and errors of the Latins.

The contribution of the Kollyvades to education and culture was not limited to raising the self-awareness of the Orthodox peoples vis-à-vis the twin dangers of assimilation by East or West, which were very great. It had another, equally broad, dimension, in which they appeared to have less success, not because their teachings were without effect, but because unfortunately, from 1821 the modern Greek state was violently cut off from the Greek Orthodox tradition. It abandoned traditional Greek Christian education and, guided by and in tutelage to the West, turned against its Byzantine heritage, against the Saints and the Church Fathers, against all that was holy for the Nation.

It is known that the Kollyvades Saints, and especially St Athanasios of Paros, clashed with the European and Europeanising supporters of the Enlightenment in modern Greece, who adopted the ideas of the French Enlightenment and the French Revolution, and even the atheism of Voltaire, and who attempted to direct the course of modern Greek culture towards classical antiquity, extolling and stressing the worldly wisdom and knowledge of antiquity while underrating or ignoring divine wisdom. Rationalism, science, knowledge and freedom were the new deities in the Enlightenment creed. The Byzantine synthesis, in which the healthy elements of the ancient Greek spirit were preserved and strengthened and pressed into the service of the divine message of love, humility and reconciliation that derives from the teaching of the Gospel of the Cross, was abandoned and disparaged. It was essentially a new form of persecution of the church, similar to the attempts by the Emperor Julian the Apostate in the fourth century to revive pure Hellenism in the place of Christianity, and by Barlaam the Calabrian in the fourteenth century to introduce into Orthodox Byzantium the scholasticism and rationalism of the Western Renaissance, rejecting the tried and true method of enlightenment and perfection used by the Fathers of the Church which emphasised divine wisdom, but without rejecting worldly or human wisdom. The three Fathers of the fourth century, Basil the Great, Gregory the Theologian and John Chrysostom, with their fine classical Greek education, like St Gregory Palamas in the fourteenth century, barred the way back to an unwholesome classicism that places the created above the uncreated, human wisdom above divine wisdom, as was said by the blessed monk Christoforos Papoulakos on observing the wrong course taken after 1821 by westernised Greek scholars and clergymen, who adopted in their entirety the ideas of the European Enlightenment.

It is worth noting that the revolutionary heroes of 1821, Kolokotronis, Makrygiannis, Papaflessas and others, who had been brought up in the spirit of tradition, felt betrayed on this point. They had struggled to free the Greeks from the Turks in body, and now they saw Greece becoming enslaved spiritually, surrendering her soul, to the Europeans.

Latinisation returned in the form of Europeanisation and Westernisation. The West, which had been unable to “enlighten” free Byzantium with Barlaam the Calabrian, that is to plunge the Greeks into darkness, because St Gregory Palamas reacted with the Hesychast movement, nor again under the Turkish occupation due to the Hesychastic movement of the Kollyvades, attempted again after 1821 by placing the modern Greek state, education and culture under its spiritual tutelage. It seems, however, that it is once again being defeated.

The Kollyvades, reviled even in the name they were given, profoundly influenced Orthodox faith and life as true successors of the patristic Hesychast tradition. Both the Holy Mountain, which bred them, and St Gregory Palamas can be proud of these great teachers of Orthodoxy and the Nation.