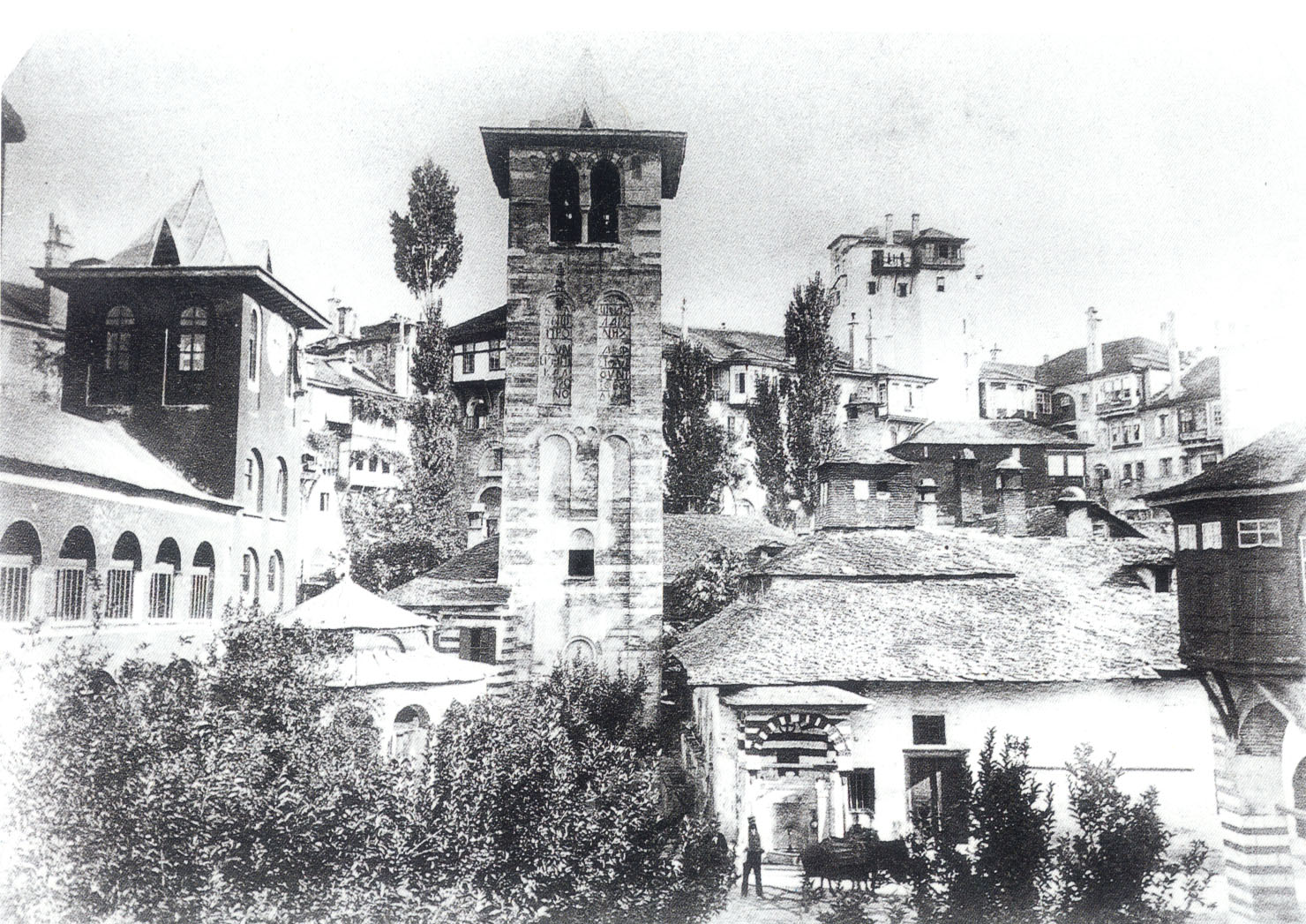 Opposite the entrance to the church stands the Monastery’s imposing refectory. It is built in the shape of a cross and was restored, according to the surviving inscriptions, in the years 1314, 1526 and again in the 18th century. The wall paintings were executed in 1786. The refectory contains 30 horseshoe-shaped marble tables, which, according to tradition, come from the famous Studium Monastery in Constantinople. At the west end, under a vault painted with a depiction of the Platytera (‘Broader than the Heavens’), is the Abbot’s table, which directly faces the altar of the katholikon.

The upper floor of the refectory has been recently laid out as a small guesthouse, where old engravings, porcelain and folk art objects are on display.

South of the refectory and very close to it stands the olive oil store, where the Monastery’s supply of olive oil is stored in large ceramic jars or marble cisterns. The exact date of the building is unknown, but its facade is known to have been put up by the Abbot Theophanes in the year 1627. In this building the small, miracle-working Byzantine icon of Our Lady Elaiovrytissa is kept. Also in the storeroom are two marble sarcophagi, today used to hold oil, one with an inscription with the name of Dionysius and the other, dating from 321 AD, with that of Germanus Heraclas.

The original phiale* for holy water was built at the expense of Matthew Cantacuzenus (1354-1357). The one in use today is a small circular building dating from the early 19th century. It communicates with the exonarthex of the katholikon and is formed by a double co-lonnade, of which the outer columns on the north and south sides have low parapets between them. The basin stands in the centre, sheltered by a dome decorated on the inside with frescos (1810) having baptism as their subject. On the first Sunday of every month, the icon of the Vimatarissa is brought here, together with the cross of Constantine, for the customary blessing of the waters, after which there is procession with the icon.

To the south of the phiale stands the Monastery’s bell-tower, at 35 metres, the highest on the Holy Mountain -and the oldest. It was built in 1427 and today houses eight bells. On the facade this inscription can just be made out:. “The bells above pealing joyously call the faithful unto praise of God. In the year 1427, indiction 5”.

The tower which is incorporated into the south-western corner of the church contains the great clock. The quarters are struck by a wooden negro with a metal hammer and the hours by a bell in the tower. The original clock was given in 1815 to the Pasha of Thessaloniki.

In addition to its main church, the Monastery has 31 chapels. Nineteen of these are among its buildings, and the rest lie round about it. Among the former are those of St Demetrius, St Nicholas, the Holy Trinity, the Archangels, and Our Lady Paramythia, all these being parts of the katholikon Three of these -St Demetrius (1721), St

Nicholas (1780) and the Paramythia (1678)- have wall paintings, the frescos of the latter having been painted at the expense of the Metropolitan of Laodicea Gri-gorios. The three towers of the Monastery contain the chapels of the Transfiguration, the Nativity of the Blessed Virgin, and of St John the Baptist. In the Monastery’s various wings there are chapels dedicated to St Andrew, St George, Sts Theodore, St Menas, the Three Hier-archs, St Thomas, St John the Divine, St John Chrysostom and St Panteleimon (in the infirmary).

Of particular interest are the Chapels of Sts Cosmas and Damian and of the Holy Girdle, which stand in the spacious courtyard. The former, according to tradition, was built by St Sabbas, Archbishop of Serbia, for the liturgical needs of the Monastery’s Serbian monks. In 1364, restoration by the Despot loannis Ugljesa gave it its present form. The first wall paintings were executed at the end of the 14th century; these were repainted in 1847. The floor has old marble inlays and on its eastern columns, the figures of Christ and the Blessed Virgin survive from the original frescos.

The Chapel of the Holy Girdle was built on the site of an older church dedicated to St Constantine, built by the Voivode Neagoe in 1526. The quaint chapel which we see today is a rebuilding by Theofilos Sozopolitis of 1794; the frescos were painted in 1860. The chapel contains two carved wooden lecterns which, tradition relates, were donated to the Monastery by the Despot Andronicus IV Palaeologue. On one of these the 24 stanzas of the Akathistos Hymn are depicted and on the other, scenes from the Old Testament. The gilt iconostasis of carved wood dates from the year 1816 and, from the point of view of artistic merit, is considered the third in rank on the Holy Mountain and the finest of the eight such screens in the Monastery.

The library and the archives of the Monastery are housed in the north-eastern tower, the Tower of Our Lady, as it is called, since on its first floor there is a chapel dedicated to the Nativity of the Virgin. In former times the library was housed above the iner narthex of the katholikon, in the so-called ‘place of the catechumens’, but the demands of safety and space were such that in the last century it was moved to the tower, which has four floors and now houses some 2,000 manuscript codices and a number of the 40,000 printed books.

The archives contain priceless chrysobulls issued by Byzantine emperors, patriarchal sigillia, wax bulls, documents originating with princes of Serbia, Bulgaria and the Danubian Provinces, Tsars of Russia and a wealth of firmans and berats issued by the Ottoman Sultans. It also has, because of the large number of metochia which the Monastery once held in Wallachia and Bessarabia, the largest Romanian archive (approximately 14,000 documents) on Mount Athos.

On display in a case on the ground floor are some of the Monastery’s most important codices:

maps of Europe, Asia and Africa, the oldest copy of the

11th century, with the signature of the Emperor Con-

most richly decorated codex on the Holy Mountain, with

165 miniatures with scenes from the Old Testament.

d. Fragments from the four Gospels of the 6th—8th

e. A chrysobull of the Emperor Andronicus II Palaeo-

f. A palimpsest codex (the original text being of the

8th-9th century with sermons of St John Chrysostom on

the First Epistle to the Corinthians, overwritten with a

Framed on the walls are firmans and berats of the Sultans of the Ottoman Empire and letters of appointment, that is, documents belonging to the various bishops who have been monks of Vatopaidi.

On display in the same area is the famous iaspis (=jasper), one of the Monastery’s most valuable treasures. This is a royal drinking cup, the gift of Manuel Cantacuzene Palaologue, Despot of Mystras (1349-1380), carved in the semi-precious stone from which it takes its name. This multi-coloured transparent stone was believed to have the property of turning water into an emulsion which was a specific against snake bites. According to old written sources, it was also used as a container for holy water, which had healing properties. The base of the cup is gilt and bears the monogram of the Despot, together with the figures of saints in relief.