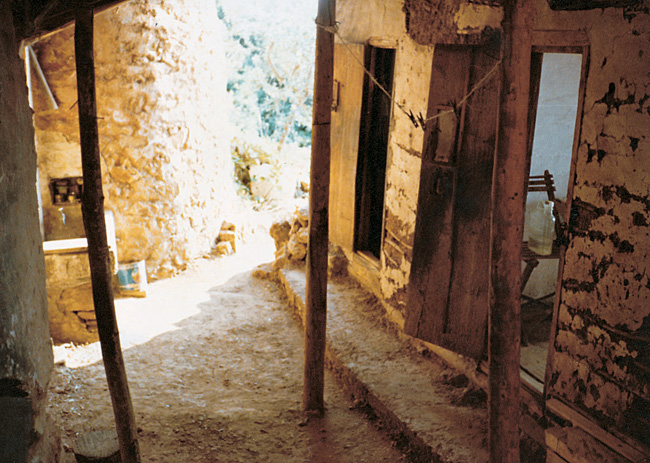 3. On Regime and Disorder

Among the duties which the ever-memorable Elder taught us during the first days of our life under him was that of good order and keeping to a regime, while he described disorder to us in the blackest of colours. He often quoted to us the saying of St Ephrem the Syrian, ‘Those who have no guidance fall like leaves’ – which signifies, as he told us, the lack of any regime. He was also in the habit of referring to various incidents in the lives of more recent Elders and particularly of the Elder Theophylact from the hermitage of St Artemios, who was renowned for his virtue and spiritual gifts.

The Elder Theophylact lived his whole life as an ascetic and hesychast, keeping a strict fast: he did not even eat oil. At one time he accepted a disciple, the future Father Arsenios, and told him laconically – because this blessed father was temperate even in his speech – ‘Listen, my boy: if you are going to stay will me, I want you to have order and regime in your life, because without these you will never become a monk. Look round at our things as I show them to you. There’s our jug, there’s the cup, there are the bowls, there are the rusks and so forth, as you can see. I want them always to be in those places. If you happen to make a mistake, the first time I’ll remind you of their proper place according to our rule, but I won’t tolerate it the second time. If you continue this disorder a third time, I shall ask you to take your things and go so that at the least you won’t trouble me, even if you youself don’t want to profit at all.’

The ever-memorable Elder told us that he had heard of the Elder Theophylact that he was a man of watchfulness, and his intellect was often caught up into visions because of the purity of his mind and his spiritual state. ‘Once,’ he told us, ‘I heard that the demons seized him and took him out of his cell in winter time when it was snowing. They dragged him about naked in the snow all night long till morning, and then returned him safe home. That day other Fathers brought back some of his clothes, which they had found where the evil spirits had flung them. Perhaps they had done it to interrupt his mind in its contemplation, as they often used to do with earlier Fathers.’.

Once, it is said, a roebuck came to the Elder Theophylact’s cell at night and knocked on the door. When the Elder answered the door, it showed him its leg which was broken, and he bandaged it up and told it to come back in eight days, which it did, at the same hour. The Elder changed the dressing, rebandaged the roebuck’s leg and repeated his instruction to come again in eight days’ time. When it came back the next time, the Elder saw that its leg was healed and told the roebuck not to come again, and it obeyed!

One of the main characteristics of these blessed spiritual warriors was their strictness in keeping their rule of life. We could see this also in our own Elder, and he demanded the same of us. He told us that the beginning of acquiring character and personhood lies in insistence on following an ordered and systematic way of life. By making the decision to maintain an invariable regime, man acquires resolve and bravery, something very important and essential in our life since our contest is a struggle and, indeed, a fierce one. The serpent who ‘prowls round like a roaring lion, seeking some one to devour’ (1 Pet. 5:8) – and not just to injure somewhat – can be confronted only with bravery and strength of resolve.

There is another equally imperative reason for order in keeping to a regime: the mutability of man’s unstable character since the fall of Adam. And the general sinfulness which each of us carries with us also dulls our courage and resolve. Equally inexperience, ignorance, the unknown form of the invisible war and the inequality of this struggle naturally increase one’s discouragement. No other human factor is such an aid to success as our firm and steady resolve and a carefully worked out regime.

Particularly characteristic in the lives of the Fathers is their insistence on order and the typikon as the principal elements in their way of life. Our Elder was particularly attached to the book of St Isaac the Syrian, which he used almost as a manual. He would recite whole chapters to us by heart, particularly those concerning order and rule in our monastic life, from introductory ‘action’ to the contemplation even of perfection itself as far as is possible for man. I remember how many things he reminded us of from the seventh discourse, On order among beginners, and their state, and what pertains to these. The main thing, which I still remember now is this noteworthy sentence: ‘Wherever you are, consider yourself less than your brethren, and their servant.’

From the beginning the Elder had inclined towards the life of hesychasm and isolation, and it was only natural that this should dictate a generally more austere manner of living. This is of course commonplace in those who live permanently as hesychasts, whose situation and manner and the means they use are different from those of the common coenobitic form of life pursued by most monks. Even in earlier days, as the Fathers write, people of this sort always seemed austere at first sight. As a result, mildness in behaviour is not in their character; this probably comes about without their noticing, as a result of being isolated and somewhat antisocial. I remember something of the kind in the Life of Abba Palamon, to whom St Pachomius, later to become great in virtue and the founder of systematic coenobitic monasticism, went as a novice.

We asked the Elder a few times about the austerity of his own regime, and he responded with positive examples from the lives of the ancient Fathers. Those ancient Fathers were in no way unaware of the duty of loving one’s neighbour, yet they gave priority to love for God and the form of their particular watchfulness in the hesychastic way of life. Since we were making our way towards the same end, he often quoted to us the words of Abba Isaac, that the essential precondition for the monk to make progress is ‘to collect himself in one place and to fast always.’

I paid more attention, however, to another point of orderliness, which though it may seem elementary held great significance for our first beginnings. This was the help afforded by precise observance of the typikon, which we maintained wherever we were, regardless of place. By not contravening the typikon at all, our fervour was not decreased, nor our ardour, nor our prayer, nor our (generally) inspired state. But when it happened that we did contravene our usual rule, whether of diet or of silence or of being on our guard in general, then everything was thrown into turmoil and we had great difficulty holding onto our usual practice. After a number of mishaps, this finally became a clear lesson to us.

From time to time, in our childish naivete we overstepped the bounds of propriety and on one occasion we asked the Elder, ‘Since in character you aren’t strict with other people, but very sympathetic, how is it that you seem so harsh in the regime of our typikon, which creates an obstacle for people?’ He smiled and said to me, ‘I never expected you to have the face to ask me that, but I’ll tell you. Testing and experience have convinced me to act in this way: otherwise, I would not be able to continue what God has led me to. St Paul says, “If I do this of my own will, I have a reward; but if not of my own will, I am entrusted with a commission”’ (1 Cor. 9:17). The Elder told us this with some effort, but he firmly believed that his dedication to his hesychastic regime was not fortuitous, but a vocation from on high.

As he told us, ‘To accept people’s demands with no restrictions is the common path of the all the Fathers, and this, by the grace of God, is abundant in this sacred place. Anyone can easily find a response anywhere. But our duty of serving as hesychasts in the sacred tradition of stillness is not known to all nor attainable by all. While St Gregory Palamas was concerning himself with stillness during his days here on Athos, he would run away and hide and dig holes in the ground, and do everything he could to achieve isolation. Whom did he receive then, or whom did he meet? It is incontrovertible proof that regulation in life is the main factor in spiritual progress. This is the purpose of the laws and commandments which have been given to human life since most ancient times, whether by God or by men. The disturbance in the integrity of our character following the Fall of our first parents called for legislation to restore equilibrium to the faculties of soul and body which had been split apart. And when are law and commandments and regulation not necessary? Answer: when man regains his personhood through divine grace and “the mortal puts on immortality” (1 Cor. 15:54) in St Paul’s words, and what is mortal is swallowed up – so to speak – by life (2 Cor. 5:4). Then, and then indeed, “no law is laid down for the just”’ (1 Tim 1:9).