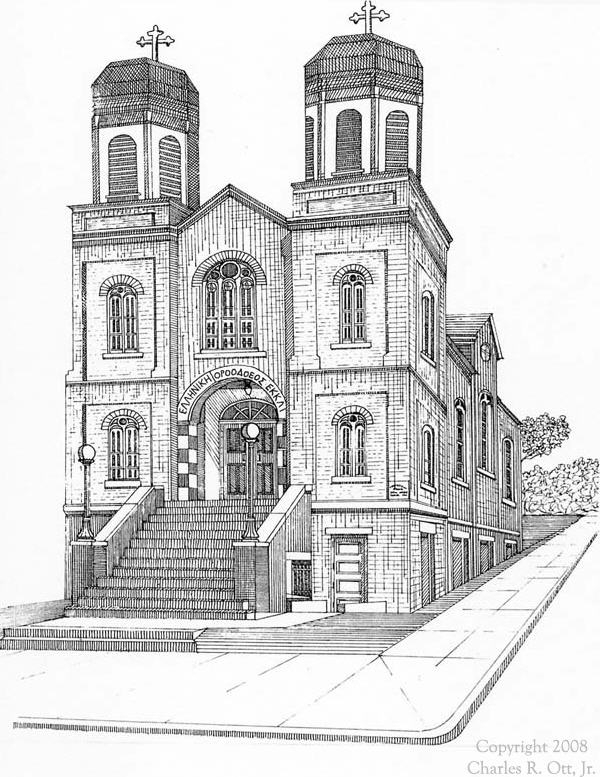 Modern culture frequently celebrates the freedom we each enjoy – in come cases going so far as to think of human beings as discreet individuals. Of course each of us lives in his/her own body – but even as such – we live in a common world. What I do and how I live affects others whether I want it to or not. In one manner or another, we live on the consequences of those who have gone before us – our landscapes – our resources – the shape of political boundaries – the language we speak – generally the whole of our life – is something that is being shared with us – again, whether we want it to be so or not.

There is a more profound sharing that takes place within our lives. That sharing is found in the communion, the participation (koinonia), which we have in the life of Christ and, because of Him, in the lives of each other.

In a number of spiritual writings within the Christian East, the word anadoche is used to describe an aspect of this sharing and participation. It’s meaning (at least at the time of its adoption into the language of the Church) is roughly translated, “responsibility.” It seems to have been borrowed from the world of ancient banking in which it has something of the meaning of “surety,” as in to stand surety for the debt of another.

Within the Church it began to be used to describe certain aspects of our mutual existence. Thus the sponsor at Baptism is sometimes referred to as anadochos – someone who is standing as a guarantor of another’s life in Christ. It is also used to describe the relationship between confessor and penitent and between Spiritual Father and disciple. Particularly in the role of Spiritual Fathers, the understanding of anadoche becomes important. The disciple renders obedience to his elder, but his elder bears far more – taking upon himself the burden of another’s salvation.

This, of course, is perhaps the most extreme example of a spiritual principle. That it is possible to take such a reponsibility, to “bear one another’s burdens” as St. Paul describes it – is only possible because our lives are not discrete individual events -but rather a deeply enmeshed communion with the lives of others and everything around us.

I recall some years ago discussing a mistake I had made (canonically) with my Archbishop. He had the authority to punish me for my error (by suspension for a time) or to be harsh in lecturing me, etc. Instead, as a kind father, he listened to my account, noted my ignorance, corrected me, and then said, “Fr. Stephen, you and I will have to bear this.” I was overwhelmed at such mercy. I was not excused, nor was my failure treated as of no consequence. But I was assured by a more mature elder in the faith that he would share the burden of my action. This is anadoche.

When we pray for others, to some extent we enter into a relationship of responsibility. I do not necessarily take something away from someone else, but I willingly thrust myself into the living communion established in Christ, and unite my life with theirs in a mysterious manner. To pray “for the world” is thus not a light thing – but the greatest possible burden. Christ bears the burden to its fullest possible extent. He took upon Himself the sins of the world. This is God’s great anadoche. Christ has become the surety of a better covenant (Heb. 7:22).

But because our lives are united in a communion established by Christ, there are other forms of responsibility, or sharing, as well. We are commanded of Christ not to judge another “lest we ourselves be judged.” This teaching is far deeper than a warning that God will do to us what we do to others. Indeed, God is far more merciful. Rather, Christ’s words are a warning that judging is a dangerous activity.

Thus we are told by St. John:

God is light and in Him is no darkness at all. If we say that we have fellowship with Him, and walk in darkness, we lie and do not practice the truth. But if we walk in the light as He is in the light, we have communion with one another, and the blood of Jesus Christ His Son cleanses us from all sin (1 John 1:5-7).

For a similar reason we are taught to “honor our father and mother.” We share a very deep communion with parents and ancestors. To curse them is to curse ourselves. We cannot make it be that we have no father or mother. We can extend the light of Christ even to our past and our foundation, or we can make ourselves stand on a foundation of darkness – a deeply dangerous thing to do.

The world largely lives in a communion of darkness. This is the character of life outside of Christ. It is also the character of many whose lives profess Christ as Lord and Savior. The call to everyone, believer and unbeliever, is to walk in the light. For some such an invitation comes as a relief. To others, it can be heard as a threat or a burden too hard to bear.

Christ has not offered us threats and has asked us only to share in the burden which He Himself carries. Our part of the load is miniscule – such is His mercy.