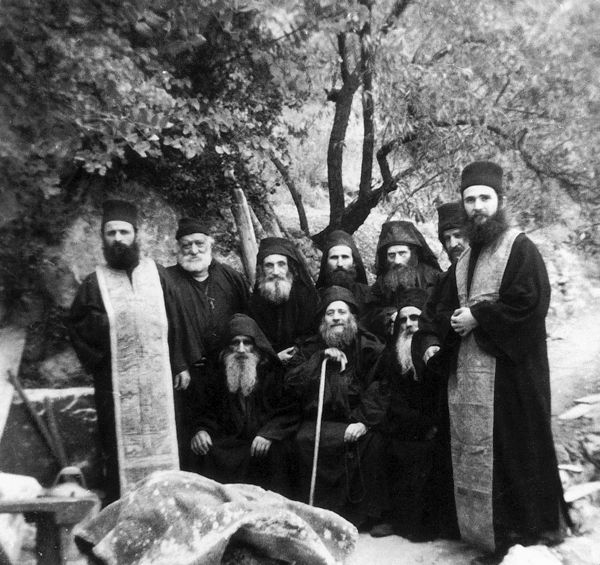 3. Settlement in Katounakia with the elder Ephrem

They thanked the Elder and promised obedience.  Once they had received his blessing, it was not long before they discovered the elders Joseph and Ephrem at the nearby hut of the Annunciation.   These were brothers according to the flesh from Albania, and were both very old.  They had lived in that spot since their youth, striving well and with arduous ascetisism, according to the tradition of Athonite monasticism.  These Elders were successors of the first monk to live at the hut, Nicodemus of Dionysiou, a scholar, writer and hesychast.

This Father Nicodemus is worthy of all honour and praise: in his godly fervour, he left his position as superior of Dionysiou monastery, where he had distinguished himself, settled in that place, initially on his own, and built the hut with a chapel dedicated to the Annunciation of the Mother of God.  This ever-memorable athlete of the spirit also left there some patristic books, fine ones for those times, as well as manuscripts of his own, which his successors later dispersed as dictated by the spirit of poverty.  So the two Elders, Joseph and Ephrem, were indigenous hermits and heirs both to the strict life and to the blessing of their distinguished Elder.  Apart from these two there had been two others, all of them brothers according to the flesh.  Nicholas had died; Nicodemus had gone to New Skete and settled in the hut of St Anthony, where he had acquired a disciple, Joseph the mortar- and saddle-maker, as he was known from his occupation.  At that time the third of the brothers, Joseph, also died, and there remained only the Elder Ephrem the barrel-maker, so named because his work consisted of was making wooden barrels for wine and doing other kinds of woodwork.  He was a simple man, guileless, peacable, quiet, incredibly silent and full of goodness.

Old Ephrem could not express his joy at the presence and obedience of his two young disciples.  He would often weep with emotion and joy seeing the willingness and devotion of his new disciples, who lost no time in adapting themselves totally to the entire regime and rule of his life.

The simplicity of the Elder Ephrem, and his desire not to hinder the young men’s zeal for the struggle that they longed for, meant that their regime was organised in such a way that unnecessary contacts were restricted as far as possible, and that their work – which was usually unpaid labour – involved a minimum of care, so that inwardness and prayer could be cultivated all the more.  Sometimes, when their regime was disrupted for no reason and the young men complained to the elder, he would answer that he did not like it either, but ‘I don’t like to say anything to them.  I’m not happy with this habit, and I’ve suffered with it all my life.  You take the initiative, so that we can preserve our peace as far as possible.’ Unfortunately, in addition to everything else there was yet another thing that interfered with their peace and quiet.  It was an old habit for all the monks living in the area to take a short cut through the yard of their hut on their way to Katounakia and back.  Another local practice was for the ascetic fathers in the area to be enlisted (voluntarily, of course) for the various tasks to be performed at feasts and festivals.  In addition, the job of making barrels created no less of a disturbance, especially at the times when everyone needed barrels made or repaired, and under pressure of time they insisted on quick service.  All these things taken together ran strongly counter to the new community’s regime, and it was only natural for frictions to develop.

The two young men and particularly the younger, our future Elder Joseph, who had the experience and the flame of prayer, did not give in to any compromise, because whenever it happened that he omitted to hold onto prayer, he experienced a great compulsion.  I believe this will be familiar to those who have found within themselves the operation of prayer, which compels its workers not to neglect it.  In order to be able to put more effort into prayer, which, according to the Fathers who specialise in it, requires stillness and in particular guarding of the intellect, at the edge of the area where they lived he constructed a sort of cave, with boards at the sides, under a great overhanging rock.  He would go there every evening at sundown for six hours, and say the prayer continuously.  He sat on a little wooden stool and kept his mind in his heart.  This was a form of special and intense spiritual struggle over and above the other normal monastic duties.  After this daily hard struggle, he would go to his cell and rest.  In order to achieve precision, he had an alarm clock.  He would set it for six, and that was the sign for him to end his daily rule.  He would place it some distance away so that it did not disturb him, and he would hear it only when the alarm went off.

In character the Elder Joseph was resolute, courageous, uncompromising in his regime and orderly, something that he always kept up even at difficult moments in his life.  Of all his efforts, which required constant ascetic labour, his most important preoccupation was prayer.  Prayer in its real sense, as grace taught him to keep his mind in his heart.  He carried on this struggle most assiduously and did not allow any other occupation to take its place, even if it were something scheduled.

On one occasion it was a feast of the Lord, I think Epiphany, and Father Arsenios and the Elder Ephrem went to a vigil nearby, as was their custom.  Our Elder, however, did not go, but stayed in his artificial cave occupied with inwardness and prayer.  ‘As I was sitting there immersed in myself,’ he told us, ‘and noticing the sweetness of the prayer, all of a sudden I was filled with light – not like the daylight we see, of course – and then it grew so that the whole place became light.  Suddenly there appeared three little children, about six to eight years old, completely alike in appearance so that it was impossible to make out any distinguishing feature.  They were so charming and so lovely that the sight of them captivated all my senses.  I did not feel anything else, I just admired them.  They were a short distance from me, a few yards away, walking towards me with the same rhythm, the same step, the same movement.  All their movements and their features were as if they were one, and yet they were three.  And they were singing, very melodiously, the verse, ‘As many as have been baptised into Christ have put on Christ, alleluia’.  When they were very close to me, so close that I thought I could have touched them if I had stretched out my hands, they moved rhythmically back again, without turning their backs, and continued the same hymn; and at the alleluia they blessed me with their little hands, as a priest does’.

When I asked him, out of curiosity, what he was thinking during those moments, he told me that there are no thoughts or questions at that time, because the mind that is held captive by contemplation and suffused with light by divine grace does not have any activity of its own.  ‘The only thing I remember’, the Elder went on, ‘is that I was in such a state of bliss that I felt something akin to what Peter said, “It is good for us to be here” (Mt 17:4), and I was wondering, how do they know how to bless when they are so young? This lasted as long as the divine grace and love for mankind wished it, and then the light went away along with the trio of little boys; then I came to myself and saw that my usual time had gone past, because the alarm had gone off a long time before without my hearing it.’

After this aid, the grace of prayer increased and his yearning for stillness grew even more, and his mind was not occupied with any earthly thing.  Their trials multiplied, however, and the resistance offered by their surroundings was no longer bearable.  One of two things had to happen: either they could abandon their own regime and way of life and conform to the demands of their environment, or they could leave and go somewhere else where the locality would further their own purpose, and they preferred the latter option.  The Fathers round about were dear to them, and any disagreement would have been senseless.  So the young men called their Elder Ephrem and told him in detail what was happening.  He understood the situation himself, and they asked his opinion as to which would be the more beneficial course of action.  When they found him in agreement that peace and quiet would be preferable to a disagreement with the Fathers, they decided to leave that place once and for all and establish themselves at St Basil, a lodging which was higher up, isolated and quiet.  During their stay at Katounakia the Elder Ephrem gave Elder Joseph the Great Schema; his tonsure took place in the cave of St Athanasius, with the spiritual father who lived there serving as priest.