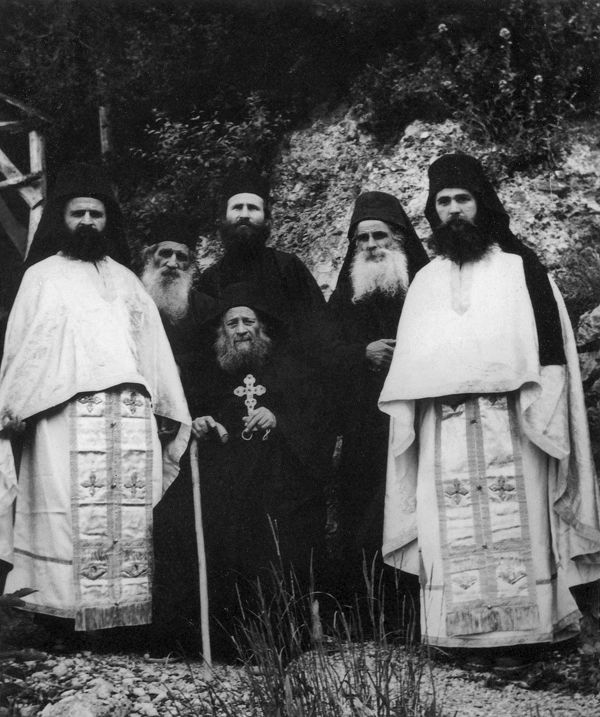 2. Initial Difficulties and Aid from Grace

asion that presents itself arouses enthusiasm and interest. The remote and peaceful surroundings of Vigla, untroubled by any care or noise, especially attracted the attention of the young ascetic. He at once began a more detailed search for a place in that general area where he could stay longer. His first impressions from the lives of the Fathers that he had read had left a deep mark on his imagination, and he could not believe that there did not still exist the same conditions and the same ways of life as then. To inexperience and fervour, everything is possible. He believed that there must be inaccessible ascetics, naked, free from care, concerned solely with prayer and contemplation. Fantasy arising out of ardent zeal is an acute temptation for the inexperienced, until experience changes their frame of mind. So because he needed to be independent in order to carry out his search and make a mature choice, he did not want to undertake obedience at once to the existing Elders, but wanted to remain free for the time being.

Accordingly, he asked one of the elders in the hermitages there to let him live with him for a short time until he could make a decision about the future. They made an agreement, and he gave a small sum in payment for this hospitiality out of the meagre savings which he had kept for his journey. But the old man quite failed to keep his promise, and soon deprived his new lodger of every freedom as if he were his actual Elder. This elder had an idiosyncratic way of life. He was absent most of the time, going round the monasteries and in particular to the nearby ruling monastery of the Great Lavra. So the young ascetic found plenty of time to carry on his struggle as he saw fit. He would often go to the cave of St Athanasius and meet the spiritual father who was living there as a hesychast, a peacable and tranquil man, patient and full of forbearance. But this was not to the liking of the elder he lived with, who observed it when he was home from his travels, and he began restricting the young man through penances and behaving violently and harshly towards him. So our young man was forced to make other arrangements and find a different place to stay.

As he told us later, ‘I was trying to explain in my own way the state of affairs and the way the elder was behaving to me, and I burst out with a lamentation. I was inconsolable because I was longing so ardently to find what I had set out for in search of God; and not only was I not finding it, but people were not even being helpful. As had been my habit before, I went again to an isolated place like a cave and began to weep in great awe before God. “God full of goodness,” I said, “You that know all things, and have brought even my worthless self from the vanity of the world and given me the strength to follow You – why have You forsaken me? I don’t want compromises, and, as You know, I ask Your mercy and grace so as to follow what You have taught me through the lives of Your saints. Help me, all-good One, and do not forsake Your creature, because You know that I have nothing in this world apart from Your goodness, since I heard Your voice and abandoned everything. Teach me to do Thy will, for Thou art my God! (Ps. 143.10).”’

As we said before, it is not surprising in the initial stages if inexperience and extreme zeal lead to omissions and excesses. The judgements of God’s all-saving providence are like an abyss, and do not just tolerate the pure motives behind such intentions, but in infinite wisdom even put them towards our future advancement.

Energetic and intelligent as he was by nature, it did not take him long to notice the prevailing indifference and even various forms of mockery from those whose observance of the Athonite way of life was a mere formal. He had been hurt by this whole state of affairs, which was not as he had expected, and by an episode created by the elder he lived with, and he withdrew to his usual place and began beseeching God with tears. ‘I wept so much that day,’ he told us, ‘more than ever before. In a way I was complaining to God that He had not helped me as I had trusted. I begged Him and said I wouldn’t go away unless He showed me His mercy and gave me courage. I addressed my supplications to our Lady, too. As I was there looking towards Athos – you could clearly see the place where the church of the Mother of God is – I seemed to feel a thrill of joy within me, and all at once I saw a ray of light come out of the church of the Mother of God, and like a rainbow it came and rested on me. At once I was completely changed, and forgot myself. I was filled with light in my heart and outside and everywhere, and I was not aware that I even had a body. And the prayer began to say itself within me, so rhythmically that I was amazed, because I myself was not making any effort. It was as if I had two selves, because I could see my inner state, full of light and spiritual fragrance and joy with the prayer going on constantly, but I was also wholly covered with light and was wondering at the majesty of God’s mercy. Vaguely, as far as it is possible to examine one’s thoughts at such a time, I was thinking that this is Grace, which comforts those it wills, according to the tradition of the Fathers. I don’t know how long this state lasted, then that pure white light withdrew to where it had come from. Then I came to myself and saw that I was still in the place where I had started to pray. But I concluded that quite a time must have past, because it was nearly sunset. Then the elder I lived with called me; he was sorry for his earlier outburst, and we went back to the hut together. From that time, the state of prayer never left me. Without effort it repeated itself in my heart, but it did not have the same extraordinary energy as when it first came.’

After that, he tried to spend all his time in quiet places, remote and suitable for stillness and prayer. He left Vigla and went round the various caves and places where, according to tradition, spiritual men had lived or passed through, and he strove to keep hold of the prayer within him. He would make brushes from the tops of bushes, as they do on Athos, and take them to the gate of the Lavra. There he would be given a rusk to put in the bag he always carried with him; that would last him for some weeks, then he would do the same again. All that summer he travelled around Athos. Especially he frequented the chapel of the Mother of God on the slopes below the peak, from which the great event had happened to him, and he cultivated prayer punctiliously.

On the day of the Transfiguration he went up to the peak with the fathers who were celebrating the feast, and there he met Father Arsenios, who was to become his inseparable companion and partner in struggles.

Father Arsenios was already a monk of the Great Schema, from Stavronikita, which was at that time idiorhythmic; he had settled there in order to devote himself to greater asceticism and poverty, which had always been his wish. He was originally from Pontos, but the brutality of the Turks had forced him to move to the Caucasus. At a very young age he had visited Palestine, and his search for quiet and humble surroundings where he could devote himself uninterruptedly to spiritual struggle led him at length to the Holy Mountain.

At that time, Father Arsenios was living in the northern central area of Athos. He was interested in stillness and was looking for it, but could not make up his mind to start off on his own. When he heard that there was a young monk eager for that life living near the Lavra, he set off to meet him. So it was that they met, at the feast of the Transfiguration on the peak of Athos. They talked for a while, agreed on the regime that they would follow and decided to carry on their struggle together. Then they went to consult the discerning elder Daniel at Katounakia as to where and how to begin their spiritual struggle without the danger of delusion, but with the blessing of the Elders and with the sure protection of God’s grace. When the mild and fatherly elder heard their decision and was satisfied of their good intention and zeal for the spiritual struggle, he did not dissuade them from their good purpose. But he did advise them imperatively not to start out without sealing their work with the blessing of obedience. The wise elder, whose words were always seasoned with salt, said to them laconically, ‘Do you have an Elder? Without the blessing of your Elder, nothing can prosper. Without this seal of a paternal blessing, no spiritual work in our own monastic life bears fruit. This is why I insist that you pass through this requirement, that the grace of God may be with you throughout your lives. Go to an old man, however simple he may seem, and submit yourselves in obedience to him; and when he dies and you have laid him in his grave, you will receive as your inheritance the blessing of God, accompanying you and leading you to advancement of every kind.’

Of course, it was impossible not to heed him. Their divine zeal for finding the right path and the weight of this holy elder’s advice made them receive what he said with no hesitation. As they told us later, they received the Elder’s words as the word of God, as a real revelation.